EXPOSED: How Zuma got off the hook 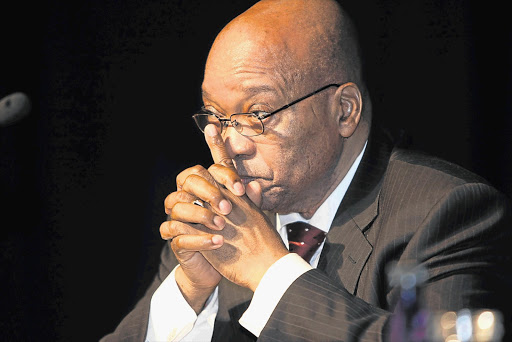 South Africa's top prosecutors were overwhelmingly in favour of pressing ahead with the corruption case against Jacob Zuma and had dismissed the so-called "spy tapes" as irrelevant just days before the charges were sensationally dropped in April 2009.

This is revealed in more than 300 pages of explosive internal e-mails, memos and minutes of meetings leaked to the Sunday Times.

The documents raise questions over why then-prosecutions boss Mokotedi Mpshe ignored all their advice and let Zuma off the hook, citing the "spy tapes" as evidence that Zuma was the victim of a plot.

They also lift the lid on the high drama and intense internal wrangling that put SA's criminal justice system on trial in one of the most dramatic episodes of the country's recent past. The documents reveal for the first time that the Scorpions team prosecuting Zuma:

The documents include minutes of a briefing held in Mpshe's boardroom on March 18 2009 by asset forfeiture unit head Willie Hofmeyr and Pretoria prosecutor Sibongile Mzinyathi - the only two NPA officials who listened to the tapes.

The minutes reveal that Zuma's lawyer, Michael Hulley, approached Hofmeyr with "new evidence" that he said warranted dropping the charges against Zuma - phone taps of Scorpions boss Leonard McCarthy - that he asked Hofmeyr to listen to.

Hulley did not disclose evidence of these "spy tapes" in written representations he made to the NPA on Zuma's behalf weeks earlier. The tapes "seemed to be" from the National Intelligence Agency and would be used by Hulley to argue for a permanent stay of prosecution.

According to notes made by Hofmeyr and Mzinyathi while they listened to the tapes, the recordings reveal McCarthy was "part of a campaign for Thabo Mbeki" to win the ANC elective conference in Polokwane in December 2007, which Zuma won. But Hofmeyr and Mzinyathi's notes also state that Mbeki had told McCarthy not to charge Zuma and former police commissioner Jackie Selebi before Polokwane.

Notes from the meeting say the team prosecuting Zuma "was not aware of this manipulation and conspiracies - they followed the evidence. Unfortunately, I doubt if any will ever believe them. This is a sad, sad day in the history of SA!!!".

These new documents intensify the mystery of why Mpshe would take a decision diametrically opposed to his senior prosecutors working on the case, and is likely to add weight to a case brought by the DA to have it reviewed.

They reveal that on at least two occasions after the "spy tapes" briefing - on March 20 and on April 2 2009 - prosecutors sent a memo to Mpshe urging him to press ahead with the Zuma prosecution. Attached to one of the memos was a letter prosecutors expected Mpshe to sign and send to Hulley, rejecting the "spy tapes" as a reason for dropping charges.

"A decision not to prosecute ... would undoubtedly be regarded by many as simply caving in to political pressure," the letter, which was never signed by Mpshe, reads. "After anxious consideration, I have concluded that my decision to indict your client in 2007 was not influenced, improperly or otherwise, by McCarthy."

The letter also states that Hulley's threat to include allegations of political interference based on the "spy tapes" in a court application, and his "observations that this would be a great embarrassment to the NPA and the persons concerned" amounted to "blackmail".

"We consider that the oral representations [from Hulley about the tapes] do not change our recommendation [to charge Zuma] and we stand by it," Downer states in a memo on behalf of the prosecution team sent to Mpshe on March 20 2009.

"To accede to [Zuma's] representations, apart from being contrary to the merits and the interests of justice, would not be appropriate. Such a course of conduct, however weighty the reasons given in support thereof, will forever leave the impression that the NPA has become a pawn of the political establishment and cause irrevocable damage to public confidence in the system of justice."

Mzinyanthi - the only other person who listened to the tapes with Hofmeyr - and Thanda Mngwengwe, the former Scorpions boss who charged Zuma in 2007 - also reportedly wanted Zuma's prosecution to go ahead despite the "spy tapes".

Despite this, on April 6 2009, Mpshe announced that charges against Zuma would be withdrawn because the "spy tapes" contained evidence that McCarthy and Ngcuka had conspired to remove Zuma from office.

Only Hofmeyr apparently believed that McCarthy's "alleged prosecutorial misbehaviour" warranted dropping the charges against Zuma, according to one memo.

After Mpshe made his bombshell announcement of dropping charges , a flurry of e-mails and memos reveal how unhappy other top prosecutors were with his decision. In one sent to Mpshe on April 14 2009, setting out the team's reservations, Downer states that the "legal motivation" for the decision is "questionable and may be vulnerable on review".

He criticises the prosecution boss for relying "heavily" on the "abuse of process" doctrine in the UK and Canadian law, without any reference to SA law. "We are concerned that this doctrine may have been inappropriately applied without due consideration of its applica-bility in our law."

The key issue, whether the abuse of process would have prevented Zuma from having a fair trial, "was not even addressed", the memo states. Moreover, two key questions - whether McCarthy's manipulation of the prosecution improperly influenced Mpshe's decision to charge Zuma after Polokwane, and whether he still considered that the decision to prosecute was correct - were never answered. "This failure appears to us to be fatal to the correctness of the decision," the memo states.

One memo, titled "Combined team synopsis of the November/December 2007 decision to prosecute", states that Scorpions investigator Johan du Plooy objected to McCarthy's plans to serve summons on Zuma at Nkandla on December 26 2007. Du Plooy considered this "outrageous and unsafe", and the plan was shelved. Two days later he joined the sheriff in serving the summons on Zuma at his Joburg residence.

E-mails also reveal that after being briefed about the "spy tapes" Mpshe repeatedly tried to reach McCarthy at the World Bank, where he now works as vice-president of integrity, to get him to answer the charges of being part of a political conspiracy.

"It would appear, on the face of it, that the recorded conversations may damage your integrity," Mpshe wrote in one e-mail. "They include that you may have been party to a conspiracy to use the NPA's prosecution process irregularly to attempt to influence politics."

McCarthy eventually replied that he deemed Mpshe's questions "irrelevant" and declined to answer them.

DA chairman James Selfe said this week that the NPA was clearly in contempt of court by not handing over the "spy tapes", which Mpshe said in 2009 were independently obtained and declassified.

Despite the court order given in March, the DA went back to court in September to force the NPA to hand over the tapes - a case only likely to be heard early next year. "We'll go to the Constitutional Court if we have to. We'll go to the gates of hell to get this," said Selfe.

Hofmeyr and Downer referred all questions to the NPA, which declined to answer them. Asked if it had caved in to blackmail by dropping charges against Zuma despite strong opposition within its own ranks, NPA spokesman Bulelwa Makeke said: "This is a sideshow that the NPA would rather not be part of at this point, as it is still awaiting a court ruling on this matter."

Ngcuka failed to answer questions he asked to be sent to him. McCarthy and Hulley didn't reply to e-mails or messages left for them.