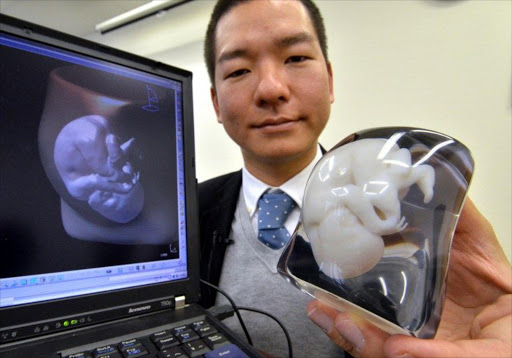 Expectant parents in Japan who can't wait to show the world what their baby will look like can now buy a 3D model of the foetus to pass around their friends.

The nine-centimetre (3.6-inch) resin model of the white foetus, encased in a transparent block in the shape of the mother's body, is fashioned by a 3D printer after an MRI scan.

"As it is only once in a lifetime that you are pregnant with that child, we received requests for these kind of models from pregnant women who... do not want to forget the feelings and experience of that time," said Tomohiro Kinoshita of FASOTEC, the company offering the service.

The "Shape of an Angel", which costs 100,000 yen ($1,200), comes with a miniature version that could be a nice adornment to a mobile phone, he added. Many young women in Japan have decorations attached to their cellphone strap.

The company said the ideal time for a scan is around eight or nine months into the pregnancy.

For those who would like a less pricey version, the company will start offering a 3D model of the face of the foetus at 50,000 yen in December.

It will use ultrasound images taken at a medical clinic in Tokyo that has forged a tie-up with the company.

FASOTEC, originally a supplier of devices including 3D printers, uses a layering technique to build up three-dimensional structures. The technique has been touted as a solution to localised manufacture on a small scale.