SAA bailed out of crisis 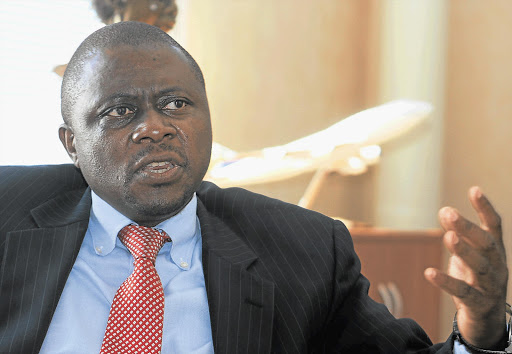 SOUTH African Airways averted a festive-season crisis that would have resulted in its planes being grounded and thousands of passengers stranded this week.

The Sunday Times can reveal that the national carrier hit an all-time low when it had to get an emergency short-term loan to cover fuel costs for local and international flights.

Finance Minister Pravin Gordhan and Public Enterprises Minister Malusi Gigaba signed off on a guarantee last weekend that enabled airline executives to secure a R550-million bank "facility" for fuel and other short-term commitments.

Gigaba's spokesperson, Mayihlome Tshwete, said airlines all over the globe had experienced financial challenges in the past few months because of the "volatile economic climate".

"This is not unique to SAA. This was, in fact, foreseen by the national carrier in its request for a [R5-billion] government guarantee.

"As management, we will not expose the airline to the possibility of being grounded at any time," he said.

Tshwete refused to speak in detail about the bailout, citing confidentiality and competition issues.

"The minister, along with SAA, have insisted on some level of transparency with regard to challenges ... That comes with the understanding that transparency must inform South Africans, but not in a manner which hampers SAA commercially," Tshwete said.

The Sunday Times has established that the R550-million is a loan that has to be repaid over the next three months.

The embattled airline experienced a change of guard in September when former chairwoman Cheryl Carolus and various others resigned from the board, citing strained relations with Gigaba's office.

This followed tension over a request for a R5-billion guarantee from the government to keep the airline afloat.

It led to the appointment of Vuyisile Kona as chairman of a new board, but he has since taken over as acting CEO of the airline, while Duduzile Myeni is acting chairman.

Kona this week would only admit that the airline faced serious financial challenges. Asked about the loan for fuel, he referred the Sunday Times to Gigaba's office.

The grounding of the airline this week would have left scores of local and overseas passengers stranded after the holidays.

The state carrier has 102 local and international flights ferrying about 30000 people daily. As a state-owned enterprise, SAA is a key strategic asset for South Africa and grounding it would have hurt not only its reputation, but also that of the country.

Kona said the new team at SAA was not simply sitting back and banking on a government bailout, which is due shortly.

He said the airline's fuel contracts were under review because he did not believe that SAA, as the biggest buyer of fuel in South Africa, was getting the best deal.

"I'm not happy with the pricing. In fact, I am getting better deals overseas," said Kona.

A tender for fuel supply was recently advertised and there had been favourable responses, especially from overseas-based companies, he said.

In addition, Kona said emergency measures were already being put in place to curb other crippling losses across some of its subsidiaries.

Kona said they included a review of aircraft leases in a bid to secure better rates for SAA.

He confirmed that intervention teams had been dispatched to its catering division, Air Chefs, as well as technical services, which needed to be turned into a productive unit.

The Sunday Times understands that Air Chefs is losing about R7-million a month owing to overstaffing and wastage such as ordering too much food for flights.

Kona said: "Technical Services is no longer doing the technical work that is supposed to be done. All our engines are being sent overseas for maintenance at considerable expense.

"We are the only MRO [maintenance, repair and overhaul] facility in Africa that has a test cell where we [can] test engines. But we are not using it. The engineers that we have are master packers. They simply remove the engine from the wing and ship it overseas."

The airline would soon send more than 100 technicians for training overseas to learn how to service jet engines so that SAA could also provide this service to external clients.

Kona said the airline was putting together a submission for board approval about this.

"I've said we are not going to be shipping any work overseas. We've got a certain range of engines that we want to fix, so they must be trained."

Other interventions include reconsidering the fleet and route strategy and working to improve staff performance and productivity.