Travellers' Tales: The battle for America 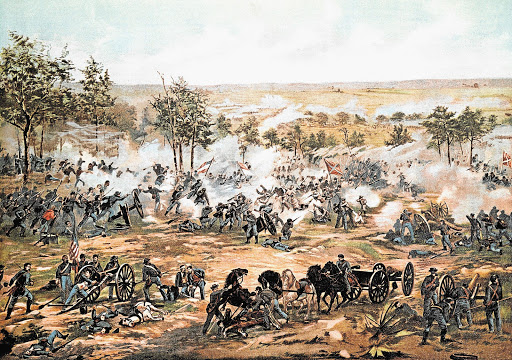 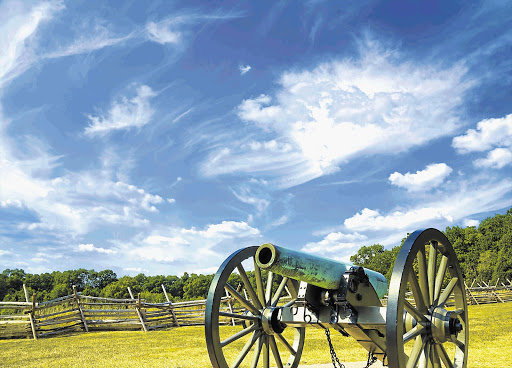 150 years after one of the most decisive clashes of the US Civil War, Kathy Arnold visits the sites of the fighting - and of President Lincoln's Gettysburg Address

'Stop here," said our guide, Rob. Reining in our horses, we looked across farmland crisscrossed by split rail fences. Only a warbling bluebird broke the peace. But exactly 150 years ago, 12000 men from the Army of Northern Virginia marched out of the woods behind us and into the open. Massed ahead of them on Cemetery Ridge was the Union army.

"It was like a tsunami of grey Confederate uniforms," Rob explained. By dusk, half of those Southern troops were dead or wounded. This was Pickett's Charge, the disastrous manoeuvre that ended the Battle of Gettysburg. The defeat of General Robert E Lee's seemingly invincible troops turned the tide of the American Civil War.

Today, some 1300 monuments and memorials are spread across 2400ha. There are also plaques that explain what happened on those sweltering days of July 1-3, 1863. Although there are many ways to explore Gettysburg National Military Park, riding a horse helped to take me back in time: I saw the war zone as generals at the time would have seen it.

Having grown up in Ohio, I am a Yankee through and through. However, although I studied the Battle of Gettysburg at school, my recall of the details was sketchy. Thankfully, the first-rate film and museum in the park service's visitor centre reignited memories of classroom discussions about states' rights, secession and slavery. Not forgetting Britain's position: despite the Abolition Act of 1833, Lancashire mills still depended on slave-labour-produced, raw Southern cotton.

The battle lasted three days and involved 165000 soldiers; total casualties were 51000, the highest of any battle of the war. What brings the final day's fighting to life is the Cyclorama. As I stood in the middle of this enormous 19th-century circular painting, sound and light effects added to the vivid imagery: horses bolted, cannon fired, men screamed. It seemed all too real.

Providing a different reality are the re-enactors, camped here on summer weekends, ready to talk to visitors. Behind the imposing memorial to troops from Pennsylvania, members of Battery D ate, drilled and fired muskets as if it were 1863. "Back then, artillery was an art form more than a science," one told me. "There was so much variation in guns, powder and fuses." On hearing that I was off to talk to the enemy, they warned me: "Don't tell 'em where we're at; we'll hang you as a spy." Over in the Confederate lines, the talk was of dwindling supplies. "And the British," one solder complained, "are selling arms to both sides."

Today, the battlefield looks much as it did 150 years ago. Hedgerows have been replanted; 20th-century intrusions, such as a motel, have been removed. Gettysburg itself retains its 19th-century character, with brick pavements and Georgian-style buildings.

"People stop and ask us where the battlefield is," one local told me. "It was here: the town was right in the middle."

On Baltimore Street, Confederate sharpshooters fired at Union soldiers from the windows of what is now Mr G's home-made ice-cream shop. Bullet holes still scar the walls and photographs show the small cellar, where the family then living there hid.

More strategically important was the main hall of the Lutheran Theological Seminary. Perched on a hill, the four-storey school was occupied by Union troops, then captured by the Confederates, before ending up as a field hospital. To mark the anniversary, the former hospital dormitory opened on July 1 as the Gettysburg Seminary Ridge Museum, providing an alternative account of the battle. Instead of focusing on generals and tactics, the exhibits are about townspeople and individual soldiers. I listened to readings from diaries and letters and winced as a doctor sawed on a mannequin's leg.

Two little books, published in 1857, stopped me in my tracks: Slavery Ordained of God and God Against Slavery. Back then, the issue divided friends and families, religious groups and political parties. Some Southerners were anti-slavery; some Northerners believed in a state's right to self-determination. A computer screen presented me with scenarios from everyday life. Say a runaway slave knocks at the door. In this edition of The Moral Maze circa 1860, the question is: What would you do? Turn him in? Send him away? Shelter him? Like the folks back then, I had to choose.

Before leaving, I climbed the wooden stairs to the cupola, a vital military vantage point. I looked down on the town, the battlefield and the surrounding countryside. Northwest were the hills, where the Confederates camped; to the south was Little Round Top, where they were repulsed by Union troops. And, there on Cemetery Hill, was the Soldiers' National Cemetery.

This burial ground for 3500 Union dead was dedicated five months after the battle. At the ceremony, the main speaker was one Edward Everett. No one remembers him or his two-hour speech. Abraham Lincoln was invited to give a "few appropriate remarks". The 10 sentences that he read out on November 19, 1863, are among the most powerful ever spoken by an American president: the Gettysburg Address.