Bets worth over £1 million on Britain's royal baby 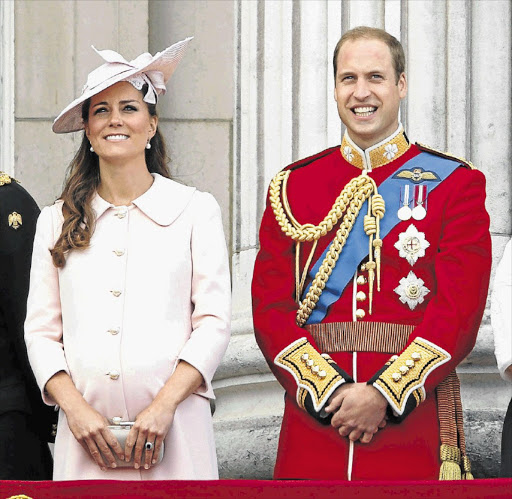 Kate and Prince William at one of the Duchess of Cambridge's last public appearances before the birth of their child. File photo.
Image: GETTY IMAGES

The long wait for the birth of Prince William and his wife Catherine’s royal baby is big business for Britain’s bookmakers.

Punters around the world are betting on a girl called Alexandra to be born, well, any day now.

And with footballer David Beckham joking that the child should be named after him, the temptation for people to wager on every detail grows with every day the infant bides its time.

Bookies say bets on the name, sex and date of the first child of the Duke and Duchess of Cambridge are drawing a record number of bets for a non-sports market, worth over £1 million (1.1 million euros, $1.5 million) so far.

“It is the biggest novelty market we have ever seen,” Gary Burton, from the British betting firm Coral, told AFP on Monday.

“We did the pope, we did reality TV and this is by far the biggest we have had. It’s getting busier and busier the more it goes on and the more coverage it gets.”  Coral alone had taken more than £500 000 in bets on the royal baby, he added.

Bookmaker William Hill said it had taken £100 000 from punters in 100 countries.

Bets include a huge £1 000 bet from a punter in Austria on a male baby in the last week.

That is at odds with most people, who believe it will be a girl following a slip of the tongue by Kate earlier this year when she appeared to start the word “daughter” when talking about the baby before cutting herself short.

One punter placed £5 000 on a baby girl with Coral at the weekend.

Meanwhile the refusal of Buckingham Palace to name the due date beyond saying that it would be in July — later reports suggested the middle of the month or specifically the 13th — has led to a flurry of speculation.

“Every day that passes we presume tomorrow must be the day that it will arrive,” said Joe Crilly, a spokesman for William Hill.

“That is also driving people to have another wager.”  But while betting on the day constantly changes, favourites for the royal baby’s name have remained broadly similar for weeks.

Coral last week suspended betting on the name after a string of bets were placed on the favourite, Alexandra, in the space of a couple of hours — all in central London where the royal family are based. It is now taking bets again.

Alexandra has topped the odds for weeks with most bookmakers offering around 6/4. The fact that it is the middle name of the royal baby’s paternal grandmother — none other than Queen Elizabeth II herself — has helped it top predictions.

Other favourites for girls include Charlotte, Victoria (after Britain’s longest-reigning monarch) Elizabeth (the queen’s name, as well as Kate’s middle name) and Diana (the name of William’s late mother).

For boys James — the name of Kate’s brother — and George lead the pack.

A top outside tip is however said to be Louis, which is not only William’s middle name but also the first name of his father Charles’s mentor Louis Mountbatten, the former Viceroy of India. He was killed in an Irish Republican Army bomb in 1979.

Despite Beckham’s tongue-in-cheek suggestion in an interview on Monday that the baby should be called David the name seems doomed to remain an also-ran, with odds of between 33/1 and 100/1.

The football icon was invited to William and Kate’s wedding and worked with the prince on England’s failed 2018 World Cup bid.

Royal baby fever is also driving bets on details such as the baby’s weight, with Coral halving the odds on the baby tipping the scales between 3.18 kilos and 3.6 kilos.

There has even been a series of bets that the baby will be born in the evening. The speculation here is that if the baby is late then it will be induced, and that doctors will opt for the nightime amid an ongoing heatwave in Britain.

Burton said the bookies’ biggest fear was of an insider bet from someone with knowledge about the baby, but added that such was the size of the market now that it would likely be cancelled out.