Fear those drivers who fear 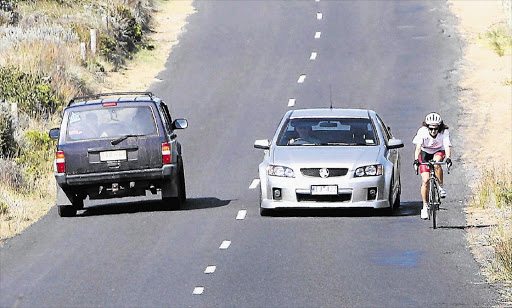 We South African drivers have a lot to moan about. Taxi drivers and, supposedly, corrupt traffic officers are high up on the list of complaints, but what we don't moan about enough is a particular group of bad drivers - the ones who suffer from various phobias which make them awful motorists.

If you don't recognise any of these you might well be one of them.

DRIVERS WHO ARE AFRAID OF CYCLISTS

Don't laugh. This is a real phobia known as cyclophobia which, researchers believe, is prevalent in people who never learnt how to ride a bike or have traumatic memories of being taught.

When a motorist with that emotional baggage of cyclophobia encounters a cyclist, he or she freezes and all but goes berserk - doing two things that endanger the lives of those around him or her, while psychologically linking childhood bike riding memories with the cyclist on the road.

Firstly, they will hit the brakes with both feet in an attempt to stop the imaginary bicycle from their youth which, in turn, freaks out the person behind, who is no doubt talking on a cellphone. The biker, oblivious to the emotionally damaged motorist, rolls along smoothly.

The driver comes to and attempts to pass the cyclist, but suffers another brain freeze after having flashbacks of a childhood self, wobbling uncontrollably on the free-wheeling bike.

The motorist tries to pass again, leaving a wide berth which others might leave for a herd of cattle.

The bad news is you might not know you are a cyclophobe until it is too late, which could explain why you drive for ages behind a solitary (and understandably nervous) cyclist.

The good news is, cyclists appreciate you not running them over.

DRIVERS WHO ARE TOO AFRAID TO LET OTHERS DOWN

Too much civility can be a pain in the behind.

When you merge onto yield-controlled roads, it should be a seamless alternating motion.

But, once in a while, we encounter an overly sensitive driver who will let every single car in ahead of him or her while building up traffic - and increasing temperatures - behind them.

You know the driver I'm talking about; usually a little old lady who smiles widely and nods non-stop as she allows cars in.

Note to all: "after you" only works with one car. Instead of allowing traffic to flow, being super polite actually confuses other drivers.

SECRET AGENTS WHO LURK IN YOUR BLIND SPOT

Blind spots are exactly as the name suggests - areas around your vehicle that you cannot see just by using your mirrors.

Motorists who were shown how to drive by a legitimate teacher will know it is a bad idea for a vehicle to be in another person's blind spot.

Generally, drivers glide in and out of your blind spots but some motorists think they are secret agents.

They mysteriously lurk in your blind spot as if they are attempting to avoid detection.

Being the responsible driver you are, (or perhaps just an overly suspicious Johannesburger who doesn't want to be a hi-jacking statistic), you accelerate, but the secret agent also accelerates and when you slow down, he or she does the same.

The best thing to do in such circumstances is to change lanes.

Given that South Africans have a less than rosy attitude towards general road safety, it may be safe to assume that road planners have equally little trust in the driving skills of most motorists.

Understandably, they erect barriers to keep distracted, drunk and stupid drivers on the correct side of the road at all times.

Similar to those who fear cyclists, there is a type of driver who feels a tad claustrophobic and is petrified of plastic or concrete barriers.

Instead of driving alongside them at a safe distance (not providing a wide berth), these drivers constantly veer so far to the left they might as well be driving on top of the vehicle in the next lane.

The situation is worsened when construction barriers are used to form a single lane.

Can you spell hyperventilation?