A brief history of the cast-iron potjie pot 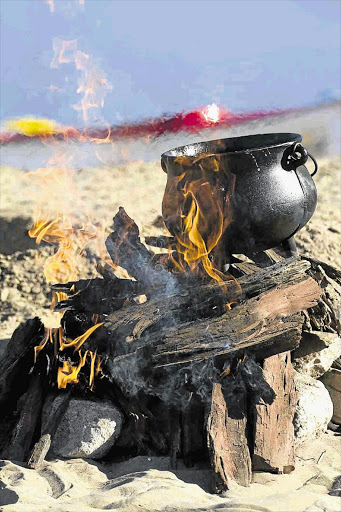 There's something so relaxing about slow-cooking over the coals.
Image: Supplied

There is some magic to the potjie pot, so it is not surprising that its history goes back to the time of witches and druids.

Cast iron existed as cookware in Europe since the iron age, but the three-legged pot is believed to have arrived in Africa in the 17th century with the early explorers.

Potjiekos emerged in the Netherlands and Spain, when communities would cook together during wartime. The pots are likely to have arrived in SA from the Netherlands with Jan van Riebeeck. The early settlers would shoot wild game and add it to the existing pot, daily.

It was adopted by the indigenous people, who replaced their clay pots with the iron potjie.

The first local manufacturer of the potjie pot was the now-defunct Falkirk company.

Distributor Lionel Leethem said Chinese-made potjie pots are in abundance now, but Falkirk was the only supplier for nearly 70 years.

"It was a superb pot. It was thick and heavy, so you would need only a little coal to heat it and it would retain that heat to slow-cook food. It had health benefits, especially for children, because of the iron that was transferred from the pot. It tenderised even the poorer cuts of meat."

The Falkirk pots travelled all over Africa and were so popular that there was an 18-month wait for them.

"Some components are manufactured overseas according to Saint-Gobain specifications. We sell them under the Best Duty brand."

Kapotis says the pots are made from 95% iron, 3.5% carbon and 1.5% silicone. The slow-cooking process means nutrients are retained. The round belly keeps liquid at the bottom of the pot and evenly distributes heat, allowing for even cooking.

Kapotis says a potjie pot should be cleaned with a sponge, dried over a heat source and oiled with vegetable or olive oil. Leave a paper towel inside to absorb any moisture.