Inside the walk-in vagina 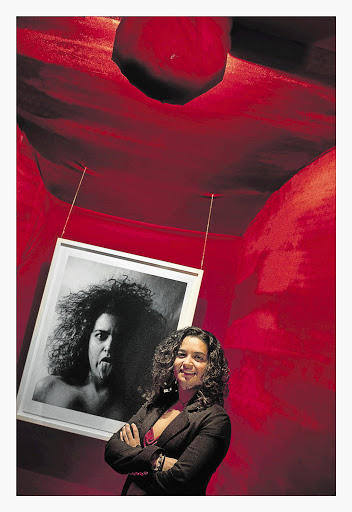 IT is impossible to miss: a giant vagina that fills Section Two of the Women's Jail in Hillbrow, Johannesburg.

You have to walk through it, shoeless, for 12m through the red-cotton-and-velvet cavity with a soundtrack of screams and mocking laughter. The experience can be daunting.

Chhiba, who was educated at Benoni High School and raised in a traditional but not strictly orthodox Hindu household, says this exhibition personifies the Hindu goddess Kali "and I confront the idea of the vagina as a space where power is centred".

Her exhibitionThe Two Talking Yonis - Yoni is Sanskrit for vulva - is in three parts: this installation, photographs and paintings.

They are exhibited in different spaces in Johannesburg and are part of a dialogue with curatorial studies lecturer at the University of the Witwatersrand, Nontobeko Ntombela, that has fuelled the show: a discussion about feminism, being black and being a woman.

Chhiba says she has always been fascinated by the horrors and sexuality of Kali, goddess of time, creation and destruction.

Kali's identity and image is riddled with myths and legends, but also with metaphors.

It is always surprising to see how frankly Chhiba, physically refined and understated with a mass of kiss-curls covering her head, speaks of sexuality; how she draws from the rich reservoir of her own cultural knowledge, blends it with her university-taught values and makes work that rocks your equilibrium.

"At some point what I am doing will be misunderstood," she told Art South Africa in 2008.

"My people were sceptical about my doing this degree [her undergraduate fine arts degree, which she finished in 2005], but now they hide their faces because I have achieved something."

She recently completed her master's in fine art at Wits.

Chhiba, co-winner of the Wits fine arts award, the Martienssen Prize, in 2003 and an art mediator - or intern curator - at one of the world's most important exhibitions of contemporary art, documenta 12, in Kassel, Germany, in 2007, talks of how "another Hindu goddess, Adya Shakti, is represented in ancient sculptures crouching to show her vulva. This ancient knowledge is now lost or dominated."

Ntombela talks about how feminist art, which grew from the social movement in 1950s America, aimed to shock. But, says Chhiba, some of its central ideas, like that of the vagina dentata (vagina with teeth) come from the east.

Chhiba and Ntombela laugh at crude assumptions which seem a kneejerk response to work of this nature. "It's not like we don't like men. We love men!"

Ntombela says: "It's fundamental that this project is not shown in a dark corner; it is in a space with a harrowing history".

Chhiba says: "By creating this vagina which you walk into, it contains you as the viewer, but also screams and laughs, almost like a battle cry which revolts against the jail.

"And yet it's a global vagina. I don't want to be seen to be the girl who makes Indian art," she grins, speaking of Mudiyettu, a folk theatre from Kerala, India, in which the battle between Kali and the demon Darika is enacted.

"Only male dancers are traditionally allowed to perform this myth. My work twists this tradition." Chhiba has pictures of herself as Kali, her hair wild, her tongue stuck out.

The artist, who works as the registrar at the Johannesburg Art Gallery, has performed the Bharatanatyam genre of Indian dance since the age of eight and co-founded a classical dance school.

But back to the giant installation: "Not many people - men or women - are unfazed about walking through this vaginal canal," Chhiba says dryly.

I certainly felt horrified to even think about walking it.