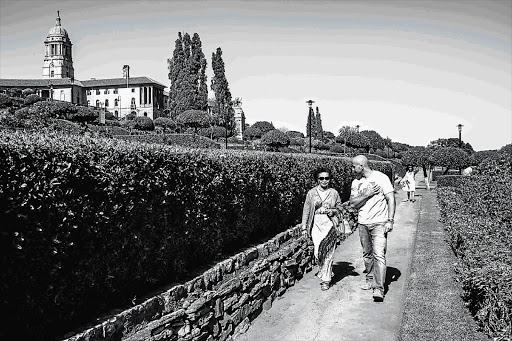 BRINGING BACK MEMORIES: Sophia Williams-De Bruyn with Adrian Steirn at the Union Buildings in Pretoria, the destination of a protest march on August 9 1956

FIFTY-seven years ago Sophia Williams-De Bruyn - along with Lillian Ngoyi, Helen Joseph, Rahima Moosa and other compatriots - led 20000 women in a march to Pretoria's Union Buildings.

The women were out to defy the apartheid pass laws that restricted the movement of black people.

"I would do it all over again if I had to," she said this week, "but differently."

Williams-De Bruyn said modern technology would have enabled her and fellow organisers of the march to mobilise a larger number than those who attended on August 9 1956.

At the time they relied on pamphlets and Joseph's car because she was the only person in the group with a vehicle. She reckons they could have brought as many as 80000 women to the march.

She said she was humbled to have been chosen as one of the 21 Icons, a project masterminded by photographer Adrian Steirn. "I hope it serves as an inspiration to others," she said this week ahead of being given the Freedom of the City award by Johannesburg.

The award was also given posthumously to Ngoyi, Joseph and Moosa.

The former deputy speaker in the Gauteng legislature said she had not set out to make history with the march - she just wanted to right a wrong.

"We did it with the purest of the heart ... with a sense of purpose," she said.

Steirn recently took her back to the Union Buildings for her portrait, which the Sunday Times publishes today.

In the portrait the 75-year-old is kneeling among rose bushes, holding a Bible - symbolic of the women's plan to kneel in prayer if officials attempted to break up the protest.

Steirn said he was looking for a portrait that showed the "absolute dignity and significance of that day. We were trying to show the strength - and dignity - in how those women behaved."

SABC3 will flight a three-minute film of the shooting of the portrait tonight at 6.57pm.

Proceeds from the auction of the original signed portrait will be donated to the Sophia de Bruyn and Henry Benny Nato de Bruyn Legacy Foundation, a not-for-profit philanthropic endeavour that assists communities from which Williams-De Bruyn and her late husband come.