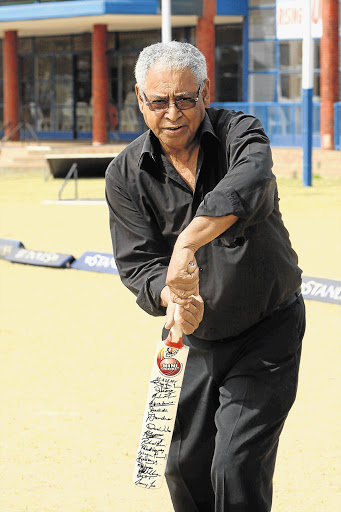 Cricket coach Hoosain Ayob was blown away when he received the Khaya Majola Lifetime Achievement Award at the Cricket South Africa banquet in the Sandton Convention Centre on Monday night.

Winning the award was a "very emotional moment" for Ayob, 71, because the late Majola was his good friend and cricket mate. Majola died in August 2000 at the age of 47. He was instrumental in transforming cricket in South Africa and taking the sport to the black townships.

"Khaya and I were good friends for more than 30 years. We played cricket together and against each other - people used to call us the 'terrible twins'. It is a great honour to receive such an important award," said Ayob.

He has been involved in cricket for more than 50 years. Although he may be semi-retired, he occasionally conducts coaching courses for the Gauteng Cricket Board and works for the International Cricket Council.

He also worked for Cricket South Africa for more than 30 years coaching coaches.

"Over the years I have coached Corrie van Zyl, Geoff Toyana, Mickey Arthur and Paul Adams, among many others. We have many talented coaches in South Africa and a number of them have been taken up by other countries. There are many challenges that cricketers and coaches face - the game changes all the time and they have to keep up to speed. Our cricket players are outstanding and on par with the best," he said.

Ayob became interested in cricket at the age of 10. He was a fast bowler and represented Transvaal in the College Cricket Club.