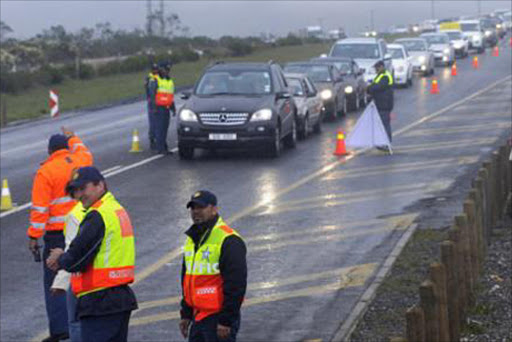 Police and traffic officers in South Africa's top tourist cities are making thousands of drunk-driving arrests that fail to result in convictions, amid claims that dockets are being tampered with for cash.

Internal documents obtained by Sunday Times reporters reveal that at Durban Central police station alone, 1481 arrests in 2012 led to only 111 convictions - a rate of 7.5%. This excludes thousands of dockets a year opened at other Durban police stations.

In Cape Town, 3022 drunk drivers were arrested in 2012 and 3089 in 2013, with fewer than 7% convicted, according to a senior official with access to provincial statistics.

Several senior officers interviewed in different parts of the country - some with direct knowledge of the cases - blamed corruption and chasing arrest quotas for dismal conviction rates. All spoke on condition of anonymity. One received death threats this week after Sunday Times reporters began to make enquiries.

They said police officers were not encouraged to build tight cases because convictions did not affect promotion prospects.

"At a typical roadblock, you employ up to 20 SA Police Service and metro police members for an eight-hour shift, getting paid overtime," said one official. "You need a booze bus, blood kits, a nurse to draw blood. Then you need two or three members to drive up to Pretoria every week to take these samples to the lab. It's a very costly, fruitless expense to the state. These members could be used to fight other crimes."

The official also said police officers were being paid to deliberately throw cases.

Another senior police officer said convictions were rare, either because the police botched the cases - intentionally or not - or the prosecutors withdrew charges. "They're also chasing targets and don't want these cases to clog up the courts. It's a scam."

A third official estimated that "80% and 90% of all drunken driving cases are thrown out of court or withdrawn because of botched blood samples or straightforward corruption".

"If one out of every 200 drunken driving cases gets a conviction, it's a lot," he said.

Another official agreed that the figures did not add up. "There's a huge discrepancy between the number of drunks caught and the number of convictions for drinking and driving," he said.

The Independent Police Investigative Directorate confirmed this week that Durban Central police station was in its sights.

"We are investigating a systemic corruption matter related to about 200 drunk-driving cases," said spokesman Moses Dlamini. "There are indeed cases where it is clear there is a problem."

Sunday Times reporters have seen a sample of 17 suspicious drunk-driving dockets at Durban Central from arrests in 2010, 2011 and 2012 in which charges were withdrawn - in all but one case by the same officer, a Captain NEP Ndlazi.

In six cases, Ndlazi closed the dockets several months before blood samples arrived from the laboratory.

The dockets are replete with other errors. In one case, the arresting officer failed to specify the time of the offence. In another, the time of taking a blood sample was "tampered with". Several dockets contain sworn statements showing that chain-of-evidence statements have gone missing or have not been signed - all grounds for throwing a case out.

In six cases, the forensic laboratory said the blood sample could not be analysed because it was "clotted", "dried in transit" or was "too small".

This was highly unlikely to happen without deliberate tampering, one official said. "What they do is put the sample in the microwave or leave it in the boot of the car on a hot day."

A government pathologist, who asked to remain anonymous because he was not authorised to speak to the media, confirmed blood samples taken at roadblocks "generally arrive in good condition" at laboratories.

Ndlazi refused to comment on specific allegations. "I will only discuss the allegations with the person investigating, who must come to me with all the evidence," she said.

Three cases involved minibus drivers transporting passengers. One was chased by a police vehicle after jumping a red light. He abandoned his taxi and fled on foot. When he was caught, he had bloodshot eyes and "smelt of liquor". Another minibus driver reeked of booze and had to be handcuffed after resisting arrest.

Several of the drivers told the Sunday Times they had no idea why the charges against them had been withdrawn. "They said they would contact me and nothing ever happened after that," said one. "It did feel a bit strange."

Another, who, according to his docket, was so intoxicated that he was "unable to blow into the breathalyser", confirmed the charges against him had been withdrawn, but declined to say why. "I got a lawyer," he said.