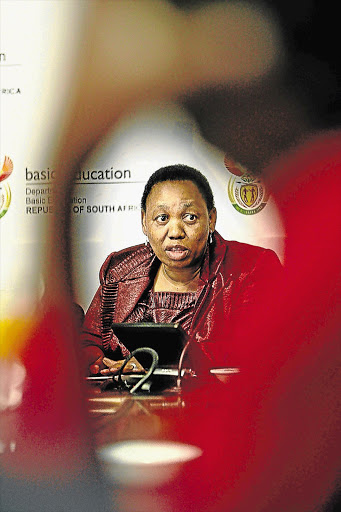 When Minister of Basic Education Angie Motshekga gets up tomorrow to mumble her way through the official report on the Grade 12 national senior certificate results, she will again announce an increase in the pass rate.

The bad news for the minister is that, as a result of much-improved education journalism in recent years, reports by independent research bodies and widely publicised exposés of broken schools by education rights groups, we now know these results are grossly misleading.

We know that the top 5% of Grade 6 pupils know more mathematics than the bottom 20% of the maths teachers in the same grade. We know that in a recent world report on science and mathematics achievement, South Africa was dead last, or just above Yemen, at the bottom end of international rankings.

We know that the most recent annual numeracy results would sink a minister of education under any other democratic government - in Grade 9 mathematics the national average is 14% and only 3% of pupils scored more than 50%.

Which raises the question: why the continuing fuss about the Grade 12 results?

One reason is that those results are important for the 707136 pupils who sat for those examinations.

Only about a quarter of those writing will qualify for degree studies at a university, and so this exam is a high-stakes game for those wanting to study further.

Meaningless as a simple pass might be, the "matric" certificate - as it used to be called - is still the cut-off point for basic jobs, whether that means flipping burgers at a fast-food joint or working as a cashier in a clothing shop.

And then there is for young people the psychological value of any pass and the terrible consequences for self-esteem and community regard if you fail.

For the government, the results are interpreted - wrongly, but conveniently - as a barometer of the state of the school system.

So why, according to the government, do these results show that the school system is doing better when all other data - such as the annual national assessments and international comparisons of science and mathematics achievement - reveal we have been stagnating, or doing worse?

The officials hope you are ignorant and that you will, like them, compartmentalise this data in isolation of reality; in other national contexts they would call my clumsy explanation "official lies".

The authorities will not tell you that these pass rates are still calculated at a base of 30% in some subjects and 40% in others.

They will neglect to tell you about the culling process that left behind about half a million students who started in Grade 1 and did not make it to Grade 12.

They will skip over the unpleasant fact that the number of children since 2009 doing mathematical literacy (simple maths) has grown in proportion to those doing what students themselves call the "real maths".

They will not, in the ministerial statement, reflect on a slip-up by the minister last year, when she confessed that keeping the passing standard low was done to benefit the self-esteem of poor pupils.

They will not advertise the fact that there is now a new rule that forbids a learner from failing more than once in the FET phase (grades 10-12); failing once means you will find yourself automatically promoted.

In other words, you will not be told that the mediocrity institutionalised in the primary grades has now been extended into the final years of schooling.

And the spin doctors will not tell you that if you removed the top 20% of schools - mainly former white, privileged schools - from the national averages, then a very dark picture emerges of a mainly black and poor school system performing far below what the combined results show.

In other words, after 20 years of democracy under a black government, we have failed black people when it comes to quality education.

Why do I write this critical review every year?

I do not enjoy it and it has career-limiting consequences. I do this for one reason: that if the few critical voices stop exposing this massive fraud in school education, then we will continue to be misled by officialdom, thereby placing our democracy at even greater risk.

So what is to be done? Just four steps can move the system in the right direction.

We should begin by raising the pass mark for all school subjects to 50%, the (still admittedly low) standard set for academic work in most contexts. Schools are self-regulating systems with the remarkable capacity to adjust to a new standard over time.

We should also place the emphasis of governmental and nongovernmental intervention on quality preschool education and in the first three grades of formal schooling.

Let us build the foundations of the school system so that more children stay in school and the basics of literacy and numeracy are firmly established for all pupils.

We cannot expect high schools to make up for the large gaps in mathematical knowledge, for example, accumulated from the foundation years.

We must establish strong managerial routines in all schools that are interrupted by the chronic destabilisation of teacher unions.

This requires political action led by the government - against union disruption - and managerial action imposed by education authorities that sets in place strong accountability systems for all schools.

Lastly, we should invest in a new model that mentors teachers in the classroom, with the goal of building their knowledge of subjects and their capacity to teach.

Out-of-school training for masses of teachers simply does not work. This requires a completely new class of professional teacher mentors, built around the most experienced teachers.

The deployment of comrades and union loyalists will sink such an intervention.

In other words, the long-term resolution of the schools crisis is only partly educational; it is, in the first place, political, and there is no evidence that we have the kind of government that is prepared to take on the powerful interests that benefit from the status quo.