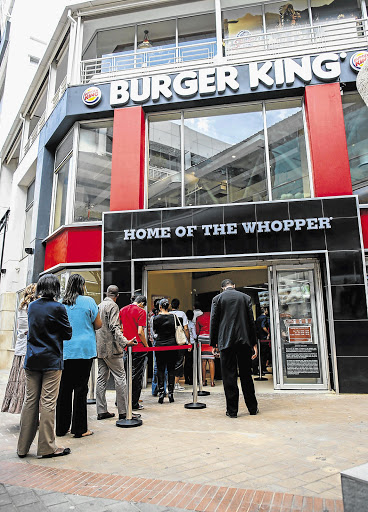 MOUTH WATERING: Burger King has already made its mark in Rosebank, Johannesburg. Since opening its store in the upmarket shopping precinct, there have been long queues of patrons hungering to sample its fare
Image: Simphiwe Nkwali

Grand Parade Investments (GPI), the tourism, leisure and gaming company that bought the franchise rights to operate Burger King in South Africa, last week reported a 36% rise in revenue over the past six months - growth that looks set to speed up if the queues outside the fast-food outlet are anything to go by.

Raking in R328.2-million for the six months to December, GPI headline earnings actually fell 5.5% compared to the same period last year as it forked over cash to set up the Burger King franchise.

The casino business is well entrenched, however.

But it is the Burger King roll-out that has gripped public attention.

Burger King now operates five stores in the Western Cape, where GPI is based, and its turnover since it started exceeded budget by 65%.

Despite doing a roaring trade at its fledgling outlets - some of which were trading before the decor had been completed - GPI said margins were under pressure until the company could source as many products as possible locally.

It aims to find local sources by June.

In December, GPI broke ground at five new Burger King stores in Gauteng, three of which opened at the beginning of February.

Two more will open this month.

The company plans to expand its Sasol garage tie-up, open drive-through outlets and one store in KwaZulu-Natal this year.

GPI executive chairman Hassen Adams said he was pleased with the diversity of the group's revenue, showing it could venture into new territory successfully. .