Coal giant's operations not a blast for locals 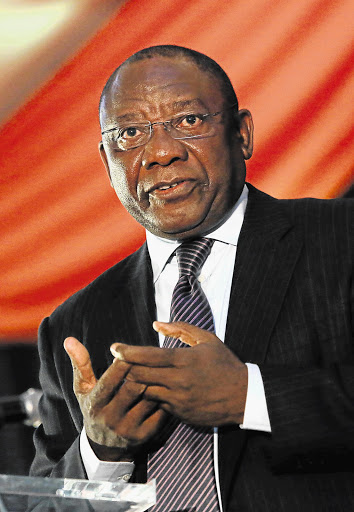 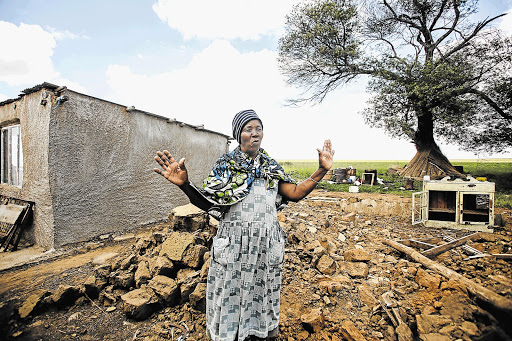 Glancore Xstrata, the largest mining company on the JSE and the world's biggest commodities trader, has come in for a roasting from some communities living near its operations.

Little is known about the company, South Africa's biggest coal exporter and the world's fourth-largest mining company after the mega merger of Glencore with Xstrata last year. Some pundits dubbed it "the biggest company you've never heard of".

But three communities near its collieries in Mpumalanga are claiming that the mining giant has trodden all over them in its endeavours to produce the 100million tons of coal that it sells each year.

Eleven families living on Kaalplaats farm, just outside Glencore Xstrata's Onverdacht coal mine, near Belfast, where the company has nine collieries, claim blasting nearby has created havoc.

"We have lived here since the 1960s," said Selina Sindane, surveying the ruins of her recently demolished house on Jan Burger's farm - a result, she claims, of mine blasting.

"We don't know what we're supposed to do or where we'll have to go," she said.

The house was demolished because it was unsafe, with cracked walls. The rest of Sindane's family now live in mud houses adjacent to her old home.

Sunlight streams through wide cracks in their walls. "This house is also collapsing because of the blasting at the coal mine," said her 30-year-old grandson, Alfred Motau.

"This is an important place for our community. We have a history here, but we're asking for relocation because we cannot live like this.

"There are about four mine blasts a month. Our mud houses are damaged, and the dust makes the air stink. We had to change our water tank because of this dust. There was a water analysis done by the company, but we haven't been told what the results were," Motau said.

This is at odds with Glencore's analysis of the problem. Glencore spokesman Charles Watenphul said that the company hired experts to assess the families' claims - and it was found that they were untrue.

"It was concluded that the blasting from our mine did not contribute to damage to the property concerned," he said.

"We have placed seven seismographs in and around the mining area. There is no evidence from the seismographs that indicates that any structural damage has occurred as a result of blasting activities."

Nonetheless, said Watenphul, Glencore offered to supply all materials needed to repair cracks in the houses.

"Since then we have not received any complaints."

But it is clear that this issue taps into a vein of resentment in communities living close to mines in South Africa, who are often not told what is happening or feel that mines are abusing them.

This is the untold story of many of the mines, despite the fact that all mining houses must submit community and social responsibility plans to the Department of Mineral Resources. But, with commodity prices subdued, and striking workers throwing a spanner in the works, many mines are either not bothering to honour these commitments or are falling short.

Publicly, Glencore Xstrata trumpets its commitment: it has pledged more than $100-million of investment in South Africa's coal industry, and talks about projects it is developing. But the communities are taking these pronouncements with a pinch of salt.

"The mine management has said that this community is too far from the mine for relocation," said Kleinbooi Mahlangu, head of the Belfast Community Association.

"When we complained about the blasting and asked for relocation, a representative of the company said: 'We're not here to give people housing.'"

Glencore responded that across the world it had a "positive impact on the communities in which we operate".

Watenphul said: "We make every effort to identify and address any concerns of local stakeholders by working with them, especially those most affected by our operations."

Glencore has relocated communities, such as that near its Wonderfontein colliery, but even then the communities remain unhappy.

This is not the first time that the ethics of Glencore have come under the microscope.

In 2008, it was castigated widely for "unacceptable" labour conditions at its Colombian coal mines.

Last year, Colombia's supreme court found that paramilitary units killed 18 farmers and displaced 48 families in 2002 so that the land could be sold to Glencore for coal mining.

At the time, Glencore denied owning the land or having a commercial interest in it - but several parts of the land were owned by its Colombian subsidiary, Prodeco.

In Zambia, Glencore was criticised for allegedly manipulating copper prices to evade tax, and in the Democratic Republic of Congo the company was accused of pollution, tax evasion and using child labour.

Glencore's Klippan Colliery has relocated five families and built 10 houses because of doubts about the structural integrity of the original homes. This hasn't pleased everyone, however.

"Before the relocation, the company told us we would have better housing, but now I have sleepless nights in this new house," said Braai Sibanyoni.

He said that whenever it rained water flowed into the house.

"Water also drains into the walls, and my furniture is starting to rot. Before the relocation, I used to have a brick house bigger than this one and without all of these problems."

Glencore said it had "for the last three years responded to all complaints" from Sibanyoni, and made "the necessary repairs".

It said that it gave Sibanyoni and Branaza Suahatsi 170ha of grazing land each to replace the 30ha they had previously.

Glencore said that its Umcebo mining company "meets the community on at least a weekly basis as part of our stakeholder engagement process - but no complaints were received of late".

"We didn't want to come here," said a woman who asked not to be named. "When we were told to move, we refused, so the company just started blasting next to our home. My mother said she didn't want to stay there any more, so we accepted the relocation. Now we're in houses that are smaller than the ones we had before."

Mahlangu said: "The company has done that several times. When people don't want to relocate, they start blasting close to their homes until they accept the relocation."

Asked if he considered that a forced removal, Mahlangu responded: "Of course."

"They've moved people onto a farm without obtaining a change-of-land-use authorisation," said Koos Pretorius, director of coal issues of the Federation for Sustainable Development of Belfast.

"What they did was a criminal offence, but they just pay a fine and go on. They don't want to admit they did anything unlawful.

"I don't know if Cyril Ramaphosa knows about all this, but what's being done in his name is horrendous."

Klippan colliery is managed by Shanduka Coal, a company founded by Ramaphosa, who is one of its owners. Ramaphosa is Glencore Xstrata's main black economic empowerment partner in the coal industry.

In 2012, it emerged that several mines managed by Shanduka Coal had been operating without water licences.

These precedents trouble the communities that neighbour the Wonderfontein coal mine, developed by Umsimbithi, which is partly owned by Glencore Xstrata.

At Wonderfontein, Glencore relocated 11 households - a process still under way and expected to be finished in July.

"They first told us we were going to get a house bigger than the one we have now, and that we would have a better life," said Samuel Kambule.

"Then they told us the house was going to be the same size as the one we have now."

"We were told we would have employment, but no one here has been employed.

"We were told there would be no blasting before we were relocated, but the blasting has already started."

Glencore's Watenphul admitted that blasting had started at Wonderfontein, but said the mine "has taken measures to ensure safety" of the communities, and all the people live more than 500m from the blasting.

"The quality of the houses being built is significantly better than their current structures," he said.

"To date, we have not received any complaints or referrals related to the relocation."

This does not placate Glencore's critics, however.

"The company didn't honour past agreements, but they will talk," said Pretorius.

"As long as they can keep on mining, they will talk, because once they get the mine operational they'll say it's too expensive to halt operations.

"The Wonderfontein project is operating without a water licence because we appealed [against] the licence that was granted and there hasn't been a decision by the court of appeals.

"The ANC Women's League is one of the stakeholders in the Wonderfontein project," said Mahlangu. "They've said it is to empower women."

This investigation was undertaken with support from the Taco Kuiper Grant, awarded by the Wits School of Journalism

Analysts are still keen on Glencore

Though Glencore Xstrata may battle to placate communities around its Mpumalanga collieries, investment analysts still swoon over the company.

It's worth R833-billion on the JSE thanks to its secondary listing last year. Analysts rate it as one of the hotter prospects on the local bourse ahead of its financial results next week. Most analysts rate it a buy, expecting its share price of around R58 to climb above R65 over the next year.

In a research report this week, Credit Suisse also rated it as a buy on the London Stock Exchange, expecting an upside of nearly 20% on its current price.

"[This year] will be the year for Glencore to deliver targeted cost-savings, improve the balance sheet and prove the returns- focused approach. Successful execution will allow the company to increase cash returns and capitalise on growth opportunities further down the line," it said.

This adds to the hype after brokerage Merrill Lynch last month rated the shares as a buy on the expectation that the sale of assets would boost the share price.

Glencore will release results for 2013 this week, and is expected to show a notable increase in pretax profit. An update last month revealed that it had a 26% rise in copper production last year, with the African businesses increasing production 43%.

Since listing on the JSE last year, Glencore hasn't exactly shot out the lights as the share price climbed only 9.6%

Still, many local investors don't know much about the company's intriguing past.

Glencore was created in 1994 after notorious oil trader Mark Rich sold his shares in his company to management, which then renamed it. Rich, who died in June, was indicted in the US in 1983 for 65 criminal offences. He was later pardoned by the then president Bill Clinton.