Food critic with the candour of youth 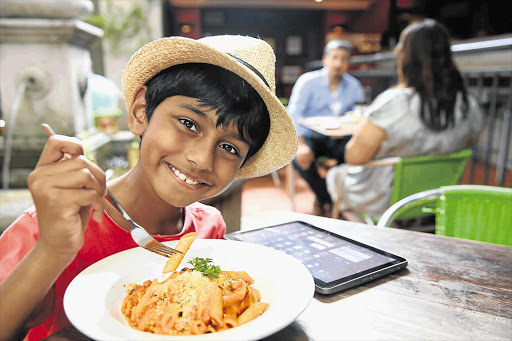 PASTA PERFECT: Dhiyarv Govender has strong opinions on the food he enjoys - and he shares them on Facebook's Yummy or Yucky page
Image: JACKIE CLAUSEN

Durban restaurants had better up their game and buff their silverware. There is a new food critic in town and he pulls no punches.

With the simple candour of an eight-year-old, Clifton Preparatory School Grade 3 pupil Dhiyarv Govender writes for the growing Facebook foodie page: Yummy or Yucky at the Kids Table Through the Eyes of a Kid.

Siphiliselwe Makhanya  spoke to the youngster, whose culinary musings have so far notched up more than 330 likes and reached more than 10000 views from fans as far afield as India, New Zealand, the UK and US.

If you could eat only one food for the rest of your life, what would it be?

The pasta from Olive & Oil. It's creamy, it's tasty, it has chicken in it and it makes my tummy go yum-yum.

Snails. It was at a restaurant in Florida Road. The first one I didn't like, but when I tried it again I liked it. It did not taste nice at first but then it tasted amazing. I had it with hot sauce.

Is there anything you would never eat? If so, why not?

Sheep's head, because of the brains.

Is there any food that you always thought you wouldn't like but tried and found yourself liking?

Sushi. I thought it would be disgusting and slimy in my mouth and that it would tickle my throat when it went down. But I loved it. It was California rolls and salmon roses.

Have you eaten in restaurants in other countries besides South Africa? What was it like?

In Mauritius, I tried chicken and a sauce and chips. I did like the chicken but it was too small - the size of my hand. While in Mauritius, my mom and dad renewed their vows. They gave us supper and we had prawns and crayfish and a lot of sea stuff.

You gave a poor review to a meal you had at KFC in Overport, Durban. Is that one of the worst meals you've had at a restaurant?

I did not like it, not one little bit, because the chicken was hard and it tasted stale.

What would you tell someone to do if they wanted to make their restaurant more attractive to children?

I would tell them to have games like PlayStation, or any type of game. When I go into a restaurant I see if the chairs are spaced out, if there's enough air - like if there's enough of a breeze. Also if the waiter's friendly.

What are your top three favourite restaurants?

Ocean Basket: The family combo. It has fish, crayfish, calamari and mussels.

Olive & Oil: I like the creamy chicken pasta there.

No. But I can make toast. One thing I do is help mom to bake. We make red velvet cupcakes. Mom is the best cook in the world.

I read on your page that your gran makes the best fish. Is she also one of your favourite cooks?

Yes, she makes the best fish and the best crab curry. One of my favourite foods is also crab curry.

Are there any other people who cook whom you admire?

Benny (Masekwameng) from MasterChef . I'm hoping I can get an interview with him. My mom said we're going to try to do it after I get 1000 likes. He's a great judge . I always agree with what he says about the food. It was just once that I did not agree - when a lady made a red velvet cupcake.

Child foodie Dhiryav Govender is as happy bonding with his mother, Subashni, by baking red velvet cupcakes as he is writing and posting his reviews under her guidance. The team shared the recipe for what he calls "the best red velvet cupcakes ever".

Cream the butter and sugar until light and fluffy, add the egg and beat until well mixed

Repeat this process with the remaining buttermilk and flour until smooth

Place on a cooling rack to cool completely.

Decorate the cupcakes with the cream cheese icing (recipe below) as desired and sprinkle a little red coloured granulated sugar on top.

Whip the butter and cream cheese on high for five minutes

Increase the speed and whip on medium high for a few minutes until the mixture is light and fluffy.