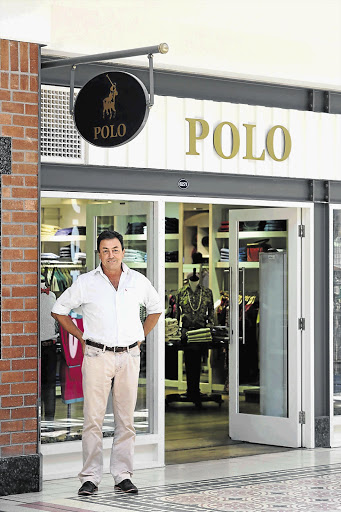 SURPRISED: Rob Laurie outside the Polo store at the V&A Waterfront, Cape Town

Wearing a pair of Gucci sunglasses, donning a Guess T-shirt, clutching a Louis Vuitton bag, all topped off with a spray of Chanel No 5 epitomises an elitist way of life that millions aspire to.

But there is more to it than the prestige. Whether justified or not, there is a perception of quality associated with top global brands, some of which have been around for more than 100 years.

So when the price tag for a single item is more than some people spend on food a week, customers must feel it is well worth forking money out for.

But what happens when the iconic brand you are buying is not actually what you think it is? Like finding out that Polo in South Africa has no link to the multi-billion-dollar Polo Ralph Lauren brand in the US.

Like the Cape Town businessman who first alerted me, my colleagues were peeved when I broke the news to them. They had all either bought Polo products - or wanted to - and had assumed that the items sold locally were part of Ralph Lauren's classic international range.

It is an easy mistake to make. The two brands share a name and a similar range of premium goods. But, more significantly, they use an almost identical motif: a polo player on a horse.

It turns out that Polo South Africa - which was founded in 1976 - owns the local trademark rights to the word "Polo" and the horse motif.

Ralph Lauren, who launched the famous Polo brand in 1967 and boasts stores in the world's major cities, is barred from selling any of its own Polo goods, except perfume, in this country.

Does this blurred distinction not have the potential, at best, to confuse consumers or, at worst, mislead them?

Cape Town businessman Rob Laurie learned that Polo South Africa was not linked to the US brand only last year when taking a visiting French businessman to a local Polo store.

The associate "lost his luggage and I had to take him to buy some Polo clothing, which is virtually all he wears", said Laurie.

When the visitor told Laurie the Polo garments in South Africa were "not genuine [not Polo Ralph Lauren]" , Laurie dismissed him as being "a typical French snob" and didn't give it another thought. But when two business associates later backed up the Frenchman's claims, he contacted Polo South Africa, which confirmed the two brands were unrelated.

"Of concern to me is the price of the products, which are pitched at international levels, but the consumer is not aware of the situation," said Laurie. "This should be brought to the attention of consumers, who can then make their own choice as to whether they want to buy the product."

Polo South Africa sells its classic golf shirt in its stand-alone stores for R700. A long-sleeve men's shirt at its Rosebank, Johannesburg, shop was selling for R899 this week, a pair of men's leather shoes for R1790, and women's jeans ranged from R499 to R899. All the labels say "Made in China".

I asked the LA Group, which owns Polo South Africa, why it would choose to produce a brand so similar to the US version? If the name and motif were not "borrowed" from Polo Ralph Lauren, was it just an incredible coincidence?

I got nowhere with group legal adviser Rae James, who refused to answer such questions either by e-mail or on the telephone, saying they had "no relevance". Instead, she reiterated her e-mailed statement that Polo South Africa has a "use agreement" with Ralph Lauren that entitles the company to use the Polo trademark in Africa and prevents Ralph Lauren from trading in the same territories.

"To differentiate the product, it was agreed that the polo pony would face differently," the statement read. The trademarks were registered and owned by the company throughout Africa, she said, and had been used for more than 35 years.

"There's nothing more to it," said James when I asked for more details. When I suggested there was, asking whether she did not think Polo South Africa was misleading consumers, she said the company was unaware of any market confusion.

A simple query on where the local garments were made went unanswered.

While ducking my questions, which she described as "aggressive", James warned that if I published anything untrue there would be "repercussions".

The threat was repeated in an e-mail from an attorney representing the company, who described certain words used by me and Laurie as defamatory.

Ralph Lauren, which is rumoured to be interested in opening stores in this country, declined to comment.

Polo South Africa sells its products through at least six stand-alone stores as well as in selected Stuttafords, Edgars and John Craig branches countrywide. On the Edgars website, the local Polo logo is listed under "international" brands, alongside the likes of Levi's, Billabong and Jeep.

Then there is the Branded website. The independent retailer of premier brands in Gauteng dedicates a page to the Polo South Africa brand with a link that takes users to Ralph Lauren's website.

Update: The headline on this story was changed to reflect Polo South Africa is not fake but there is no link to the multi-billion-dollar Polo Ralph Lauren brand in the US.