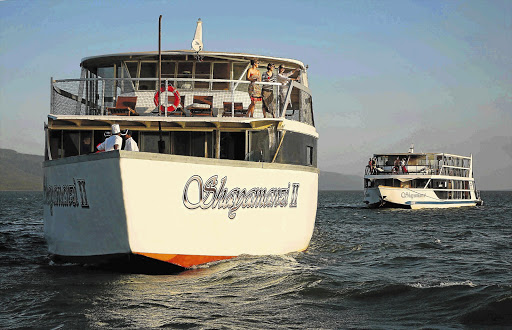 ROCK AND ROLL: Shayamanzi II has 10 air-conditioned en-suite cabins, its own staff and a jacuzzi
Image: Shelley Seid

Shelley Seid spends a hot weekend on the water

Jozini Dam is best known as a prime tiger-fishing destination. Situated in northern KwaZulu-Natal, it's the fifth biggest dam in South Africa (at around 16000ha). It's arguably one of the most pristine and is quite beautiful, surrounded as it is by protected game reserves, both public and private.

This is where we were to spend a relaxing weekend on a houseboat, the Shayamanzi II, which boasts 10 air-conditioned en-suite cabins, a gaggle of staff and a jacuzzi.

I was in two minds: on the one hand I was looking forward to doing as little as possible; on the other, I had no interest in dragging a fish from the water, taking a photo and then throwing it back so it could spend the rest of its days suffering from post-traumatic stress disorder.

We were all to meet up at the Three Cities Jozini Tiger Lodge, the mooring point of the houseboats. I got there at lunchtime, opened the car door and was greeted by a heat to rival Dante's ninth level of hell, apparently the norm for northern KZN in March.

The boat itself was no cooler (the air-conditioning only works at night off a power point near the mooring) and the most attractive venue was, of course, the still, blue water of the dam. Sadly, it's as attractive to hippos and crocodiles so I had to settle for a cold drink and the murky jacuzzi.

This is where I spent much of the weekend, reading, chatting and occasionally looking up to watch a couple of posing zebra, a group of skittish kudu and the occasional grumpy buffalo. It's not unusual to see elephants gathering to drink or wallow in the water but we were not at the right place at the right time. I did see - and it's an increasingly rare sighting these days - a herd of rhino from my vantage point in the jacuzzi. They looked as lethargic as we did.

Dinner brought little relief from the heat but a great deal of lively interaction, debate and hilarity - there's something about being a group of (mostly) strangers forced together around a communal table with plenty of alcohol that lends itself to instant bonding. Having interesting lives also helps.

Our group included a doyenne of the media and travel world, who got her PADI diving qualification at the age of 75 and, at almost 80, went parasailing for the first time; a 60-year-old passionate about deep house and trance music - last year he and 180000 others attended Tomorrowland in Belgium, the hippest, coolest dance festival in Europe; a married couple with a handful of independent, successful magazines to their name; and a motoring journalist who, at the drop of a hat, would show you as many photos as you could bear of his beloved red motorbike.

Of course, a crowd this adventurous couldn't wait to hop into one of the two small motorboats and do a bit of fishing as the sun rose the following morning.

I preferred to sleep in and, thereafter, transfer to my jacuzzi. Both boats returned at around 9am; no one had caught a thing - aside from the music man, who had managed to hook an extremely agitated hippo - but the sights and sounds of the animals on the banks and the abundance of bird life had everyone upbeat and ready for the afternoon excursion.

By Sunday morning, a third outing down and not a fish in sight, we docked back at the Tiger Lodge, in high spirits, filled with mutual fondness, utterly relaxed and still very, very hot.

Where it is  In northern KwaZulu-Natal just before Pongola, almost on the border of Swaziland.

What's on offer: Fishing, game viewing and spotting some of the 350 species of bush birds, water birds, and raptors. A full wet bar is on offer, as is DStv and a DVD home-theatre system.

Cost: Boarding is from 2pm on a Friday and disembarkation at 10am on Sunday. Rates from R2055 per person per night, minimum of two nights. Includes meals, all-day tea, coffee and munchies and use of the motorboats as well as fishing rods. Drinks are extra.

Food: Plenty of it, but a hit-and-miss affair. The Saturday-night braai was a highlight, as were the plentiful teatime goodies.

How to get there: From Durban: on the N2, 10km past Mkuze, turn right at the Jozini sign. Continue for 19km over the Lebombo Mountain Pass. Enter Jozini, with the SAPS on the right, turn left onto a gravel road. 100m down this road is Jozini Tiger Lodge. From Joburg: Take the N4 or N12 towards eMalahleni (Witbank) and Middelburg. Follow the signs to the N11 heading to Hendrina and Ermelo. Follow signs to the N2 to Piet Retief and Pongola. Continue on the N2 towards Mkhuze, following the signs to Jozini. 10km before Mkhuze, turn left at the Jozini sign and continue for 19km over the Lebombo Mountain Pass. Follow directions as from Durban.