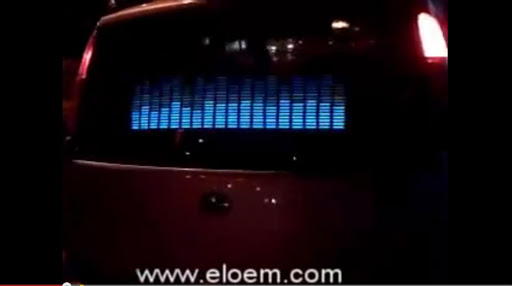 If you own a vehicle that’s well past its prime (or, indeed, one that’s simply a little too low-tech for your liking), you may be tempted to spruce it up with a spot of aftermarket gadgetry.

And although there are some useful and even ingenious automotive-flavoured additions out there, they are unfortunately about as common as an honest second-hand car salesman.

But if you simply can’t shake the hankering, then our advice is to at least tread carefully. Very carefully. Why? Well, the auto accessories market is flooded with poor quality and often downright distasteful products.

So not only will you have to drive around with a lousy product hooked up to your car, you’ll also likely look rather silly doing it. Well, according to us, anyway…

In an attempt to save you from becoming the object of ridicule next time you hit the local drive-through, we’ve put together a list of aftermarket car gadgets that you simply shouldn’t be caught dead buying. Don’t say we didn’t warn you.

Don’t you wish your car came standard with a sound-activated graphic equaliser plastered to the rear screen? Nope, us neither. But apparently there’s a market for such a thing. Just in case the whole neighbourhood can’t hear that you have poor taste in music doesn’t mean that they shouldn’t see it, apparently. And who needs to see out of the rear window, anyway?

How does it work? A large sticker houses a bunch of colourful LEDs, each of which is connected to an adaptor via a ribbon cable. The adaptor, in turn, is attached to a cable that culminates in a plug that slots into your car’s 12V socket. The sticker, of course, is then applied to the rear screen, and the lights flash along with the music. We think we just threw up a little.

Are you a compulsive liar? Do you want onlookers to gasp in appreciation as your vehicle releases that characteristic blow-off valve sound, despite the very important fact that your car isn’t turbocharged (and therefore doesn’t require a pressure release system)? Well you’re in luck!

The typical “dump valve simulator” kit includes a high output speaker (finished in, you guessed it, faux carbon-fibre) which is mounted somewhere behind the front bumper. This speaker unit is connected via a cable to a micro-switch, which is activated by movement on the accelerator pedal. Come off the loud pedal to change gear and that distinctive turbo hissing sound will fill the air – at somewhere in the region of 125dB. Yes, people pay actual money for this sort of thing.

Gizmos such as the Fuel Doctor FD-47 claim to increase power and reduce emissions – thereby improving fuel economy by some 25 percent – on vehicles that are more than a couple of years old. And all you need to do is plug the LED-adorned gadget into your car’s 12V socket.

Sounds too good to be true, right? It is. The makers of these deceptive devices say that the ECU in a typical car begins to experience and generate increased levels of electrical noise and interference as the vehicle ages. The efficiency booster then “draws that interference and filters it, sending back a more stable current”. We call bull. And so do many, many independent testers.

Okay, we admit it. You caught us. The Drivemocion nearly didn’t make the list, because part of us secretly (well, not anymore) wants to be able to send mostly nasty messages to other motorists. But sanity prevailed and we came to the conclusion that such a device is more corny that cool.

So, what is it? Basically, the Drivemocion is a remote-controlled LED display that attaches to the inside of your vehicle’s rear screen, facing those poor souls stuck behind you. Using pre-programmed buttons on the handy remote, you can thank other drivers, apologise, advise them to back off, flash them a smiley face, or even give them the digital bird. It’s that last one that has us in two minds…

We like pizza. We love cars. We adore gadgets. But we still wouldn’t spend money on a portable pizza-maker designed for use on the road. And you shouldn’t either. Not even ironically. Why? Well, this line from one of the many eBay adverts out there sums it up rather succinctly: “Perfect if you live in your car!”.

The RoadPro plugs into the car’s 12V power socket and can apparently be used with any oven-safe cookware – provided you can find small-enough examples. Not a pizza fan? Well, there are a whole herd of 12V appliances out there, including slow-cookers, popcorn-makers, coffee-makers, fridges, and even TVs. But don’t. Just don’t.

If your car resembles a Christmas tree – think LED washer jets, LED wheel valve caps or any of the countless other LED-based aftermarket nasties – you don’t look cool. In fact, you’re probably infuriating other motorists who are forced to shield their eyes as you come rolling by, doling out severe cases of solar retinopathy like candy.

The same applies to aftermarket daytime running lights. If your vehicle came standard with DRLs, fine – automakers are forced to conform to all sorts of regulations regarding lighting, after all. But while adding a couple of cheap-and-nasty flexible LED strips to your car’s front bumper will make you stand out, it won’t be in a good way. Or likely a legal one.

If you own one of these, it’s too late for you. There’s no turning back. Tell your loved ones you’re sorry and get out. You’re banished. Your vehicle simply doesn’t need a driver’s seat tray – particularly one that attaches to the steering wheel. The scariest thing of all? People have been known to use these evil inventions while driving.

So, what’s the appeal? Well, apparently certain individuals need their cars to double as offices or dining rooms, and the steering wheel tray is the right size for the typical laptop or Big Mac Meal. There’s even a spoof Amazon review about the tray’s usefulness when changing a baby’s nappy. Well, we hope it’s a spoof…