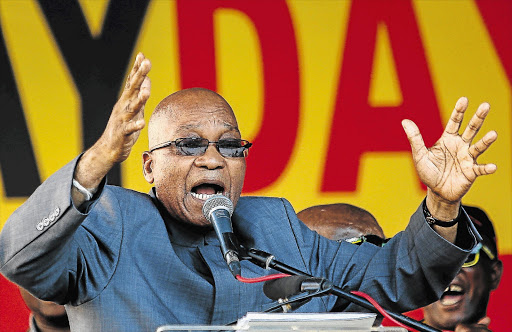 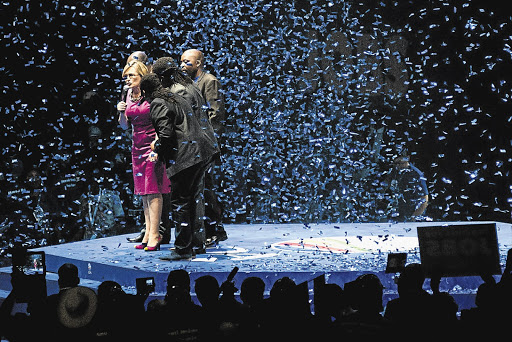 President Jacob Zuma is set to secure his second term in office with a landslide victory - but not the two-thirds majority he has asked for in Wednesday's elections.

According to an exclusive Sunday Times poll conducted two weeks ago, the ANC will get 63.9% of the vote, down from the 65.9% the party won in the 2009 general election.

The survey, conducted by Ipsos on behalf of the newspaper, shows that support for the party has continued to decline from the 66.1% the ANC registered when a similar survey was conducted on March 11.

The figures are based on a voter turnout of 74.5%.

The results of this third survey, which comprised 500 call-back telephone interviews on April 23 with a representative sample of registered voters from the first two surveys, suggest that, barring something extraordinary, the following outcomes are likely come election day:

The ANC will finish the election in the low 60% range, losing some support from 2009 and failing to secure the two-thirds majority Zuma said his government needed to "bring about a radical change";

The DA will grow the most of all political parties in this election, finishing below 25% but up significantly from the 16.7% it achieved in 2009;

There is a strong possibility that the DA will end up with a bigger percentage of all black support than the EFF. The Ipsos survey puts its support among black voters at 10%;

The EFF will finish third, at about the 5% mark, but slightly less than the 7.4% the Congress of the People (COPE) achieved in 2009;

The other newcomer, Agang SA, will struggle to breach the 1% barrier; and

COPE will lose significant support in this election and, despite growing in the third survey (up to 3.4%), is likely to lose more than half the support it garnered in 2009.

The survey also shows that public protector Thuli Madonsela's report on Zuma's Nkandla homestead had only a negligible effect on ANC support.

Professor Amanda Gouws from the University of Stellenbosch said "the impact of Nkandla is negligible because it seems to only matter to middle-class voters" and that "the survey confirms what analysts have been saying for the last few weeks - that the ANC's support will come down, but not below 60%".

Zuma said in East London on Friday that he still expected a two-thirds majority victory.

"I have been in every province and the experiences have been absolutely wonderful. The love for the ANC is amazing ... in fact, it is increasing with time," he said, adding that the party "is winning by an overwhelming majority, the kind of majority to move South Africa forward".

Zuma will be hoping to demonstrate his party's electoral strength when the ANC holds its final Siyanqoba rally at the 94000-seat FNB stadium this morning in Soweto. The party said it expected a further 200000 party faithful to witness the rally at different public venues across South Africa through a television link.

Speaking at the DA's final election rally in Randburg yesterday, party leader Helen Zille steered clear of predicting the outcome, but she called for "a bluenami" to sweep the ANC from power on Wednesday. "You hire with your vote and you fire with your vote," she said.

The survey suggests that her party will not reach the 30% mark she had initially predicted.

Using a scenario with a 74.5% voter turnout - the turnout in 2009 was 77% - the results of the third survey translate roughly as follows in absolute votes:

Political analyst Ebrahim Fakir said voter turnout would be a big factor in this election.

"Some nine million people decided not to register, which suggests a malaise, particularly among ANC voters.

"If there is a high turnout in favour of the opposition, then the DA, for example, might be able to achieve 22% or 23%, but if turnout is not disproportionately in their favour, they will struggle and probably end up closer to 20%. But they seem well geared to bring their voters."

Fakir said that if there was a low turnout of ANC voters, "it could well dip into the low 60% range".

The main constraint for the EFF, he said, was that "young voters were generally apathetic when it came to registering and this might translate into fewer EFF voters".

Outside of the ANC, DA and EFF, the third survey had support for the remaining parties at: COPE 3.4%; National Freedom Party 1.3%; Pan Africanist Congress 1%; Inkatha Freedom Party 0.8%; Freedom Front Plus 0.3%; Agang SA 0.3%; and the African Christian Democratic Party 0.3%.

These predictions all fall within the margin of error for the survey, which was between 2.6% and 5.9%, and are thus less reliable than those for the bigger parties.

The last two weeks of the campaign are crucial for political parties because it is during this period that undecided voters make up their minds.

The Ipsos survey allocated undecided voters to parties based on their responses to other questions, such as the favourability rating for particular leaders and how much they trusted those parties.

A disproportionate number of undecided voters were allocated to the ANC and DA, driving down support for the EFF.

Thus, on the third survey percentages, the ANC would be headed for 255 seats, the DA for 95 and the EFF for 19. - Additional reporting by Sibusiso Ngalwa and Jan-Jan Joubert