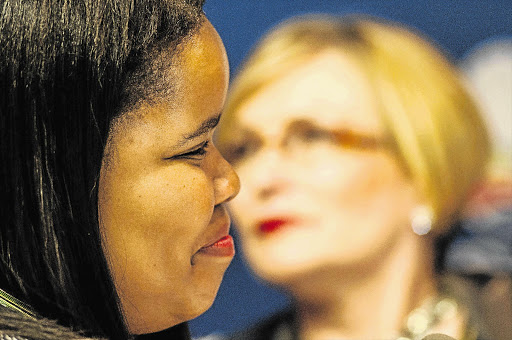 Lindiwe Mazibuko has quit her job as the DA's parliamentary leader - a move expected to send shock waves through her party and South African political circles.

Mazibuko, who became parliamentary leader three years ago, made the stunning announcement to the Sunday Times before she had informed party leader Helen Zille.

She was due to break the news of her decision to leave to study at Harvard University in the US to Zille yesterday evening. At the time of going to press, Mazibuko had not informed Zille.

Mazibuko's move comes after her public falling-out with Zille in November last year over the DA parliamentary caucus's handling of employment equity legislation.

The disagreement led to speculation in the party that Mazibuko would be challenged by Zille's new favourite, DA national spokesman Mmusi Maimane, when fresh elections were held for the position of parliamentary leader soon.

But Mazibuko insisted that her decision had nothing to do with her differences with Zille.

"I took the decision in September when, during a visit to Yale University with others pursuing high-profile careers, the value of such a break became clear to me. I had considered it before, and I believe the decision is the right thing at the right time for the DA and for me because it will improve what I can offer the DA politically," said Mazibuko, who is expected to be away for a year.

Regarding her relationship with Zille, Mazibuko said it was always characterised by robust debate and had not been strained by their much publicised differences on employment equity policies last year.

"Helen and I have breakfast every Tuesday at a Cape Town bakery and we discuss political issues. We have a relaxed relationship.

"Of course, sometimes we agree and sometimes we differ. It is the only way one grows. Sometimes we argue, but I know she is my leader, so she leads. And she engages with people's opinions. Often, she is swayed.

"And, in some instances, for instance in the federal executive or the caucus, she is bound by the majority decision."

Mazibuko was scheduled to inform Zille of her decision shortly before a DA elections staff bash last night to celebrate the party's winning 22.23% of the votes in Wednesday's general elections.

According to the full results announced by the Independent Electoral Commission last night, DA support grew from 2.94 million votes in 2009 to just more than four million votes.

The party consolidated its position as the official opposition, gaining more seats in the National Assembly, and also increased its majority in the Western Cape legislature to 59.38%.

The results show that the DA has made serious inroads in black areas - which are considered necessary if it is to challenge for national government in future - with 20% of its votes this year coming from black voters.

Much of that growth is attributed to the election of the likes of Mazibuko to leading posts in the DA.

Mazibuko said that after she took the decision last year, she immediately applied to Harvard and finalised the acceptance of a fellowship from the university, often cited as the best in the world, about two weeks ago.

She said she remained a committed DA supporter and planned to resume her political career after her studies, if given the opportunity.

"My decision is driven by the need to serve the DA and South Africa better. I will be exposed to the best ideas in the world, to a global narrative, including on how to do employment equity right, perhaps informed by the Alaskan model, for instance," she said.

Asked whether her decision would damage the DA, sending a message that young, black or female leaders could not succeed, Mazibuko said she was aware that political opponents would attempt to score such political points.

"It made the decision very difficult. I agonised because the DA, which means everything to me, might be hurt in the process. But I decided that, in the long run, it is better to come back with improved skills than to dig in my heels because I am the incumbent.

"Anyway, I have never campaigned on my demographics. I have only ever run on my skills and track record. I will never seek or accept a position in which my demographics outweigh my competence.

"Of course I add diversity, but I am not defined by my race, age, language or gender. No one should be defined by their demographics.

"I will be back stronger, better and more experienced. I will not expect any favours from the DA upon my return. I will work my way up from the bottom, knowing that my ability to make a contribution would have been greatly improved, if the DA should want me."

Mazibuko's departure could pave the way for Maimane, whose failure to wrestle the Gauteng premiership from the ANC means that he is now likely to take up a position as an MP in Cape Town.

High-level DA leadership meetings were under way in Cape Town yesterday afternoon about whether Maimane should be deployed in Gauteng or parliament. Maimane was part of those discussions.

He is the party's leader in the Johannesburg metro, where the ANC fell to only 53% of the vote in this week's elections. Some believe he should remain caucus leader and lead an assault on the ANC majority in the 2016 local government poll.

From Sunday Times inquiries, it was unclear whether Mazibuko or Maimane had the most support in the new parliamentary caucus, although Zille's backing of Maimane would have strengthened his chances.

Mazibuko had very strong support in Limpopo, the Northern Cape, Mpumalanga and the Western Cape, where she was publicly endorsed by the powerful provincial leadership, regardless of Zille's preference.

Maimane's main areas of support were expected to be the Eastern Cape and Free State, with him holding the upper hand in his divided home province of Gauteng.

"It played no role in my decision because my decision clearly preceded the speculation of a contest. Anyway, I rate Mmusi very highly. It was I who proposed he be appointed national spokesperson. Helen had someone else in mind, but I thought he was better suited because he is telegenic, articulate, smart and based in our growth area, Gauteng.

"The highlight of my parliamentary leadership has been the support of a caucus that was older and whiter than I, and to be the symbol of how the DA represents changing attitudes towards women in our society.

"The low point was being sexually harassed and insulted by the ANC in parliament. I know it was not about me - it was about an ANC, which had run out of arguments - but I am a human being."