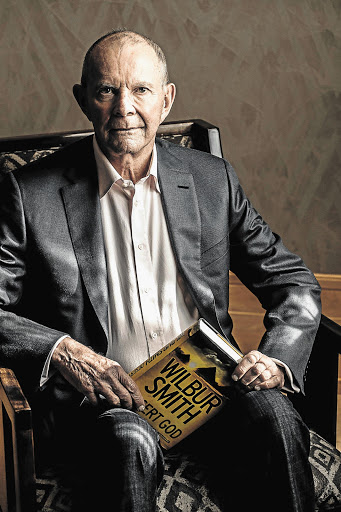 Wilbur Smith's epic un-PC tales of derring-do have made him one of the world's richest authors. For the past 50 Years his own life has been a thrilling ride, so much so that he sometimes sounds like one of his heroes, writes Jake Kerridge

Wilbur Smith is a fine example of that rarest of species in the 21st century, the Byronic author-as-action-man.

Now an octogenarian with what he refers to as a "bionic foot", he has given up his beloved big-game hunting, but still indulges his passion for fishing: the day before we meet he has spent 40 minutes battling with a blue trout in the Trent, and, as the pictures on his Facebook page show, come off victorious.

I have a feeling that when it comes to one-on-one tussles, he prefers animals to journalists; but the occasion of his 50th anniversary as a published novelist needs to be marked, and besides, even an action man needs to sit down sometimes.

One-on-one isn't quite the right term. To adapt the words of Diana, Princess of Wales, there are three of us in this interview.

Smith arrives at Mosimann's, the fancy members' dining club in London, with his wife, Niso, who sits at a table a few yards from ours, poised to provide facts and figures and correct her husband on various points.

And why not? How many interviewees, ruminating after the fact on what they did or didn't say, haven't wished they could have relied on a spousal nudge in the right direction?

"My life is as good now as it's ever been, if not very much better since I met Niso," he says, and so it should be, as his Tajik-born wife is 39 years younger than he is, and startlingly pretty. They met 14 years ago, when he stalked and bagged her in WH Smith's, catching sight of her browsing the John Grishams and directing her to the shelf groaning under his own novels.

Age and increasing baldness, combined with a constant chuckle, give Smith a cherubic appearance these days, which seems to soften the effect of his mildly politically incorrect opinions. His accent is thick (he was born in what was then Northern Rhodesia in 1933 and spends much of his time in South Africa) but his voice is soft. He limps heavily, a legacy of polio contracted as a teenager, but seems otherwise young for his years.

He has an appropriate level of modesty for a man whose books have sold more than 120 million copies - that is, minimal. If you didn't know that the first track he chose on Desert Island Discs was My Way, you would guess after five minutes talking to him. He is not slow to trumpet the merits of his back catalogue, which he tells me he rereads with enormous pleasure.

He doesn't find any room for improvement? Even in the early novels? "I think Taita is like me," he replies, referring to the hero of his latest novel. "He doesn't admit failure." He guffaws. "Even if he has failed."

The mention of Taita, the Ancient Egyptian demigod, eunuch and fixer-to-pharaohs who has appeared in several of his books, suggests that Smith may be hamming up the peacockery. Taita's vanity is played for laughs; in a typically salty exchange in the new novel, Desert God, one character tells him: "Even the smell of your farts is conceited."

Keen to stress his prowess in every-thing from military tactics to poetry, Taita shares with his creator a mastery of the humble brag. (Smith tells me uncharacteristically about being beaten in a fishing contest, only to reveal the winner was "my good friend Lee Marvin".)

The idea tickles Smith. "I enjoy sex. I enjoy writing about it and I enjoy thinking about it."

Niso chimes in with a reminder that they recently spoke to a nine-year-old girl at a signing in Italy who told them that "if her mother knew she was reading Wilbur's books she would actually kill her".

Smith hopes his books can bring young readers the same depth of joy (albeit of a rather different kind) that reading Biggles brought him when he sought to escape the miseries of boarding school. He read voraciously when he was at home too, although not in sight of his father.

"Dad didn't like book reading, he'd say it was fantasy. So I had books hidden. One was in the rolls of paper in the outhouse. And one of my jobs when I was on holiday, come back home from boarding school, was to keep the house supplied with firewood. And I had a gang of five Africans with me and we'd go out in the bush, as far away from the homestead as possible, and I'd sit and read and they chopped down the trees."

Smith's first attempt at a novel was rejected by several publishers, but he kept on writing while working as a government accountant during the day, or while he should have been working.

He persisted partly to confound the woman who had become his first ex-wife - "she said, 'You're useless', and she went off with some other guy she liked more, so I said, 'Well, I'll show you who's useless.' " - and partly because, with alimony payments, he couldn't afford to do anything else in the evenings.

His second attempt at a novel, When The Lion Feeds, was published in 1964.

It is one of his best, one of a handful that ought to endure among the classics of adventure writing. Another is The Burning Shore (1985) about the adventures on several continents of a nurse during World War 1.

Smith agrees with me.

"The women in some of my books are more powerful than the male characters, and that one was the breakthrough novel, because the female lead kicked the arse of all the males in the book."

Was he deliberately striking a blow for feminism? He looks at me like I've just ordered the vegetarian option. "No. I was involved at the time with a very kick-arse woman and she was fascinating, and I adapted her into the story." He's referring to his third wife, the writer Danielle Thomas, to whom he was married for nearly 30 years until her death from cancer in 1999.

Smith has never been much of a critical favourite, but his readers adore him. BBC newsreader Kate Silverton recently named her baby son Wilbur after the man who, she said, had first inspired her love of Africa.

But Smith has always had a hankering to be taken seriously. In the '70s there was a rash of films based on his books and he started worrying that he might just be seen as churning out screenplays-in-waiting.

So he wrote the most unfilmably complex book he could, the millennia-spanning The Sunbird (1972) "as a declaration of independence from the film industry ... I had at that stage built up enough hubris to know that I wanted to be respected."

The films were not great - to have one of your books made into a movie starring Roger Moore may be a misfortune, to allow two looks like carelessness - and he is happier nowadays as he still sells the film rights but the movies don't get made, "the best of both worlds".

Smith was once famous for the depth of his research. For his 1970 novel Gold Mine he worked in one for a few weeks ("I was a sort of privileged member of the team, I could ask questions and not be told to shut up"), and when Penrod Ballantyne crosses the desert by camel in The Triumph of the Sun (2005) he's doing nothing his creator hasn't done, Niso assures me.

For the ancient Egyptian books, however, his imagination is allowed free rein. "I picked a period of ancient Egyptian history which we know very little about ... So if anyone queries it, says that's not right, I say 'scuse me, how do you know?' "

There are more big-game hunters in Smith's oeuvre than spies in the works of John le Carré, and yet it is possible that he has slaughtered even more animals in real life than on the page.

He killed his first lions at 13, has narrowly escaped being gored by buffalo and has even shot an elephant, although he rather regrets that, saying it was "like shooting a sad old man".

But he sees hunting as a form of conservation that ultimately protects animals from extinction.

This man who used to live a life as adventurous as those of his heroes is no longer hale enough to camel-trek across deserts.

When was that? "It was 17th of September, 2009," sings out Niso. "The doctor said that he's pulled through, going to live, but he might never write again. Look at him, he's written another three books. So we celebrate every year. Mind if I sit here?" she asks, having migrated to our table.

Go ahead, I say. I get the impression Smith wouldn't know what to do with himself if he retired from writing.

Nevertheless, the last time Smith was in the news was for proposing to write less, and being handsomely remunerated for it. In 2012 he was reported to have signed a £15-million (R270-million) deal with HarperCollins for six novels that he would oversee but not be obliged to write much of himself.

Desert God, the first book issued by his new publishers, seems to me to have the authentic Smith flavour.

"Oh yes, absolutely. Every word is my own."

But will Wilbur Smith novels soon be farmed out to other authors? "I have selected two writers who have agreed to write with me, and we'll see how it goes. I think I will always write the Taita series entirely on my own. But I'm 81 and a half - don't forget the half - so obviously in the future I will be slowing down."

Having read about Smith's envy-inducing jet-set lifestyle and large number of exotically sited homes - until recently he owned part of an island in the Seychelles - I want to be reassured that there is a downside to fame, but Smith insists not.

He rarely feels like public property because, as Niso puts it, they live in a "controlled environment", going to club restaurants, never having people they don't know in the house.

"We are very secluded people," she says. Does he ever find that sort of life restrictive? "Not at all," he says.

One disadvantage of fame is that Smith's fallings-out with his children and stepchildren get revealed in the press. For instance, 20 years ago one tabloid published an interview with his estranged daughter Christian in which she complained about his parsimony and neglect.

"You just have to laugh it off," he says. Niso adds: "Hemingway said, for most people, the deepest hurt you can get is from your own family, because they know you well, they know how to target you."

Smith has admitted his devotion to his work may have contributed to the estrangement but today he sounds a more defiant note.

I can't help feeling his words might be less chilling if his good humour wasn't quite so unfailing; these pronouncements, worthy of the sternest Victorian paterfamilias, are delivered with a Pickwickian geniality that is more disconcerting than rage.

Does he ever feel like a man living in the wrong age, I wonder. Would he have been better suited to the more adventurous, less namby-pamby eras he has written so much about?

"I think I've lived in exactly the right era. Absolutely and exactly the right time. And I've picked the job that was perfect for me. And I sit here smiling and say, 'Well, I'm fairly satisfied.' " - ©The Sunday Telegraph, London