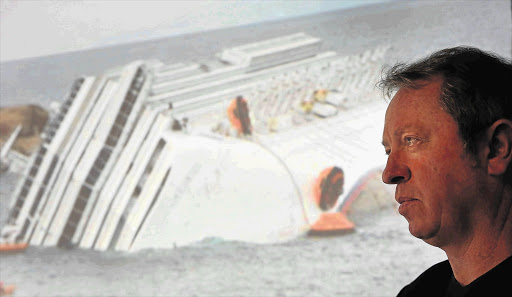 On July 14 this year Nick Sloane could relax for the first time in almost 800 days.

Sloane, 53, a South African who is one of the world's best marine salvage operators, had pulled off what many believed impossible: getting an ocean liner upright after it had toppled to its side during a piece of careless sailing. It was the biggest - and most expensive - salvage operation in maritime history.

This week, for the first time since the successful operation, which won him international acclaim, Sloane sat down to talk about his achievement.

He agreed to an interview before sharing his story with pupils at his alma mater, Kearsney College in Botha's Hill near Durban.

It all started for Sloane more than two years ago in New Zealand, where he was attending to the MV Rena that had been wrecked in February 2012.

"I got a text from the boss of Titan Salvage, Richard Habib. He asked if I was interested in being involved in a very large wreck removal in the Mediterranean. I said yes. I thought it might be the Concordia," said Sloane.

The Costa Concordia had run aground on Giglio island, Italy, on January 13, 2012, its body resting on two natural reefs. Dozens of people died. The ship's captain, Francesco Schettino, has been charged with 32 counts of culpable homicide. He is out on bail.

Sloane knew it would be a big job and wanted to head home to see his wife Sandra and their three children before the work began. But Habib said no.

"He said we didn't have the time. I had to get there immediately."

Two days later, after finishing the work in New Zealand, he was on his way to Italy.

When he reached the island, some engineering work was under way. It included drilling into the ocean bed so that steel platforms could be installed for the ship to rest on.

Then winter storms hit the island.

"I was standing on my balcony the whole night and I was just looking at it," said Sloane. "You could hear the waves breaking on it, and the noise. Then the alarms started going off, alerting us that she was moving."

The Concordia, still on its side, had sunk a further three metres.

"Many members of the team got depressed at that stage. We also weren't doing that well with the drilling operations. The client was upset, the authorities were upset. Everyone was just shouting at us. It was really tough," he said.

But, said Sloane, because the ship had not broken up completely, and with some modifications to their plans, they were able to get the project back on track.

Almost two years later it was brought to a successful conclusion. On Monday July 14, all the hard work was put to the test as they began to right the vessel in a process known as par-buckling. Sloane's wife was there at the time - and if not for her, the operation might have been delayed an extra day or two.

"Sandra was only there for four days, and we had bad weather the night before the par-buckle, so I said we were perhaps going to postpone it. She said 'no'; she was flying home the next day. I said okay, we're going to do it."

Nineteen hours later the Concordia was upright for the first time since it had run aground.

"I knew we had prepared pretty well. We had done as much prep as I'd ever done in any salvage operation. But then you start doubting yourself and asking: 'Have we forgotten about something simple?' Finally she had been safely par-buckled. There were many high-fives.

"All the tugs started blowing their horns. Church bells were ringing. It was incredible."

After a few hours' admin, it was finally all over.

"I said to my team that it was too early to go out for some wine and too late for a cappuccino, so we should go have some beers.

"That night we had a braai - we had a couple of pigs, a couple of sheep. We showed them a good South African braai."

Seven days later, Sloane boarded the Concordia as it made its final voyage from Giglio to Genoa, where it is in port waiting to be scrapped once investigations have been completed.

For four nights he slept on the massage bed in the ship's spa. He read books and even hit golf balls off the deck.

On July 27, his work was done and he could start preparing to head home to Somerset West for longer than a month for the first time in 27 months.

Sloane said he would not be chasing another big salvage any time soon.

"I want to take a few months to chill. My twins are in matric. They were in the first week of Grade 10 when I went to New Zealand, and now they're in the last term of their school life, so I want to spend time with them. Until the end of the year I'll just chill out," he said.