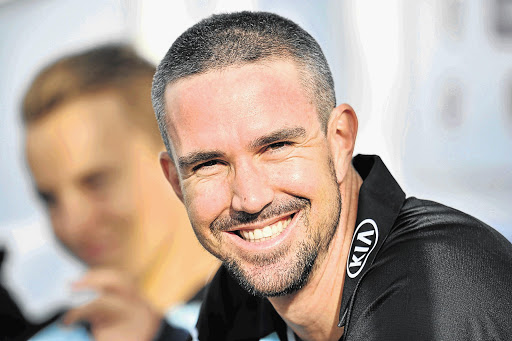 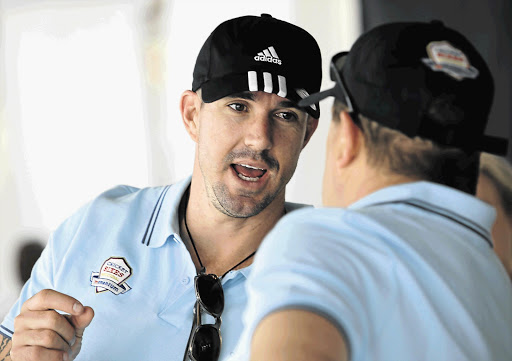 Cricket's bad boy, Kevin Pietersen, has returned home. And only in South Africa can the "clever" chapter titles in his book - such as "Doos and don'ts of Textgate" and "Say hello p**s, say goodbye p**s" - be fully appreciated.

With his bestselling autobiography, KP, bringing a barrage of criticism, Pietersen took refuge in a round of golf with one of his greatest cricketing adversaries - former South Africa captain Graeme Smith.

South African-born Pietersen, whose explosive autobiography is testing the stiffness of the English cricket establishment's upper lip, was due to play in a star-studded sixes tournament in Johannesburg yesterday.

On Thursday night, when he boarded his flight to South Africa, he posted a sarcastic message that implied Bopara was a bore: " ... Awesome tweeting! Excellent for my sleep to Africa!"

Bopara responded with: "yeah I'm not surprised it's putting u to sleep, u don't have the brain capacity to understand, therefor u just shut down."

When Pietersen pointed out that Bopara had misspelled the word "therefore", Bopara called Pietersen patronising and advised him to "... just read your own book that should help u get some ... sleep on the flight".

By Friday morning the banter had turned brutal.

"Good job KP," one of Pietersen's 1.98 million followers posted. "Show that dumb immigrant who's boss. Go back to Pakistan you Paki ... #curryeater."

Bopara, who was born in Forest Gate, London, tried to get Pietersen's attention with, "Erm kev I think some people took it a bit too serious ... "

But Pietersen had left that mess behind and moved on: "Good morning, Sawubona, Goeie More, South Africa ... so good to be here!"

From there he segued swiftly onto the golf course at Royal Johannesburg and Kensington, where he played a round in the company of Smith, Jacques Kallis and Damien Martyn on Friday.

All wereinvolved in the sixes tournament at the Old Edwardians club in Johannesburg, as was Pat Symcox - a family friend who leapt to Pietersen's defence.

"I very rarely have heard a cricketer say anything bad about him," he said.

"I have only heard people saying he is misunderstood.

"I've never been on a cricket field with him, so I can't say what he's like when he walks over the rope but when you're having a beer with him, talking about cricket and life, I find him to be a hell of a nice bloke."

"Never in the history of cricket has an establishment been taken on in this way. Geoff Boycott and others have taken them on, but never to this degree."

Back in England, Pietersen would seem to be more misunderstood than ever in the wake of the release of his autobiography on October 9. In it he claims a bullying culture pervaded the dressing room under former coach Andy Flower and senior player Matt Prior.

The chapter titles reveal the tone of the book, which was ghost-written by David Walsh, a renowned journalist whose dogged determination led to Lance Armstrong's exposure as a drug cheat.

Chapter six is titled "Flower. As in dour". Pietersen describes the Zimbabwean who took England to the No 1 test ranking as, "Contagiously sour. Infectiously dour. He could walk into a room and suck all the joy out of it in five seconds. Just a mood hoover. That's how I came to think of him: a Mood Hoover."

His nickname for hard man Prior was "the Big Cheese". Chapter 20, therefore, is headed, "Le Grand Fromage".

In 2012, Pietersen made disparaging comments about England's then captain, Andrew Strauss, in text messages to members of the South Africa team touring the UK.

That controversy is covered in "Doos and dont's of Textgate". More South African-flavoured humour is to be had in chapter 13's "Say hello p**s, say goodbye p**s".

The most stinging question asked of Pietersen so far during his efforts to promote the book has come from BBC talkshow host Graham Norton: "I want to put this nicely," Norton said. "But reading the book, it strikes me that maybe, just maybe, team sport's not for you?"

The release of KP in South Africa was "imminent", according to Jonathan Ball publicist Jean Pieters.