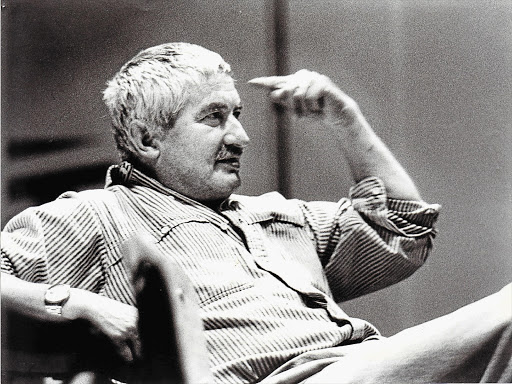 Dieter Reible, who has died in Poland at the age of 85, was a revolutionary German director who staged possibly the bloodiest, most graphically violent and controversial play ever seen in South Africa.

This was Shakespeare's Titus Andronicus, which played to a full house every night for four weeks at the Hofmeyr Theatre in Cape Town in 1970. Local theatregoers had never seen anything like it.

Reible had a black man, Aaron the Moor (played by a white actor painted black because black actors were not allowed to perform with whites), fornicating on stage with a white woman, doggy style.

The shock effect was particularly great because the play was in Afrikaans and the audience, on the first night at least, were mostly conservative Afrikaners who did not know what they were in for. There was an uproar in the Afrikaans press, but it was highly praised by respected theatre critics in the English press.

There was no set, just a white sheet on and around the stage drenched with gallons of fake blood.

It is believed that more programmes were sold for that production than for any production before or since in South Africa, partly, it was suspected, to give the audience something to hide behind when the scenes on stage became too graphic. Members of the audience fainted or rushed to the toilets to vomit.

The dress rehearsal was attended by black stagehands and their families because they were not allowed to attend the ordinary "whites only" performances. When Aaron the Moor held up his black child and proclaimed that he would take him to the woods and turn him into a warrior, the black audience rose screaming to their feet. Women ran towards the stage holding up their babies.

"It was hair-raising," remembered Reible.

Reible was born in Berlin on June 24 1929. He lived there through the horrors of World War 2 and at 15 was forced into the army. He turned 16 in a British prisoner of war camp. After his release he did manual labour clearing rubble from the bombed towns and cities. He never got a high school diploma or went to university. His only formal qualification was as a locksmith.

He joined a theatre group and began acting. There was so little money that people gained admission by bringing coal to heat the theatre.

He began directing, which quickly became the passion of his life. He never forgot his first big production for an established company. After the first run-through he was feeling very pleased with himself, until the most senior actor in the company stepped forward and said: "Mr Reible, we've done our job, when exactly are you going to start doing yours?" That, he said, was when he realised there was a lot more to directing than just letting the actors get on with it.

In 1969, Pieter Fourie, then the artistic director for drama at the Cape Performing Arts Board, saw a production of Richard II by Reible in Frankfurt. He found it so spellbinding that he went backstage to meet the director and invited him to South Africa to direct a Shakespeare of his choice. Reible chose Titus Andronicus, which was Shakespeare's least fashionable play at the time, and Fourie commissioned the enfant terrible of Afrikaans literature Breyten Breytenbach to do the translation.

Fourie, a bit of an enfant terrible himself who loved stirring things up, was delighted by the response to the play and asked Reible to direct Uys Krige's translation of King Lear the following year. His choice of Reible was particularly daring because Koning Lear was intended to inaugurate the new Nico Malan Theatre in Cape Town, built by the National Party as an apartheid showpiece.

The fact that the play lasted four hours only added to the sense of outrage, which grew as white bodies piled up around a huge African anthill on two revolving stages.

Government rage and a furious campaign of vilification in the Afrikaans press hastened Reible's departure for Germany, where he cemented his reputation as one of the best theatre directors in the world.

In 1980, Fourie decided to bring him back to do Faust. The South African government did everything in its power to stop him by continually delaying the issue of a visa and work permit. In sheer frustration Fourie appealed to the chairman of the Capab drama committee, Professor Merwe Scholtz, who was also a senior member of the all-powerful secret Afrikaner organisation the Broederbond.

After yet another delay on the eve of Reible's departure for South Africa, Scholtz phoned the minister of the interior, Alwyn Schlebusch, who was nicknamed "Klipoog" because of his intimidating, don't-mess-with-me stare and attitude.

"I expect Dieter Reible to be on the plane tonight," Scholtz told him. He was.

After Faust, which noted theatre impresario Pieter Toerien described as "one of the most exciting experiences I have had in my life", Reible directed the Oresteia trilogy, Medea, The Women of Troy, The Lion in Winter, Jean Genet's The Blacks, Waiting for Godot, Die Storm (The Tempest), Macbeth, Cymbeline, Strindberg's Playing with Fire and many more.

He didn't have much time for protest theatre in South Africa, which he thought was too obvious and mostly preaching to the converted. "That's not theatre, that's a newspaper article," he would say.

Some thought Reible's work was rubbish, others that it was brilliant. Some actors found him intimidating, arrogant and dogmatic, others loved the way he challenged them to do things that were way out of their comfort zone, and the sense of intimacy he brought to his work with them.

Certainly, he fundamentally changed the way a generation of young South African directors looked at theatre.

He believed theatre should be a visceral experience. "You don't have to understand art, you have to feel it," he said.

He saw theatre as food for the soul as well as the brain. His object was always to make people think. The biggest compliment for him, he said, would be if an audience walked out after a play without applauding.

Reible was married four times. Wife No3 was South African actress Mitzi Booysen. They were married for 12 years and had a daughter, Antonia.