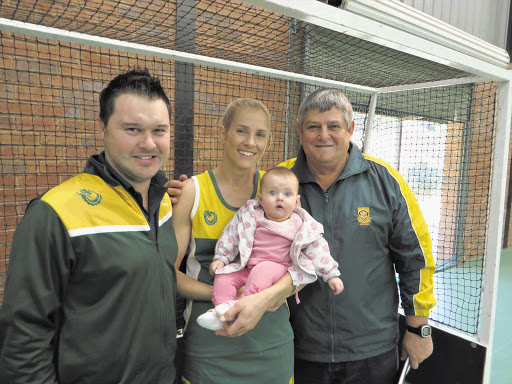 If Cindy Hack is daddy's little girl it doesn't show in the hockey arena.

The South African women's indoor captain, who will lead the side at the World Cup in Germany next month, gets no favours from her dad, who happens to be the national coach.

Lennie Botha has coached his daughter on and off over the years, starting from when she was at school.

"It was tough because some kids would say 'you're only in the team because of your dad'. [And] he was always harder on me than the other players," said Durban-based Hack, who made the SA women's outdoor team without the help of her father.

Indoor hockey in SA has grown substantially in the past few years.

Allistar Fredericks, who competed at the 1996 Olympics in Atlanta, helped to start the junior PSI league in 2008 when there were three franchises.

The SA women's team enjoys a sponsorship from Spar, which will fund the trip that costs about R40000 a player. They didn't get to the 2011 World Cup because of lack of finance.

The Sunday Times understands that the SA women's outdoor team is set to lose its Investec sponsorship, said to be worth R8-million a year.

"I was at a junior tournament and the talent was phenomenal.

"We were watching them doing things that we weren't doing at that age - like drag-flicking. Pietie Coetzee was the best drag-flicker in the country, probably in the world, but in South Africa there was nobody after her.

"Imagine the potential we have coming through the schools."

Indoor hockey is played on a court up to 44m long and 22m wide, and boards along the side keep the ball almost permanently live.

It's a fast game over two 20-minute halves. "There are only five players on the court at any time," said Hack.

"It's exhausting - in my first international back I was putting up my hand after three minutes asking to be substituted."

After quitting field hockey in 2012 to get married and have a baby, Hack continued with the indoor game.

"I have more of a passion for indoor. Outdoor required much more commitment, with training camps lasting up to a month.

"I can't do that anymore with my daughter."

Hockey is a family affair for Hack, 30. Husband Ryan is coach of the SA men's indoor team that will do battle alongside her outfit in Germany.

"My mother will be coming across with my daughter, who will turn one on the day of our first match against Holland."

The team departs next Sunday.