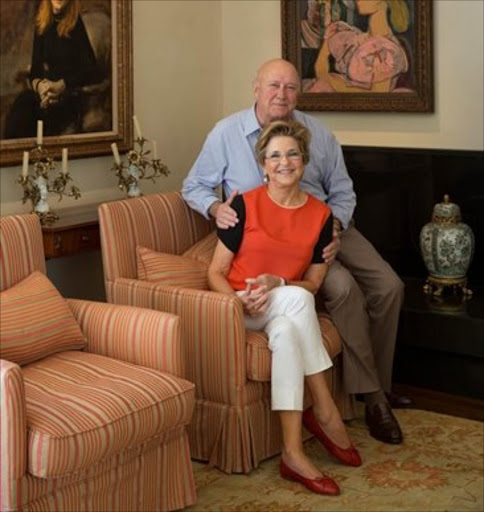 For most South Africans, FW de Klerk's 1990volte face speech was jaw- dropping. In a just-in-time bit of politicking, it promised, among other things, the release of Nelson Mandela.

Now, 25 years later, Frederik Willem de Klerk, a lawyer and Nobel prize winner, has been long retired from politics, but remains an amorphous figure most people don't know what to think of.

Many feel they should be grateful to him but are not and would rather forget him. Recently, a Twitter fight emerged over naming a road after him, signalling a country in racial tatters.

Who is this last white president? Where does he live? Is he in touch with present-day South Africa? Has he even met President Jacob Zuma? "I had one meeting with President Zuma five years ago. I have tried to arrange follow-up meetings, but without any success."

Their house in a suburb on the Atlantic Seaboard is pretty, less ostentatious than most houses in the road. It is furnished in the style of a smart European apartment, with signature curtains and upholstery, Louis XV chairs, expensive pictures, soft sofas.

Sitting in these posh surroundings, FW reminds me of a large, well-kept baby. In his blue shirt and his pale skin he has the peachy quality of a happy infant.

"Look at this," he says, bunching his shirt round a balloon-like protuberance. "It is a hernia. I call it my third breast."

He does not look as dour as in his photographs. "He puts on a special face," says his wife Elita. "I have told him not to pose."

He has an unexpected charm, a man who at 78 carries power and sexual authority.

At times his face is that of a shrewd old Voortrekker and still retains the seeds of the old National Party archetype.

A portrait of his second wife, Elita, on the wall, by famous English portraitist Norman Hepple, reveals a young girl, curled up in a way that shows a beautiful tenderness. More even than politics, it is the passionate love for this woman that seems to have guided him through the tough times.

Elizabeth Lanaras, Elita, was born in 1952 in Kolonaki, a suburb of Athens. Her father became a highly regarded shipowner.

They met in London in 1989 before FW became president. Both were married.

Like many Greeks she wore an evil eye amulet to ward off harm. In an impetuous act on the night they met, she took it off, and gave it to FW.

He is reported to have said: "I was surprised and charmed by this young, intelligent woman who possessed a wisdom beyond her years." A sentence which, even after all these years, sounds ludicrously artificial.

Their lives could not have been more different. She was the Greek-born wife of a multimillionaire. His world was the complex one of South African politics.

As news of the affair spread, people asked: Who is she?

"From the beginning," he says, "we were soul mates. We tried to save our marriages.

"For two years we did not see each other. But our love was too powerful."

The couple are casually but expensively dressed. FW has long ago left behind the shiny suits and shoes that looked like meat pies. They look well cared for, like a pair of expensive vases, two people who live in the marzipan layer of life.

The room is touched up with pots of orchids. Elita loves flower arranging and as the daughter of a wealthy shipowner, and the chatelaine of many houses, she is an expert homemaker.

Our interview has been carefully choreographed. She is his wingman, monitoring our conversation. They are both suspicious of journalists. Elita explains: "In the well-bred families of Europe to 'appear in the papers' is not done."

"I hate gossip," says FW, perhaps because in the past the gossip has often been about him. "We are just the opposite of show-offs," she says. "But we do love coming back from dinner parties and having a post mortem, don't we, Evia [her pet name for him]?"

"I call it a report-back," says the man known to be eloquent and who wrote the 1990 speech himself.

She stares at me in surprise. What? There is silence. Finally she says: "We are blessed with an amazing lady who runs our home and does the cooking. She loves to try new recipes. I am very good in finding them but not of course making them.

"We do entertain a lot. We love it and have a wide circle of friends." FW adds, not to be left out, "My cooking is limited to braais."

"Ah," she says, "and we diet. We are always on a diet. No, not Tim Noakes, but something similar."

On the subject of FW's health they are more expansive. "I gave up smoking 10 years ago. I used to smoke for 54 years and I have a pacemaker," he says proudly.

"After he turned 70 he nearly died," Elita says. "He had cancer in the colon. The operation went very well but two days later his lungs collapsed. He was put in a coma for nine days."

After that they moved from their farm in the winelands to town, which Elita loves.

"Living in town I am happy. I am after all an urban person."

"When I met her," says FW, "she was living in the middle of Hampton Court Park with no neighbours."

Was his decision to abandon apartheid sudden?

"I had been thinking about it since the mid-eighties. I said that the aim was a totally new and just constitutional dispensation in which every inhabitant will enjoy equal rights, treatment and opportunity in every sphere of endeavour - constitutional, social and economic.

"Like many South Africans I am very worried about the areas in which we are moving in the wrong direction, with regard to continuing inequality; the failure of our education system and unacceptable levels of unemployment, particularly among young people.

"I am worried that government policy is guided by the National Democratic Revolution ideology, which is introducing new forms of racial discrimination and domination."

After his retirement from politics, he saw the dismantling and then complete disappearance of the National Party, the grand edifice of apartheid. Was that meant to be?

"It was a very sad moment for me but the National Party had by that time transformed into the New National Party and was the most multiracial political party in the country. I still think that we need a party to fill the gap in the political spectrum that is generally represented by Christian Democratic, centre-right parties."

What moves him now in his retirement? Does anything give him cause for unrest?

"I continue to be deeply concerned about developments in South Africa and about the need to protect and promote the Constitution. I am also concerned about the degree to which the SA Communist Party, without winning a single vote, has succeeded in influencing economic policy and has taken over control of the National Democratic Revolution. I am worried by increasing corruption, symbolised by the Nkandla scandal, and the government's efforts to subvert institutions like the National Prosecuting Authority, the Hawks and the Public Protector."

How does he spend his day?

"I am a pensioner. My pension is less than the salary of the ordinary member of parliament, so I go on the speaking circuit to supplement."

He has also set up two foundations: the FW de Klerk Foundation, which checks all registrations coming before parliament for their constitutionality, and the Global Leadership Foundation, a think tank involving global leaders.

How does he keep fit?

"I hate exercise. I have never been to a gym in my life." Elita: "He always makes an excuse when I want to go for a walk, it's too windy or too hot."

"I have a pace maker and it is making good pace. I am much healthier since I've had it."

"You know we get so tired," says Elita, "We tend to flop, but one needs to regulate one's flopping otherwise one becomes inactive. Exercise is the answer. I need it to replenish my energy."

So what else, films, books?

"We read a lot, we love laughing and for five months of the year we are gypsies, travelling all over.

"We go to Athens and we go for 10 days to Italy or a few days to Greece. In London we stay in a little hotel off Sloane Square belonging to Adrian Gardiner."

Says Elita: "He needs constant stimulation. Politics had always been his stimulation, now it is his foundations."

FW: "When you get on in years you have to concentrate on your spirituality. I am a Dopper [the Reformed Church]. Elita is Greek Orthodox."

People are interested in his relationship with Mandela, who called him Hitler and was grumpy about sharing the Nobel peace prize.

"That was in the beginning. In the end we became good friends, visited each other's homes. When he died I was very sad about the loss of a friend but also sad to think about the degree to which his legacy of reconciliation, nation-building and uncompromising integrity is beginning to unravel."

As we leave, Elita opens the door and says, "Meet our sons." Out fly two over-excited cocker spaniels, the colour of spotted dick pudding, Ouzo and Grappa.

"As a politician who helped to lead South Africa from the dead end of apartheid to a non-racial constitutional democracy."

Any regrets? "I would do it all again."