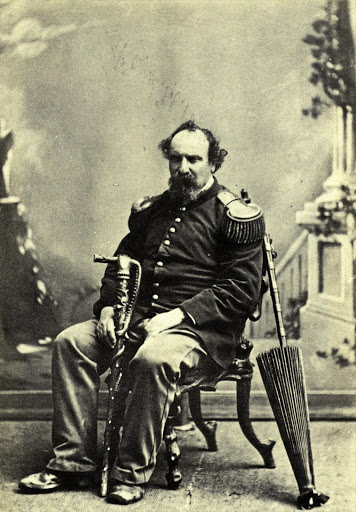 Norton on the move in 1869, captured by the pioneering photographer Eadweard Muybridge.
Image: Supplied

In 1849, Joshua Norton left Cape Town to try his luck in the California Gold Rush. He made a fortune, then lost it, then made another plan: to proclaim himself 'Emperor of the United States and Protector of Mexico'. He later became a gay-liberation icon and is still a cult hero in San Francisco. This is the story of Emperor Norton the First

South Africa has a longish tradition of exporting talented individuals who go on to fame and fortune in a magical universe called America.

We can all reel off a few of those illustrious names. Charlize Theron, Elon Musk, Dave Matthews. Terry Pheto, perhaps. That guy from The Mummy.

But few are acquainted with perhaps the most successful South African expat of all time: His Imperial Majesty Norton I, Emperor of the United States and Protector of Mexico!

Also known as Joshua Abraham Norton, he was born around 1818, in England. He came to South Africa with his parents, among the 5 000 British Settlers of 1820. His family were settled on the Lushington River near Port Alfred, but Joshua Norton spent his young life in Grahamstown and later Port Elizabeth, where he started and failed in business as a ship's chandler.

In 1841, the family moved to Cape Town, where they were among the founders of that city's nascent Jewish community. Soon afterwards, his father John and Joshua's two brothers all died.

Norton came into an inheritance of $40 000 from his merchant father. With few ties to South Africa and news of fortunes to be made in San Francisco, Joshua looked abroad. He emigrated to the US at the age of 30 in 1849, just as the California Gold Rush was getting into full swing.

He still enjoys the rare technical distinction of being both an 1820 Settler and a San Francisco 49er.

In the US, Norton got into business and was immediately successful. However, it all went pear-shaped when, during a rice shortage, he overpaid for a shipment of Peruvian rice. Several other rice shipments promptly arrived in San Francisco harbour and prices plunged. Despite a protracted lawsuit to recover his investment, Norton was ruined. This was in 1853.

He fought in court to save his assets but ultimately lost them to lawsuits and legal fees. He retreated from the limelight, only to return a few years later. And when he did, Norton's royalty complex had been awakened. He promptly declared himself emperor.

"At the peremptory request of a large majority of the citizens of these United States, I, Joshua Norton, formerly of Algoa Bay, Cape of Good Hope, and now for the past nine years and 10 months of San Francisco, California, declare and proclaim myself Emperor."

So ran the proclamation that appeared in the San Francisco Bulletin on September 17 1859, and in other local periodicals. It was to be the first of many.

While Norton's proclamations were not taken seriously, they seem to have struck just the right chord of pseudo-pompous, whimsical satire among readers to assure him a place in their hearts.

Over the next few decades, Norton I held forth via the newspapers on the social issues of his day. Ernest Cowan of the California Historical Society noted some of these in a biography he published in 1923.

With the Civil War raging in the east, in 1860 Emperor Norton dissolved the Union of the United States. In 1862, he issued a mandate to the Protestant and Catholic churches that they ordain him emperor, so that he could bring order to the country.

Also in 1860, he announced a blockade of the Sacramento River until the owners of the Steam Navigation Company, which had denied him transport to the state legislature, could be "brought to terms".

When, in 1865, a certain Mr Stellifer of New York also proclaimed a monarchy, and began styling himself "Reigning Prince of the House of David, and Guardian of Mexico", Emperor Norton was having none of it. He ordered as follows: "The legitimate authorities of New York are hereby commanded to seize upon the person of one Stellifer, styling himself King or Prince of the House of David, and send him in chains to San Francisco, Cal., for trial before our Imperial Court."

San Francisco in the 1860s was fertile ground for eccentricity, and the city produced many characters. However, it is Emperor Norton I, formerly of Algoa Bay, and Cape Town, who has proved the best remembered.

Perhaps it was his personality that earned him this longevity. By contemporary accounts, he was of a pleasant disposition. He would tour the city and inspect new developments with interest; he would curiously inquire about them but never overstay his welcome.

Norton's two most famous proclamations were remarkably prescient, clairvoyant, even. He ordered, in three proclamations of 1872, that the city of San Francisco build a suspension bridge "from Oakland Point to Telegraph Hill, via Goat Island" - and an underground tunnel.

The San Francisco-Oakland Bay Bridge (below) was eventually built in 1936, and the tunnel in 1974. It's a sign of the fondness San Franciscans still have for their emperor that today a change.org petition exists to name the bridge after Emperor Norton.

In his heyday, Norton was often to be seen about the city, as its population quadrupled from 56 000 in 1860 to 233 000 in 1880. His royal regalia, while somewhat shabby, was never less than impressive. He often wore a beaver hat with feathers and a rosette, atop his curly-haired head, or a military cap.

Otherwise he wore a blue military jacket with brass buttons and gold epaulettes on the shoulders (below). A supporter gave him a walking stick made from a grapevine, with a gold handle, which became his imperial sceptre.

During his reign, the emperor had the freedom of almost every restaurant and saloon in San Francisco, a privilege he exploited for the purposes of lunch, though not liquor. His biographer Cowan notes that he was "unusually abstemious".

Another biographer, Peter Moylan, tells how theatres habitually reserved balcony seats for him on opening night, with the manager escorting him to his place, while the house applauded.

He was to be seen around town with two street dogs, Bummer and Lazarus, and allegedly issued $25 fines to anyone he caught referring to the city as "Frisco". He also apparently issued his own imperial currency (below).

Norton's royal apartments were relatively modest. He lived at the Eureka Lodging House in a room that measured 5,5m². He was a member of the city's occidental lodge, and the Freemasons apparently paid his rent.

In 1867 he was arrested by a policeman and charged with "lunacy". The Evening Bulletin immediately took up his cause and protested this affront to his majesty in its pages.

"This kindly Monarch of Montgomery Street is less a lunatic than those who have engineered these trumped-up charges," Moylan quotes the paper as saying.

Freeing him, the court found that, "The Emperor Norton has never shed blood. He has robbed no one, and despoiled no country. And that, gentlemen, is a hell of a lot more than can be said for anyone else in the king line."

Emperor Norton I shuffled off this mortal coil on January 8 1880, when he died on the corner of California St and Grant Avenue - of a stroke, or sanguineous apoplexy, in the parlance of the time.

Norton's fame extended beyond the city. He was even immortalised in Mark Twain's 1885 novel Huckleberry Finn - the con-man character, The King, was loosely based on Norton. Robert Louis Stevenson also included Emperor Norton in his novel The Wrecker. He was featured in an episode of the Western TV show Bonanza.

Magnificently, almost a century after his death, Emperor Norton bequeathed his dynastic title to what became one of the largest and oldest LGBTI (lesbian, gay, bisexual, transgender and intersex) organisations on earth. He thus also became a global gay icon and, in a way, emperor of the homosexuals.

The Imperial Court System, or International Court System (ICS), was established in San Francisco as a grassroots organisation to lobby for equality and raise charitable donations in 1965.

Initially the organisation was an alliance of gay bar owners, a tavern guild to stand together against police harassment.

Founder José Sarria named himself The Grand Mere, Absolute Empress of San Francisco and the Widow Norton, retroactively declaring his marriage to the late Emperor Norton.

Sarria, who died in 2013, had become the first openly gay candidate for public office in the US when he ran for the San Francisco Board of Supervisors in 1961.

Norton was identified by Sarria, fondly known as "Mama José", as one who stood up for the underdog and also had the courage to be who he wanted to be.

For 30 years, the Widow Norton organised elaborate annual pilgrimages to the grave of her "late husband" at Woodlawn cemetery in nearby Colma.

This is where in 2005 she passed down her imperial torch.

This year, the ICS celebrates its golden jubilee, under Nicole Murray Ramirez, Queen Mother I of the Americas. The Court System has 68 chapters in the US, Canada and Mexico and has raised millions of dollars in charitable donations.

Another notable teller of the Emperor Norton story (there is no shortage) was William Drury. In his book, he floats the idea that Norton's mental instability may have had its roots in his South African youth.

Norton believed he was related to the Bourbon royal family of France - he had siblings named Louis, Philip and Louisa. In his 20s, in the years before he upped sticks for the States, he would have encountered a certain eccentric figure on the streets of Cape Town. A legendary local character, Isaac Moses, or Old Moses The Moneychanger, was a retired captain in the 60th regiment who lived out his dotage at The Castle.

Moses was known to parade through the streets of the city in his military uniform, smoking a Meerschaum pipe and uttering his catchphrase, "Alles flaussen und homboggery!" (It's all nonsense and humbug!).

Apparently the guards at The Castle would present arms whenever he approached and soldiers had to salute Old Moses, on pain of a tongue-lashing.

A decade-and-a-half later, disillusioned in business and now giving free rein to his visionary delusions of grandeur, Joshua Norton would declare himself Emperor Norton I, don a faded military uniform and adopt a persona similar to Old Moses, whom he remembered from the Cape.

These visions, conceived in Africa and honed in America, would later entertain a nation, and inspire a people's movement. It's right and proper, then, that South Africa acknowledge our contribution to America's royal line: Emperor Norton I, Emperor of the United States and Protector of Mexico.