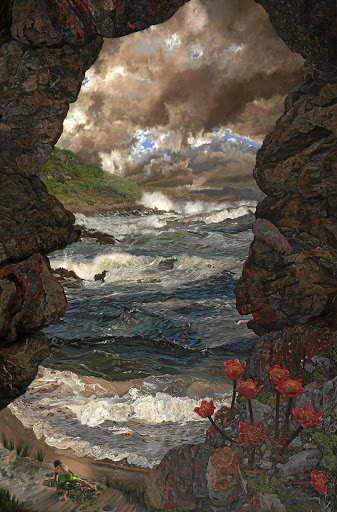 The spectacular new show of this South African artist zooms us into strange, romantic landscapes that unnerve and delight in equal measure, writes Tymon Smith

The first rule of looking at one of Deborah Poynton's large-scale paintings is to keep calm and carry on looking. The works in her new exhibition, Scenes of a Romantic Nature at the Stevenson Gallery in Joburg, are astoundingly naturalistic in their detail - each leaf of each indigenous plant meticulously executed in Seascape with Beach Umbrella (below).

But as your mind starts to look for clues to some greater meaning - what plants are these, where is this sea and what's the symbolism of the garden hose coiled on the earth in the foreground? - you may begin to drive yourself nuts.

Is the landscape in the background of Boy on a Stoep the Cape Town City Bowl (below)? Well, it certainly bears a similarity, but there's something missing. And from what vantage point in Cape Town can you see such a view? The answer is nowhere. The painting is based on a photo of the artist's son taken from outside their house in Tamboerskloof, but Poynton has taken things out of the background - the three towers of the Disa apartment block in Vredehoek. She's extended the mountain to block out the sky.

The places in these scenes are not real places you can visit and see for yourself: you can only see them here, in these works. They invoke the Romantic movement's fascination with man's smallness in the face of the vastness of nature - the swirling pinks and oranges of the sky in Seascape with a Sailboat are reminiscent of the sky in a Turner painting. The two boys in a boat (below) in another scene are dwarfed by the swampy vegetation they're navigating. As you look even closer, you can begin to see the sheer abundance of marks that make up the whole - the intensive labour of brushwork required to produce such detail on such a scale. This labour has characterised Poynton's work for a quarter of a century and was much in evidence at a retrospective of her work last year at the New Church in Cape Town.

Poynton has said many times that she doesn't talk about what her paintings mean. She believes this is best left to the audience once she's completed her work and they're standing in front of it - painting for her is about feeling, not intention.

Her new exhibition marks a bit of a departure for her - the large canvasses that take up the central space of the gallery are accompanied by a series of smaller drawings and five abstract canvasses that are made up of marks on white backgrounds, a sort of calligraphy of feeling that contrast with the forensic renderings of the landscapes and portraits. In an age when the phrase "painting is dead" is thrown around like a tennis ball, Poynton's work seems intensely alive.

"I don't know if people really know how to look at painting so they feel uncertain when they look at a painting: is this kitsch, is it good, should I worry that this is skilled or unskilled? I think there's a lot of uncertainty around painting and insecurity as well," Poynton tells me when I meet her in Cape Town.

The paintings and drawings in her new show are the product of 18 months of work and you get the feeling that Poynton is quite insulated from the world when she's painting. She doesn't do openings, engage with the rest of the art world or care that much about what's going on in the contemporary art scene. She is too busy laboriously creating her vistas of a world that's reminiscent of Alice's Adventures in Wonderland or the Maurice Sendak of Outside Over There - real, yet not, precise but impossible.

"I'm not really interested in art so I don't do any of the art world things at all. It's actually a shameful admission but I really only look at art up to 1850. I'm interested in constructs and that period of painting is highly constructed," says Poynton. She laughs before adding self-deprecatingly, "I'm an ignoramus, a complete ignoramus. I feel like one of those people who builds houses out of coke bottles. I was only at art school for two years, I'm totally sort of self-taught."

That may be, but this is her seventh Stevenson show and she recently had her first US show, so she must be doing something right. She's not a political artist - her work offers escape from the day-to-day life of South Africa. The foliage in some pictures, which I assumed to be from her native KZN, is in fact taken from a garden in France.

She muses that her work seems to "fall between every stool because people who are highly educated in art are perhaps deeply suspicious; and people who aren't just assume that their interpretation is what it is and they don't go beyond that and that's also fine.

"People can't stand paradox, it's human nature. We have to set up oppositions and choose and that's how we define who we are. So how can a painting be trite and sublime? How can it be meaningless and meaningful? To me, the paintings are incredibly contradictory and paradoxical."

There are some subjects in the portraits included in this show who will be familiar to audiences from previous shows, but there are no portraits here of photographers David Goldblatt or Guy Tillim, both former subjects of hers.

With so little to guide viewers as far as titles and information from the artist herself go, it's easy to see why Poynton is often asked about who the people in her paintings are.

The old man sitting naked on a stepladder in a garden in front of a house is a professor at the University of Cologne, whom Poynton has photographed over the years. The nude man in two paintings titled Idyl is her partner; the boys are her sons. She does admit that "it's become more difficult to find people to paint. They have to let go at a certain point and then I can feel that I can use their image - I'm using it, it's got nothing to do with them."

Poynton (below) paints from photographs - a medium whose invention ushered in Impressionism and saw the end of her beloved Romantic movement, but which she relies on for her own work. She says her process is not one of addition but rather, "a process of elimination. I always seem to start off really wrong. Like I want to put in a fox or something and then when I take that out somehow it becomes more interesting. So the hardest part is not how to paint but what to paint."

As for the drawings she's included, they hark back to her childhood drawing reveries. She likes "the experience of feeling again that sense of just being very large and looming over a small scene" - a reversal perhaps of the viewer's experience of her large works, which loom over and envelop you.

Having just turned 45, Poynton says this exhibition has changed the way she's working as a "mid-career artist". "I hate that term - what does it mean anyway?" She feels that "after 25 years of churning, something had to change. I'm in a strange space at the moment. I'm thinking of the word 'invention' and that's the word that's motivating me. I can't help what I do. I don't believe in free will, so I just carry on."

Scenes of a Romantic Nature is at the Stevenson Gallery in Johannesburg until March 20, 2015.