Porsche turbocharges ahead with new 911 models 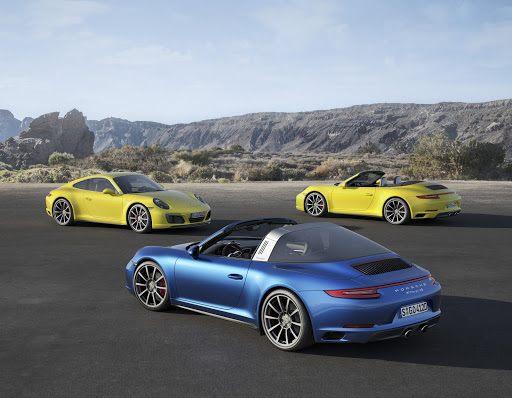 The extra turn of speed that owners will discover in the 2016 Carrera 4, Targa 4 and Carrera 4 Cabriolet is thanks to new force-aspirated engines - i.e., a hefty dose of turbocharging. It's a decision that may infuriate Porsche 911 purists but is key if the 911 is to continue being faster yet more efficient with every generation and therefore retain its crown as the best sportscar in the world.

In standard Carrera guise, the new 911s can output 370hp but opt for the Carrera S instead and the turbos spool up sufficiently to deliver 420hp. It means that with the optional paddle-shift gear box the hardtop Carrera can go from 0-100km/h in 4.1 seconds and the S can manage the dash in 3.8 seconds. Vast improvements over the outgoing models that needed 4.5 seconds and 4.1 seconds respectively to hit the same speeds.

Hopefully, this increased turn of speed will be enough to sate those purists who believe the car should remain turbo-less and who are still upset about Porsche changing from an air- to a water-cooled engine and from rear- to all-wheel drive.

Porsche understands that with the 911, which has been in production now for over 50 years, it is the guardian of one of the most iconic and desirable cars in automotive history.

However, it also has a responsibility to the next generation of clients and to the environment. It points out that more than one third of 911s are now specified with four-wheel drive so that more of that performance can be used more of the time, and as for fuel consumption, the new models have reduced their thirst by between 0.8 and 1.2l/100km.

As well as new engines, the 911s get a host of new toys and technological features such as the steering wheel-mounted mode switch for changing between performance settings and the option of rear-wheel steering. The cabin gets a completely reworked touchscreen infotainment system that can process handwritten input for navigation, offers live traffic updates and will connect simply with an owner's smartphone.