Boyz N Buck$ are here to inspire a generation 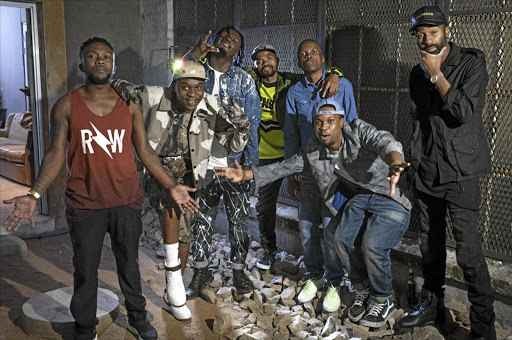 This collective of Joburg creatives are trend masters of music and fashion and their plan is to change the world, writes Lwandile Fikeni

"Divine intervention is what brought us together," says Phiko. He drags out the word "div-iiiine" as though if stretched, it could give coherence to the collective for which Phiko is communications liaison, rapper and trend forecaster.

The collective is anchored in both music and fashion. Riky Rick's album, Family Values (watch a music video from the album below), has just hit gold and he has signed a deal with Puma. Dokta Spizee is working on new music, as is Bhubesii, who is also designing a summer fashion range for Punk & Ivy and a campaign for Mini Cooper.

Phiko's focus is the urban street - skateboarders, BMXers and motocross kids, plus the young rappers, stylists and designers. He is extending his signature motocross gear range while finalising the next Boyz N Buck$ live show.

Mkay Frash is working on new episodes for the YouTube show Hunting for Kicks, in collaboration with the Shesha brand. Stilo Magolide is working on new music, uSanele on items for Instagram trend-setters and cap designers Goliwood, and OkMalumKoolKat has recently dropped the 100K MaCassette mixtape.

Makhathini is a polymath, with his fingers in street couture, TV presenting, reality shows, radio and anything else that has to do with "cool". He is currently shooting Top 50 with Channel O and a 10-part interview series for Vuzu TV. On Wednesdays he presents V Entertainment on Vuzu, on Fridays he does Turn Up, and his reality series, Forever Young, will screen on TV in January.

It is rare for them all to be together in one room. We are at the back of Carfax in Newtown, in a room reserved for artists taking part in the RAW Sessions - a collaborative project between Boiler Room and denim brand G-Star RAW.

Musically, Boyz N Buck$ is a fusion of electro and traditional sounds that created digital maskandi, whose proponents were OkMalumKoolKat and DJ Spizee during the Dirty Paraffin days. This synthesis expanded South Africa's hip-hop soundscape, and here, at the RAW Sessions, the power of their music meets the untethered energy of their audience.

Words cannot do justice to their reception on stage, the way their lyrics are echoed by the screaming, screeching crowd that is too hyped, too high or too drunk and in any case too entranced to have any control over itself.

The audience pressed so intimately close to the collective during the performance that it and the artists began to form a single unbroken sentence.

The collective's premise is collaboration. Its vision is the simple idea that by sharing ideas and perspectives young people can inspire each other to move towards a future in which they are capable and victorious.

"Thing is, you need people," says Makhathini. "If anybody thinks they can do it by themselves, that's the fault right there. Ask for help."

"We look at those options we didn't have growing up," says Bhubesii. "We want to inspire a generation; we want kids who grew up like we did to know, 'I can be a painter, I can make hats, I can be a designer, I can be an academic.'"

"Or own a motique, work for Redbull or fuck with Nike," says Mkay Frash.

"What we want people to follow is the mindset," says Phiko. "And the mindset is: if we can do it, you can do it too."

"Boyz N Buck$ ain't about projects," says Dokta Spizee. "Life is a project. We don't make things and others follow. We lay foundations and they carry on building."

The members are not fazed by copycat fashion brands that have appropriated their style. They appreciate the compliment. However, says Bhubesii: "These brands need to get it on point; they need to outsource; they need to get young people who are researchers. Don't try to talk about cool kids if you don't have a cool person on board. You can't talk sneakers without hollering at Mkay, for example."

"We outchea to inspire 'cos we were inspired," says Phiko, a shy smile disappearing into the thicket of his beard.

"And we're inspired by each other and other people, too - the legends you know, the raps," says Makhathini.

"Everybody in Boyz N Buck$ is doing themselves and we support each other to accomplish that," says Mkay Frash. "We're changing the fucking world, dawg!"