Talking to animals is completely normal for this 10-year-old 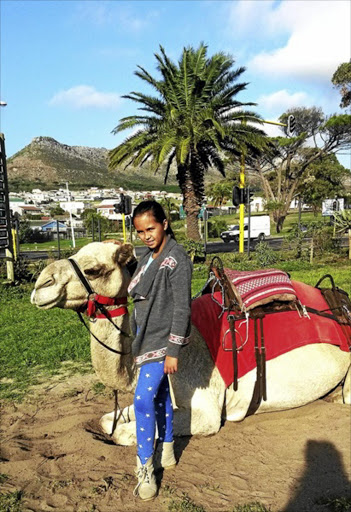 Animals express emotions and demonstrate a depth of compassion and wisdom through this telepathic child, writes Shellee-Kim Gold

'He's not coming back this time but he is healthy." I breathe a sigh of relief after hearing this news about my beloved tomcat, Avalon. It's been more than a week since he left - again.

It has taken 10-year-old Matilde dos Santos to ease my anxiety. Yet the young lady has never met Avalon in the furry flesh. She has obtained this information from his older brother's photograph, which she has been gazing at while chatting to me over the phone.

The young Capetonian has been able to engage telepathically with animals since she was six years old. "I walked past a dog and heard a voice. Eventually I realised it was coming from him. Talking to him felt normal," she says.

Since then, her inner world has been populated with the voices of a host of animals, including cats, dogs and goldfish. After doing an animal communication course, Matilde's confidence grew. Discovering what ails animals is her priority. Since her goldfish died recently, the remaining fish has told her that it needs a new friend.

"I connect to animals by looking directly into their eyes and sending my message in pictures and words. I do that with my heart and brain. Then I hear a voice or see pictures back from them," says Matilde.

Telepathy is best described as mind-to-mind communication. Those who study it say it is the most natural form of communication between species, but humans have largely lost the art of consciously practising it.

We're stroking a cream-coloured camel at Kommetjie's Imhoff Farm. Izak is 30 years old and by all accounts he and the three other resident camels have a pretty cushy job, carrying humans between their humps on bush rides that are popular on weekends and school holidays.

Nonetheless, Izak sometimes feels saddled with the bulk of the workload, because he is the most even-tempered.

"Sometimes he needs a break and on quiet days he just wants to relax," says Matilde after listening attentively to Izak. Of his origins, she says: "Far away in a desert. I see men in long dresses. He was taken from his family quite young and his best memory is when he first saw his mother. When he was coming here his breathing felt quite weird to him. He was inhaling sea air and he was afraid."

Through this child, animals express emotions and demonstrate a depth of compassion and wisdom. When I ask if Izak has any message he'd like to share with humans, Matilde replies: "Do not pollute this earth and that will help animals and humans to function better."

At Matilde's school there is a farmyard, and in one of the enclosures is an anxious sow with eight tiny, black-spotted piglets. "She's unhappy and afraid the father's going to hurt her piglets," says Matilde. "She doesn't like him sitting with them."

Matilde doesn't think telepathy with animals is exclusive to only a few human beings. "My mother told me never to give up with my communication and my father said 'believe'. I think all humans can do this. They just need that belief."

Her mother, Sandra, is open to the concept of reincarnation and her father, Arnoldo, is a masseur and Reiki healer. After he taught Matilde Reiki, a hands-on energy healing method, the junior Doctor Dolittle has used her healing talents on animals.

At a horse farm in Noordhoek which I visit regularly, a black mare and her chestnut colt nuzzle our hands. Dolphins and horses - "they have something unique" - are two of Matilde's favourite animals. I ask whether the horses remember me. "Yes, and you've improved from the last time you were here with them," says Matilde. She could not know that I was in a chaotic personal state then, but the horses did.

The looming question must be asked: how is Matilde able to discern the difference between an animal's voice and her own imagination?

"I know the difference between my own voice and brain and the other voices in my head," she says with certainty.

Arnoldo begins hounding her for telepathic help on house-buying. "Ask the horse what figure we should offer on the house we saw last week." He gets a favourable response and smiles. "We have to exploit her talent, after all," he laughs.

sub_head_start What animals might say if we had the ears to hear them: sub_head_end

CAT: I think, therefore I sleep.

DOG: That's my favourite! No that! Oh wait! That!

PARROT: Why Polly? Why not Aloysius?

CHAMELEON: Change is the only constant.

HEDGEHOG: No, I will not share this hedge. Get your own hedge.

GOLDFISH: Who the hell are you?

HAMSTER: Sometimes I feel like I'm stuck in an office.

HERMIT CRAB: Leave me alone. Go sleep with the fishes.