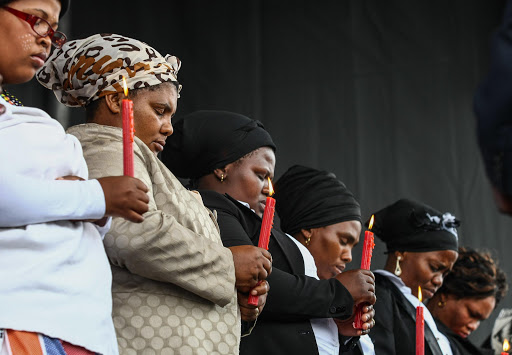 16 August 2014 Miners gathered at the Kopie to commemorate the second anniversary since the police killed the 34 miners during the strike in Marikana. The Marikana widows carried candles during the event. File photo
Image: Simphiwe Nkwali

Chilling – a word local film-maker Dara Kell uses to describe the moment she watched a woman put on overalls to work in a platinum mine‚ just as her husband had done before he was killed‚ protesting for a minimum wage.

The widows of Marikana is one of the subjects of four short films Kell premièred in Johannesburg on Monday night‚ in partnership with the Socio-economic Rights Institute (Seri).

The four films depict the experiences of Seri staff and its clients‚ in their struggle to access justice and realise the rights enshrined in the Constitution.

Kell‚ who is also the brains behind the award-winning documentary film Dear Mandela‚ says she chose to tell these stories because they show what happens to litigants outside of the public display of the courtroom.

“It's not just about litigation and going to the court‚ but also about creating spaces where poor communities are not left out of the conversation‚” she said.

The collection of four films is made up of: - Imbokodo – documenting the experiences of the families of mineworkers killed at Marikana‚ - The Streets at Stake – looking into the effects the 2013 Operation Clean Sweep had on informal traders who had been forcefully removed from Johannesburg's streets‚ - The Road Home – focusing on the struggle of the residents of inner-city Johannesburg's Chung Hua Mansions‚ who had been evicted from the building they had lived in for many years‚ and - Radical! - exploring the experiences of some of the young human rights lawyers who worked on these cases.

Kell says the idea was to highlight the cases‚ which had not received enough media attention. "[It's] a little bit of an untold story‚ or a forgotten story‚ that we felt needed to be separated‚” she said.

In all of the cases featured in the film the applicants‚ Kell's film subjects‚ were successful.

“Many people are still living extremely difficult lives but there are possibilities and we've really tried to focus on the hopeful aspect.

“The theme of unity really comes through a lot. In each case it's about one particular community experiencing some kind of violation of their human rights.

“Whether it be them being evicted out of one particular building they've been living for decades or the informal traders‚ [who] had permits to trade on the streets‚ and had been trading there for decades [before] they were just violently evicted and totally treated with absolute disrespect.

“When communities are unified and come together with lawyers who know how to work with communities in a very particular way … [it's] a very grass roots way of using the law to make the constitution a reality.”

One of the highlights of Kell's film-making journey was her trip to Marikana.

“Going to Marikana and actually meeting the women whose husbands had been killed‚ [seeing] where they lived and actually finding out they had actually asked Lonmin if they could take over their husband's jobs.

“Just seeing them‚ particularly one of the women‚ Betty Gadlela‚ putting on these overalls‚ knowing that that is exactly what her husband had been doing before he was killed while protesting for a living wage. That for me was really just a chilling moment.”

Kell says film making is an important tool to bridge gaps in a society with divisions – one which humanises an issue.

“I do think that there's something special about sitting in a dark room with a lot of people and watching something together. It's a way to open up conversation and begin a conversation that might be difficult otherwise.”