Local photographers are finally getting more exposure for their art 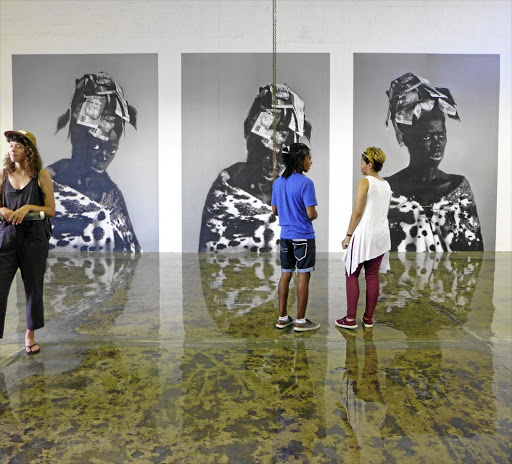 South African photography has long been dogged by a contradiction: while many of its practitioners are internationally celebrated, local art collectors have generally shunned the medium.

The talk at the Cape Town Art Fair last weekend reiterated this pattern. Little was said about the Goodman Gallery's remarkable tribute show for the late photographer Thabiso Sekgala. Instead, the focus was on the hoard of nearly a dozen paintings by Robert Hodgins painstakingly assembled by Goodman Gallery curator Neil Dundas.

Outside the fair, though, it was a different story. On Wednesday, a day before the opening of curator Tumelo Mosaka's well-organised fair, collector Tammi Glick launched the Maitland Institute — a new space devoted to "art and ideas" — with an exhibition by Zanele Muholi.

Titled Somnyama Ngonyama ("hail the dark lioness"), the exhibition is composed of six larger-than-life self-portraits of Muholi in eccentric costumes. In one sequence she wears a cowhide shawl and R100 notes as headwear. The dark tonalities of the portraits are achieved in post-production.

"I wanted to take a different approach and create a new kind of dialogue," said Muholi, best known for her portraits of black lesbians.

Her self-portrait project is still a work in progress and once finished will total 365 works. Muholi first exhibited her self-portraits at her New York dealer, Yancey Richardson Gallery, in October 2015. Conventionally printed and framed, they were on sale for between $6,200 and $7,700.

Her photographs here are printed as wallpaper. The unconventional display method forms part of Glick's plan to offer a space where artists and their public can appreciate and think about art beyond the imperatives of retail. Next up will be a show of paintings by Penny Siopis.

Glick's interest in showing photography in unusual ways dates to 2012, when she and dealer Joost Bosland held an exhibition in Woodstock, Cape Town. Titled Copy Shop and held in an empty unit of The Stockyard, a Daleglen office development on Ravenscraig Road, the show included photocopies of David Goldblatt's famous 1980 photo of a Miss Lovely Legs pageant in Boksburg.

The edgy styling of Glick's new initiative will doubtlessly not influence mainstream tastes. That role has now been assumed by the Zeitz Museum of Contemporary Art Africa, which when it opens in September will include five dedicated photography galleries.

Roger Ballen, the Johannesburg photographer best known for his 2012 music video for Die Antwoord, is closely linked to this new development.

Last week it was announced that Ballen, through his eponymous foundation, had made a financial gift to the Zeitz museum's endowment, as well as donated one signed edition of all his photographs since 1968 to the museum's permanent collection. He will also donate a signed edition of all future work, a pledge enabled with the support of the Swiss-based Eiger Foundation.

The transactional nature of the gift will see the museum's photography halls named the Roger Ballen Foundation Centre for Photography. The Eiger Foundation is further contributing towards the establishment of a dedicated post of curator of photography, yet to be filled.

"It represents a blueprint for a new young institution of how we can all come together, of how it can actually happen," said museum director Mark Coetzee.

Ballen, who first met Coetzee in 2010 when he was exhibiting his photos at the 17th Biennalle of Sydney, likened the Zeitz museum to "a rocket ship ready to take off. I really feel all the ingredients are here for a Guggenheim Bilbao."

Ballen, who was born in New York but has lived much of his adult life in South Africa, has exhibited widely, including at The Museum of Modern Art, New York, and at the Tate Modern in London.

In 2006 singer Elton John, whose photography collection is on show at the Tate Modern, purchased a number of Ballen's works. John's collection includes work by Ballen's hero, the Hungarian-American André Kertész.

Ballen's fluency with the ways museums and collections function partly motivated his decision to donate to the Zeitz museum.

"If you give it to a big international museum, the work sits in a storeroom," he said. But his major motivation was his connection to South Africa.

"I have lived more than half my life in South Africa. It feels appropriate to do this."

Ballen's gift to local photography occurs at a time when another important photography collection is leaving the country. David Goldblatt has cancelled his agreement with the University of Cape Town Libraries to house his archive.

Up until recently UCT Libraries kept a collection of Goldblatt's digital images, negatives, transparencies and prints, which were available to researchers.

The photographer's unhappiness with UCT vice-chancellor Max Price and his administration's handling of recent events on campus motivated Goldblatt to cancel his agreement and give his archive to Yale University.

Goldblatt is particularly unhappy about the vandalism of a #RhodesMustFall commemorative exhibition at the Centre for African Studies last year, as well as the censorship of over 70 works by the university's Artworks Task Team.

"Freedom of expression is indivisible," said Goldblatt. "It is not something that you can divide up into, this is okay, but not that."

The loss will be tangible, particularly given Goldblatt's stature. Heaping praise on her mentor, Muholi pointed to Goldblatt's selfless work in establishing the Market Photo Workshop, which since January occupies a stately new building on Mary Fitzgerald Square in Johannesburg.

"We are really indebted to him for giving us a space to express and be ourselves," said Muholi.

"Not everyone is that generous. He also did not create a space and have it named after himself. He has given so much."