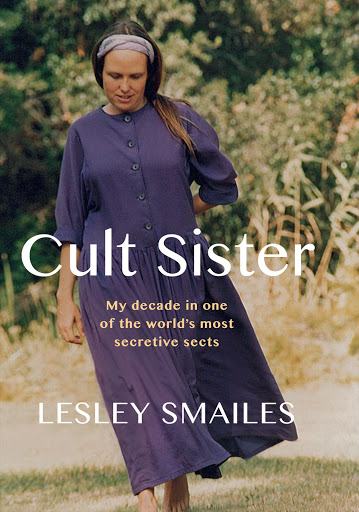 In 'Cult Sister' (Tafelberg), author Lesley Smailes (pictured) details the 10 years she spent in a secretive US cult.
Image: Supplied

After matric Lesley Smailes took a gap year to the US.

Before she left, her mother, either in jest or premonition, said: "Don't get married and don't join a cult" - words that would echo for more than a decade in a mind of a girl who became a woman while caught in the snare of what is believed to be one of the most insidious and dangerous existing cults in the US.

In Cult Sister Smailes shares the story of her life-changing 10 years spent journeying around the US as a member of this controversial religious group - living out of a backpack, having home births, living the freeman lifestyle, an arranged marriage, threats of losing her children, and surviving in strange and glorious ways.

The book is told largely through a series of letters exchanged between Smailes and her mother.

This is her true story:

I am a people person. I love the sense of belonging that comes from being part of a group, a greater whole. Community.

"You should have been an impala, you are so gregarious," my Granny Precious once told me. She was right.

So was my Nanny Goodness. With me tied to her back sitting straddled across her ponderous buttocks, she told my mom: "This one - her name is Thandabantu!" That means "the one who loves people" in isiXhosa.

My friends have always been important to me, especially when I was a teenager. We were rebels, wild and free, smoking joints, gate-crashing parties and getting sozzled at popular drinking spots. Like strands of thread on a poncho fringe, we joined our lives. What we had in common was the "jol". The high. The experience. The strangeness of growing up in our apartheid-censored country of the late 1970s and early 1980s.

Patti Smith, Talking Heads, The Cure, Rodriguez - music helped us define ourselves and make sense of our world. Sex, drugs and rock 'n' roll. Are You Experienced? Confused and full of wow-wonder, the lyrics of this Jimi Hendrix song became my personal anthem. The way I saw it, rules were there to be broken.

Even now at age 52, though wiser and more circumspect, I am still an unconventional, boundary-pushing person. This has sometimes landed me in a whole lot of trouble, but it has also opened the door for some incredible adventures, leaving me with my abundance of stories.

This one has been painful to remember. How do I explain that for 10 long years I was a member of one of America's most conservative and secretive cults? That for most of the 1980s I dropped out of the world, changed the way I dressed and spoke, bought into a system of beliefs in which women are completely subservient, married a man I barely knew and had three children with him - all of this while crisscrossing the US, camping in the woods or squatting in unoccupied buildings that often had no electricity and running water, and eating food from garbage bins.

I know it sounds crazy, but I did it. For a whole decade I turned my back on almost everything I knew to be part of a religious group in which adherents spurned almost all modern comforts and behaved as though they lived in olden times.

We did not have an official title, although we referred to ourselves as "The Church" or "The Brothers". Others called us "The Bicycle Christians", "The Jim Roberts Group", "The Brethren" and some "The Raincoat People", probably because of the long garments the Brothers wore.

The less imaginative called us names like ''The Dumpster Divers" and ''The Garbage Eaters".

Many people would be revolted at the thought of eating ''rubbish", but to be fair the items we procured were generally more than edible and I can't say I lacked for sustenance.

Nor was I made ill by any of it in my years of scavenging for what was freely available. In fact, I reckon I probably ate better than the average American.