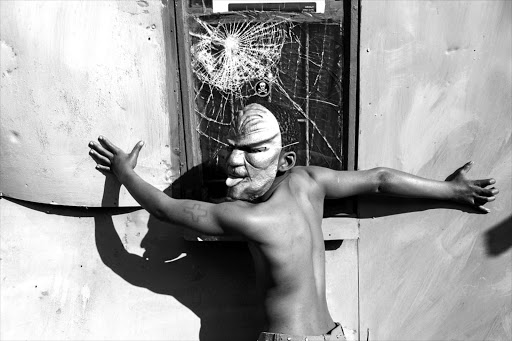 A selection of works from various photographs will be included in the 'East Rand' exhibition.
Image: Supplied

For some time, photographer Marc Shoul has been interested in alternative ways of showing images and presenting photography "beyond the gallery".

A few years ago he hung photographs he'd taken of dog walkers in the northern suburbs of Johannesburg on street poles near where he'd photographed them.

He's become fascinated by the growing trend for screening photographs in public places and has attended such public projections at photography festivals around the world.

"It's quick, you get to see a lot and it's fun," he says. "It's interesting to see how other people react to the images as they roll."

On Saturday Shoul, with art consultant, curator and journalist Matthew Krouse, will be showing a photographic screening of images of the East Rand/Ekurhuleni at the Casablanca Roadhouse in Brakpan.

One of Shoul's main impulses is to democratise the medium of photography. The immediacy of documentary photography, he finds, is particularly well suited to public spaces because it's already such a public medium. Many of the images he's showing "were taken on the street, and it's great that they're being shown on the street as well," he says.

Shoul took photographs in Brakpan between 2008 and 2012. He was drawn to the town after he documented the last weeks of the Boswell Wilkie Circus - and Brakpan was one of its last stops.

"I was interested in the transparency of the town," he says. This sparked a broader curiosity to explore and photograph other parts of the East Rand.

Shoul's selection of images for Roadhouse, which includes seven other photographers' work as well as his own, represents the East Rand "from various directions" from the 1960s to the present.

David Goldblatt has contributed images from In Boksburg, published in the early 1980s, which remains one of the most significant portraits of the bureaucratised apartheid dream of an ordered, ideal life, which embodied a kind of prosperity "that was going to sustain itself independently of the opinion around it", as Krouse puts it.

"I think the cherry on the top of the show is the Ngilima body of work," says Shoul. This recently rediscovered archive of studio images consists of formal portrait photographs and images taken by father and son Ronald and Torrance Ngilima in the Benoni Old Location and Wattville township between the 1940s and 1960s, "looking at the black community and its leisure", Krouse says.

It's a rare and interesting representation of East Rand life because it shows "the apartheid life of South Africa outside of the anti-apartheid lens. It's really photography by people for people."

Shoul's own body of work bridges these representations of the past and a new generation of photographers documenting township life: works by Lindokuhle Sobekwa of Phola Park in Thokoza, and Sibusiso Bheka, concentrating on Thokoza at night, and Raymond Mokoena's pictures of the 1960s Chevrolets that were used as taxis in Daveyton. Jabulani Dhlamini, who heads the group Of Soul and Joy, to which photographers Bheka and Sobekwa belong, is a slight departure, with images of witnesses and survivors of the Sharpeville massacre.

Perhaps what is most interesting about the show is Shoul's insistence that the images and the show are "essentially for the people of Brakpan".

"What's important about this is that it's an inclusive event, because I'm hoping that some of them will come and see what I did there," he says.

Along with its accessibility, documentary photography can err on the side of the spectacular and voyeuristic, but a decision to show them like this is profoundly respectful of the images' subjects.

"I know from the past that some of the people of Brakpan don't like the work that I've done there," says Shoul. But he believes they're entitled to their views. What's more important is people's responses.

•This article was originally published in The Times.