Why weekend warriors are paying for pain 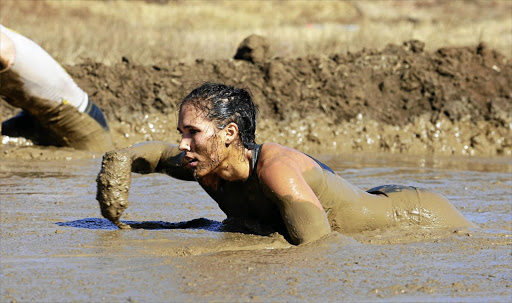 Hanneke Dannhauser is the queen of obstacle-course racing. She recaptured the women's Black Ops title last month after recovering from an injury.
Image: LOUIS HUGO

To escape stress and a sedentary office life, professionals are paying for the pain of doing obstacle races, whose popularity is growing rapidly.

"They allow us to understand pain and see how strong and resilient we are," said grandfather "Warrior Ric" Ricardo Gressel, 52, who has finished 34 Warrior events, South Africa's biggest obstacle race series.

In a new study, Rebecca Scott from Cardiff University and Julien Cayla from Nanyang Technological University in Singapore investigated why people pay for the pain of becoming "mudders".

Scott did two Tough Mudders, lived with mudders for months, volunteered at races on three continents and sported huge bruises after races.

In field notes, she wrote: "I slide ... into deep, freezing muddy water with ice cubes dancing around on the surface. My body retreats into a numb shock. Then suddenly it all hits me.

"My head experiences a slow-release throb of pain ... My legs that were once working with my mind — moving forwards to get me out of the ice dumpster — are now frigid."

Pain does not deter racers, Scott found. Instead, it allows white-collar workers to focus on their bodies and intense sensations, shattering the self-awareness, demands and anxieties of modern life.

"Most of the obstacles are hedonic but there are a handful where the pain is a salient part of the experience," she said. "It takes people away from routines and certainties."

The Mudder is unpredictable, with entrants risking injuries such as spinal damage and even strokes, heart attacks and death, the report in the Journal of Consumer Research notes.

In a documentary, Rise of the Sufferfests, Californian obstacle racer Scott Keneally says seven million people take part in about 4,000 obstacle races a year, looking for an antidote to a tame urban existence in which they are more likely to pick up paper cuts than scars.

The Warrior, one of six types of obstacle races in South Africa, has been a hit since the first event in 2013, when it attracted a sell-out 5,000 entrants.

Hanneke Dannhauser, 28, who has won the hardest Warrior category, Black Ops, 16 times, said: "Pain comes with the territory, legs burning, arms pumped, but it is only temporary. The more the pain, the more memorable the event and the bigger the sense of achievement."

She fell badly late last year but this did not slow her down.

Scott found that participants talked about facing the pain as cathartic and spurring personal growth.

"During the event, extreme pain leads to a state of confusion.

"After the event, participants still feel the pain of sore muscles, but they also expend significant resources in narrating their pain, using pictures of wounds and scars to share their experience with others."

Cayla was struck by the extent to which competitors shared their pain and said the success of the Mudder coincided with the rise of social media and creating the image of a fulfilled life.

Scott said: "For some mudders it was about facing fears, like the claustrophobia of crawling through a tight mud tunnel in the pitch black."

The Merchants Zulu Warriors, from Change A Life Academy in KwaZulu-Natal, have progressed from being a team who could not finish the Black Ops course to taking top places.

Team captain Kwanda Mhlophe said: "Our first race was very tough because we never knew what to expect. We were pushing the limits and beyond, and hanging in there to finish. We felt the pain but did not get too many serious injuries."

His team of 10 are elite athletes — many having earned silver medals in the Dusi Canoe Marathon — but they needed technical training to be competitive.

Black Ops male champion Claude Eksteen coached and allowed them to train on his obstacle course.

In less than a year they all finished and Hlelani Radebe finished second overall in one race and fifth in another.

The founder of Change A Life, champion athlete Martin Dreyer, said: "Obstacle races are a unique challenge, exercise in its rawest form. Cardio fitness and being the king of pull-ups are not enough."

South Africans like outdoor challenges and obstacle racing would get bigger, said Pienaar.