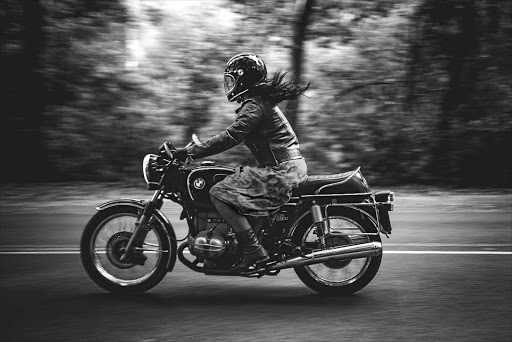 "Riding a bike is like an art - something you do because you feel something inside," MotoGP champion Valentino Rossi once said.

Anyone who has ever swung a leg over a saddle, turned the throttle and pulled off into the headwind will testify to the euphoria that comes with riding a motorcycle.

The cool factor, fuel efficiency, practicality and lower carbon footprint are clear incentives for the two-wheeler tribe, but the dominant emotion at play for a rider is pure exhilaration and a sense of unbridled freedom - and women want this.

Women bikers are on the rise. They've long shown their competitive mettle at gigs, such as the Dakar and MotoGP, but increasingly the fairer sex wants a proper multi-functional bike with which to commute, socialise and explore - and they're swiping the plastic for serious machines at equally serious prices.

Café racers, roadsters, classics, scramblers and cruisers are eyed with intent over scooters and mopeds, a move that has not gone unnoticed by the big brands that are now catering more often to smaller riders and tailoring their ad campaigns to entice them.

Traditionally a male-dominated scene, motorcycle clubs and organisations are embracing this new breed of bikers rolling in with a fresh feminine style that differs from the denim-clad pillion riders and Hell's Angels' groupies many people associate with women on motorbikes.

Designers, account managers, ballerinas and chefs are zipping up expensive leather jackets, flipping down their visors and accelerating through urban congestion and onto the wide open road, showcasing a classier look and shattering the misconceptions caused by the over-sexualised biker-chick imagery that has prevailed in cheap magazines and tacky calendars for decades.

Claudia Liebenberg, 29, a full-time illustrator based in Stellenbosch who'll be exhibiting her art in Belarus later this month, has been around motorbikes since she was little, first riding with her father and then on scramblers in high school. At age 14 she rode solo for the first time - fast-forward 25 years and she finds herself the owner of a classic black 1976 BMW R75/6, a make and model she has coveted for the longest time, lured by its timeless look, war history, horizontally opposed engine design and the ''beautiful rough sound it makes", clearly music to any petrol-head's ears.

Anushia Moodliar, 53, rides socially with friends on her Harley Heritage Softail and has been biking seriously since 2009, relishing the peace that prevails on the move - "it's my chance for introspection, reflection and prayer".

Rookie Emma Jude Jackson, 32, a social media strategist, recalls the overwhelming thrill she felt as a child at Hartbeespoort Dam in Joburg as 50 Harley Davidsons would rumble past, leaving the air vibrating in their wake and her heart beating a little faster.

Riding just once in 2016 as Jason the Baker's passenger had her setting new goals, and six months and several lessons later she was climbing onto her own Suzuki RV125 VanVan, the perfect entry-level bike that the team at Los Muertos in Loop Street, Cape Town, helped her source.

Riding alone is her vibe - "it's become a form of therapy and escapism for me, where I can be completely in the moment".

Sanela Bozic, 34, a luxury property specialist, started out on a scooter in Miami in 2008 and two years ago learnt to ride geared motorbikes.

Influenced by her fiancé Devin Paisley of Woodstock Moto Co, a DIY workshop and coffee hang-out in Barron Street, Cape Town, Bozic says that riding in the city makes her ''feel like a ninja", as if she's in a video game.

She's on her Honda XR250 Tornado Scrambler at every opportunity, a no brainer in the perpetual CBD gridlock.

Bozic, who likes to push the speedometer needle, is extremely safety conscious and emphasises that the right apparel is crucial as riders are so vulnerable and always at risk. "Seeing people riding without the right gear gives me the shivers - one should spend 10% of the value of the bike on a helmet - protect your melon!"

• On Saturday, May  6, hundreds of female riders will ride in solidarity with those in 20 other countries for International Female Ride Day, the world's only globally synchronised women's motorcycle event, celebrating women's empowerment and the joy of the ride. For more info visit ladybikerssa.co.za