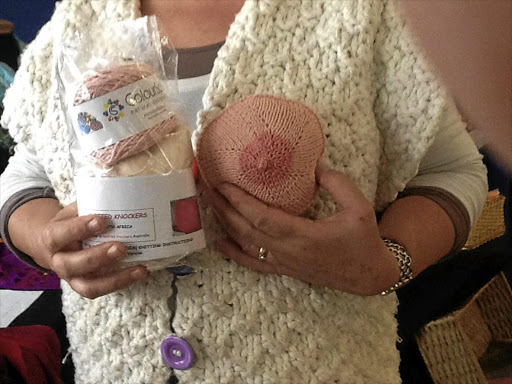 Knitted knockers are stuffed with natural fibres so they are light, washable and comfortable.
Image: Knitted Knockers South Africa/Facebook

Take knitting needles and cotton yarn; add a pair of patient hands and a big heart. This is the pattern for a global knitting revolution transforming the lives of mastectomy survivors, including those in South Africa.

Knitted knockers are handmade breast prosthetics. It started in the US when breast cancer survivor Barbara Demorest was told she couldn't have reconstructive surgery. She also couldn't use conventional silicone prostheses until six weeks after surgery.

Her doctor's consolation was a knitting pattern for a breast.

A friend of Demorest's got busy knitting and by the end of the week she had a set of prosthetic boobs that meant she could stop hiding behind big jackets, feeling like she couldn't show herself to the world.

The prostheses are knitted and stuffed with natural fibres so they're light, breathable, washable, non-irritating to new scars, adjustable in size and are way cheaper than silicone or rubber prostheses.

Knitted Knockers spread to South Africa when Dana Biddle, an avid knitter and owner of a business called Colourstun that dyes natural yarns and wool, met Ruth Archer at a fundraiser for a quilting event three years ago.

The women became friends. Weeks after they met Archer, called Biddle telling her about a pair of knitted knockers her sister in Australia had sent over for their mom. It was a no-brainer. They knew they had to knit them for local women.

"We settled on the Australian pattern that works best for our climate and sizes," says Biddle.

Biddle and Archer made a few of the prostheses and put them on display at the quilt festival. Interest was enormous. Sadly, someone always knows someone affected by breast cancer.

In the US one in eight women will be diagnosed with breast cancer in her lifetime. In South Africa the Department of Health says breast cancer is on the rise.

Biddle set about making knitting kits consisting of the pattern, cotton yarn and merino wool stuffing. She sent them to yarn stores around the country asking contacts to stock and sell them.

"At R50 the kits are sold at cost and proceeds go back to making more kits. No knitted knocker is sold, they are gifted," says Biddle.

Biddle and Archer established groups of volunteers knitting knockers in all kinds of shades and sizes.

"We have women of all walks of life - from those at the Helen Joseph breast clinic to top private hospitals needing and preferring the knitted knockers," says Biddle.

For Etheline van Vuuren the knitted knockers she received changed her life. Van Vuuren had a mastectomy more than 10 years ago and had three sets of rubber prostheses during that time.

"The rubber ones were heavy. They made me sweaty and I needed a special bra; they were just an inconvenience.

"Two years ago a friend knitted a pair of knitted knockers for me and they're wonderful. They are a labour of love, often made by an anonymous volunteer.

"After going through something like surviving breast cancer to receive something handmade, soft and lovely makes you feel so good.

"We need people to know about this fabulous option that works perfectly and is made with so much love and kindness," says Van Vuuren.

• For more information on the Knitted Knockers initiative visit knittedknockers.co.za