South Africans splash out thousands on parties for their pooches 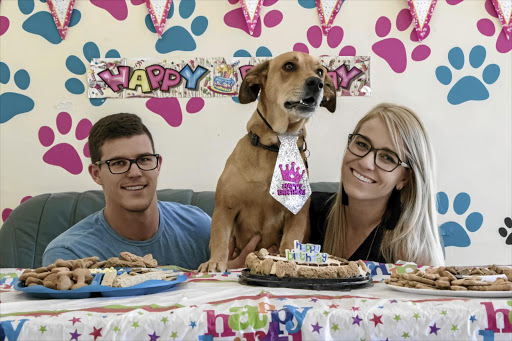 Daisy turned three last week. Custom invitations to her party at a venue in Johannesburg went out last month.

Her parents helped her blow out the candles as her guests sang Happy Birthday.

Her friends played party games, ate cupcakes and posed for photographs before leaving with a party pack.

Daisy is a 2.4kg Yorkshire terrier. She is one of hundreds of dogs pampered by their owners who are celebrating their fur babies' birthdays with cakes, puppy cupcakes and biscuits, as well as event planners, hired venues, professional photography and themed decorations.

"Think of a children's birthday party. There will be balloons, party decorations, snacks for dogs and humans. The birthday boy or girl will get a personalised birthday banner. All the dogs get party hats. Each dog gets a party pack with treats," Your Dog's Party planner Gené Viljoen said.

Parties can cost up to R2,500 for a two-hour celebration.

"People are baffled why some would want to spend money on their pets, but there is a market for it.

"Delaying getting married or having children is now a trend; a lot of young people have fur babies before they have real babies and they want to celebrate them," Viljoen said.

The Puppy Palace Doggy Daycare and Spa in Parkmore, Johannesburg, had barely opened in October when a "fur parent" inquired about a birthday party for his pooch.

"Our first party was an experiment, but [things] took off after photographs and videos were posted on social media," co-owner Carla Rubin said.

Parties are over the top - but the pooches deserved it, she said.

"It's almost as if the birthday dogs know it's their birthdays. They look like they are grinning from ear to ear."

The liver, chicken, vegetable, honey and peanut butter cake made by Laura Whittaker of Happy Tails Doggy Daycare has become a hit and often owners have to hold back their dogs from devouring it.

"We make these cakes because a lot of people see their dogs as their children and want to celebrate their loved one's life."

Happy Tails gives complimentary pooch parties to their clients who donate dog food or cash to PETS JHB, which look after township dogs.

Cape Town canine owners celebrate their pooches by sipping champagne on dog-friendly beaches while their furry friends run around.

"Dog owners do send treats for staff and dogs at dog daycare centres, but the trend here is to have a celebration on the beach because our environment is dog friendly," said Yanic Klue, the founder of atFrits Dog Hotel & Daycare Centre.

"In Cape Town dogs are celebrated every day because our dogs are very spoilt."

However, party animals do check into atFrits - the city's first five-star dog hotel - as dog parents frequently treat the staff and pooches on their fur baby's special day.

Presheen Ramdhani, a retired teacher from Durban, began celebrating her dogs' birthdays with home-made cakes and "parties" around the dinner table to educate her children on the importance of valuing their pet's life - and has continued doing so even though her children are now adults.

This year she posted a photograph of the party on Facebook.

"Got balloons, a banner, party hats, baked a chicken and bacon cake, and invited the neighbourhood humans and their fur kids," Peters said.

"Heston loved every second of it, but I was criticised heavily for treating him like a child.

"Being a 35-year-old childless woman, many assume, and have told me, that I am compensating by trying to fill my childless void with the love I have for Heston. I do not judge people when they want to have children, or how they raise them, therefore I cannot understand why I am being judged for choosing to love a pure, innocent animal," she said.