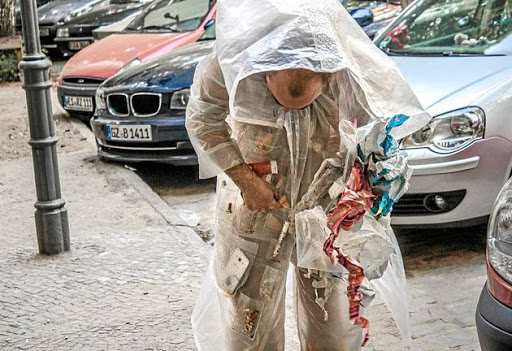 A still from the video performance of Kai Lossgott in his 'Hunter-gatherer' suit, collecting urban detritus for future categorisation.
Image: Supplied

The Svalbard Global Seed Vault in Norway was designed as an impregnable deep freeze to protect the world's most precious seeds from global disasters and ensure humanity's food supply. Last week it flooded due to permafrost melting caused by global warming.

The seeds were unharmed, but the breach highlighted an irony of the precautions taken - that the greatest threat to us as a species is not some freak or external natural disaster, but something entirely self-inflicted.

It's an uncanny coincidence that Kai Lossgott's solo exhibition, Hunter-gatherer, on at the Absa Gallery in Joburg until June 15, responds to this event and the conditions that precipitated it.

It poses the question: what does it mean to be alive in an age in which human activity is a significant determinant of environment and climate change?

Before winning the Absa L'Atelier award in 2015, Lossgott's practice was performance-based and ephemeral. For this exhibition he's filled the gallery with objects (rubbish to be precise) - artefacts of his excavations and investigations into human behaviour.

The central and titular work in the exhibition is Hunter-gatherer, a clear plastic, hooded suit with multiple pockets that hangs like a skin inside the entrance of the gallery. Lossgott describes it as Afro-futuristic and "something that our Paleolithic ancestors could have worn as an imaginary technology, a way to make behaviour visible".

In a video performance we see Losgott roaming city streets, collecting discarded objects and urban detritus into the pockets of the suit for future categorisation. Playing a modern-day hunter-gatherer, Lossgott sifts through waste looking for clues as to what it means to be human in this age.

"The suit can be understood as a metaphor for memory, an archive, or a wearable museum of the unacknowledged and ignored within the everyday," he says.

Cigarette butts, pieces of plastic, paper, matches, bottle caps, string, seeds and other indeterminate items are arranged by kind, colour or pattern into precise framed displays, installations and video works - presented as art works in the gallery context, but read more as artefacts of our collective lives.

Alongside these are other works that echo with the traces of discarded material objects - a series of ghostly black and silver collagraphs printed from flattened plastic and cardboard packaging, and photographs of roadkill exposed onto flattened silver foil wrappers. These art works map out a semiotics of use and waste, of meaning and the lack thereof.

"We define things by what they are not," he says. ''I'm interested in why objects even exist and the notion of the inner symbolic world and the images that give us meaning. We piece together our identity and our lives through these things that we create.

"I'm interested in the ones that are abandoned or don't fit our use for them. 'Use' is a key word. The anthropocentric is defined by utilitarianism for human gain. The opposite is the appreciation of all things for their intrinsic worth."

Hunter-gatherer pivots around a three-part ecosystem of contemporary consumer culture: the supermarket, where products are presented for consumption; the dump, where what's no longer useful is discarded; and the anthropological museum, where fragments of the past are analysed, categorised and displayed for another form of consumption.

"When you start to arrange things it's the same format in a supermarket and a museum; it's the modernist grid," Lossgott says.

"This format helps us to think about and compare things to each other. When objects are in the same position we can analyse them and account for them and begin to understand them, whereas the dump is overwhelming; we can't make sense of it visually."

Through the act of sorting discarded objects and creating taxonomies, Lossgott examines the creation of meaning and - with the placing of the displays in a cultural institution - systems of knowledge, and how value is assigned to objects. But stripped of the context, the things are arbitrary - a parody of order.

"We live in the time of climate change and overwhelming disaster that's beyond the scope of human understanding and beyond our emotional capacity to process what it even might mean for us as a species," Lossgott says. "We live in a time of 'overwhelm'."

•This article was originally published in The Times.