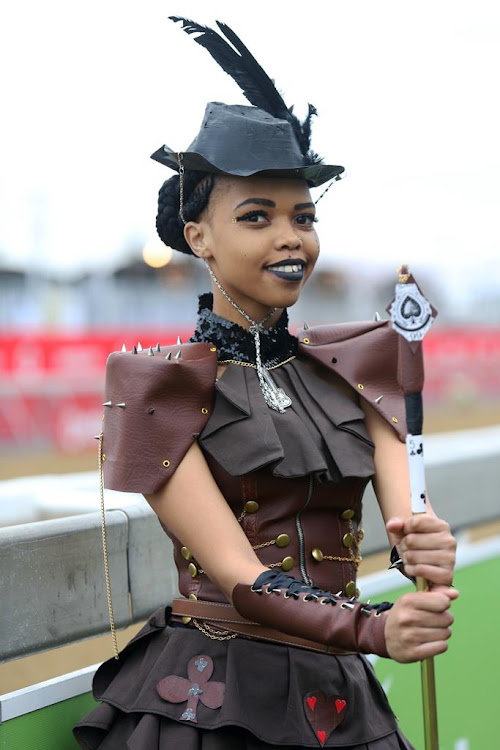 Nokwanda Zmane in a Amanda Ndovu design at the 2016 Durban July. The theme was 'Leader of the Pack'.
Image: Jackie Clausen

1) In 1957 excited women punters threw their hats into the air when Migraine‚ the only filly in the race‚ scored by a long head. Several women fainted and some were so overcome with emotion that they flopped down on the grass and stayed there until the payout windows opened.

2) In 1977 there was a stir in the winner's enclosure after Lightning Shot was led in‚ when a woman in a transparent silver outfit embraced the horse and had to be led away. She was later taken to Addington Hospital with a severe rash as she was allergic to horses!

3) In 1981 the Durban Turf Club imposed a ban on jeans which contributed to the higher standard of dress‚ although there were still those who decided to shed almost all for the raceday crowds and cameras.

4) In 1982 a Free State woman had a dream on the Monday preceding the race that the grey Jamaican Rumba would win. She went on a betting spree which resulted in her netting R250‚000 in total. - TimesLIVE

It's not a fancy dress party! What NOT to wear to the Durban July

The Vodacom Durban July is taking place this weekend, so if you’re planning to go – or to celebrity stalk on social media after the fact – be sure to ...
Lifestyle
4 years ago