New Doornfontein, Lorentzville and Ellis Park are experiencing an exciting rejuvenation with an influx of creative new businesses 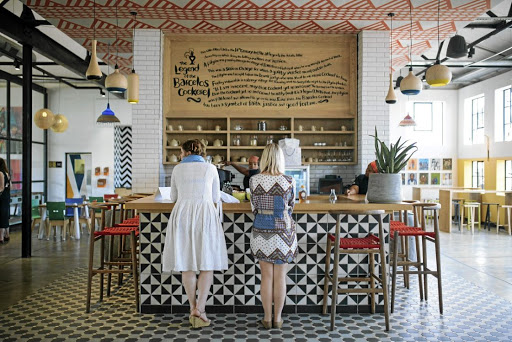 New Doornfontein, Lorentzville and Ellis Park in Joburg east have never been posh, but over the last decade or two have become downright grotty.

In the last few years, however, a rejuvenation has taken root in small pockets of these suburbs. And key to its success is the idea of "small pockets" of development. It's allowed organic renewal that is less hipster onslaught and more integration with existing communities. It holds the promise of upliftment, rather than pushing impoverished people deeper into the margins.

The anchor in the area is Central Kitchen, Nando's global head office in Victoria Street, Lorentzville. Its campus is filled with art, water features, party decks and even has an in-house radio station. Nando's has bought and flattened some homes for parking, but many of its neighbours remain working-class people living in modest, crumbling houses.

The Johannesburg Development Agency called Nando's commitment to locate here "fearless, down to earth and ambitious - much like the average Jozi citizen".

Pizza a la awesome view is how I'd sum up a meal at Treviso Café, writes Ufrieda Ho
Lifestyle
5 years ago

Across the road is Victoria Yards. It's 30,000m² of industrial space that developer Brian Green calls a dream project. He envisages studios, community food gardens and artisanal product producers. He plans indoor climbing walls, dance studios and community centres too.

"We are businessmen looking for viable returns, but we want to show people dignity by developing their skills and building facilities that aren't exclusive," says Green.

Blocks away along in Frere Road are artists' studios alongside the revamped Prophouse - a wonderland of Elvis dolls, dinosaurs and everything in between. Prophouse is also a party spot with a rooftop bar and event space. 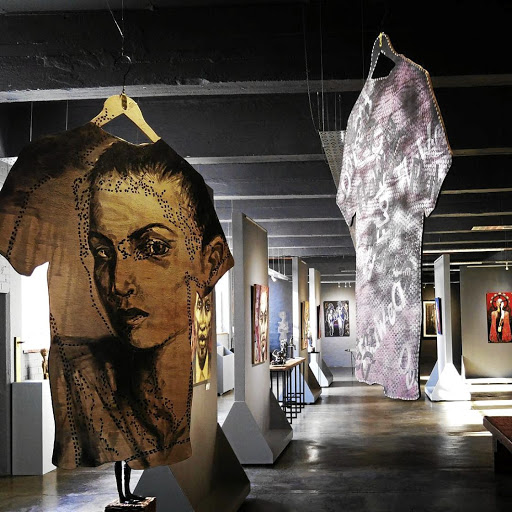 On Lorentzville's border is New Doornfontein where buildings such as Ellis House and Morkel House on Voorhout Street have become home to creatives choosing cheaper rent and taking the opportunity to re-imagine urban dereliction.

Neil Nieuwoudt of Dead Bunny Society, a collective of artists and curators, says initially they thought their space was best suited for storage. Soon it became obvious it was perfect for inspired living and creating too.

For Sanele Manqele of Art Eye gallery, their new home is a 180° turn from their previous northern suburbs, mall-styled location. Here on the industrial fringe of the inner city, Manqele says they're closer to their vision of being a platform for expression and storytelling.

"Our artists are expressing narratives directly focused on what it means to live in South Africa today," she says.

Manqele acknowledges they've had to tick boxes for security and safety. But, as she says: "People visit here and nothing bad happens, so they come back, and they bring friends too." 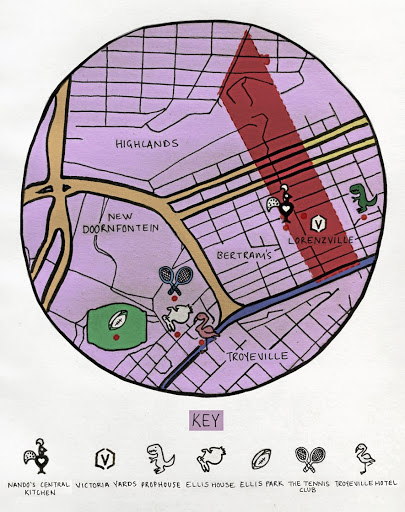 ALSO IN THE AREA

Although this stadium is now called Emirates Airline Park, it's popularly known by its old name Ellis Park. Constructed in 1928, it was originally named after Mr J.D. Ellis, who donated the land for it to be built. It’s home to rugby's Golden Lions, but is also a major venue for events like international soccer matches and concerts.

Ellis Park’s original tennis club has been taken over by art aficionados MJ Turpin and Matthew Dean, who've transformed it into the city's biggest alternative party venue. The once unloved space has been spruced up a bit and now boasts a couple of murals by up-and-coming artists like Alice Edy. Sunday afternoons is when the club really comes alive with DJ’s spinning tunes as hipsters play tennis on the courts.

First licensed in 1939, this down-to-earth hotel and restaurant has been the hangout of artists, musicians, political activists and sports fans for generations. The restaurant, which serves unfussy Portuguese cuisine, often features in lists of Joburg's best places to eat. The hotel also hosts regular book evenings attracting everyone from strip club owners to cabinet ministers.

This inner-city farm first sprung up on the grounds of unused bowling greens in 2006. Today you'll spot the hothouses from the street and maybe some of the scarecrows too.

It’s a City of Johannesburg initiative, but is driven by individual farmers who work as a co-operative to tend to the organic gardens and produce vegetables to feed local communities.

The project has business legs too: the farm is open to the public and supplies top food markets, small retailers and restaurants across the city. It's well worth a visit to pick up your weekly veggie supplies.

Drive slowly on Bertrams Road so you don’t miss one of the city’s public art gems: a mosaic by Andrew Lindsay commemorating the 1922 Miners Strike.

The mosaic is a tribute to those who toiled underground to make Joburg the City of Gold; it also serves as a marker to take note of a row of historic miners houses, which were refurbished in 2010 for the Soccer World Cup.