Movie Review: Sci-fi romp 'Valerian' is a reminder that films should be fun 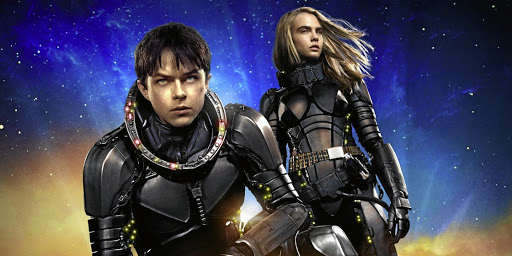 The first foray back into sci-fi for French Cinèma du look director Luc Besson comes with a long title and a large budget - it's the most expensive film ever made in Europe.

Based on seminal 1960s French comic book series Valerian et Laureline, Valerian and the City of a Thousand Planets is a passion project for Bresson who's been waiting for the technological advancements necessary to bring the world of the series, with its thousands of planets and aliens, to the screen.

French comics with their oddball sense of humour and quirkiness have had a significant influence on much of Besson's work, which mixes high-octane action with off-the-wall antics and characters.

Besson, often dismissed by the haughty critics of his homeland as a mainstream director, is a personable, modest man who loves popular culture movies. While his new film doesn't always hold up as far as plot and characters are concerned, there's certainly a lot of fun and love for the story that flickers from every frame.

Movie review: 'The Mummy' is heavy on supernatural action, light on plot

Shot at Besson's Les Studio de Paris, the world of Valerian is spectacularly colourful and full of light.

The film opens on the luminous multicoloured planet of Mül where the lithe tribal locals survive off the energy drawn from pearls - transferred thanks to alien creatures who can take a pearl and poop it into thousands of pearls.

The Shangri-La of Mül is soon interrupted by intergalactic warships crashing from the sky - the gods, or whoever are responsible, must be crazy.

Jump through time and across the galaxies and we are introduced to our heroes - Major Valerian (Dane DeHaan) and Lieutenant Laureline (Cara Delevingne). Valerian is, in a very un-French stereotype show of love, willing to give up his interplanetary womanising if only Laureline will give him her hand. For now, they engage in flirtatious banter as they embark on spy missions in the service of the future of the galaxy, with futuristic guns and other toys.

To cut an overly complex plot short, the future of the centuries-old peaceful planetary conglomeration of the City of a Thousand Planets will soon depend on the duo and launch them on a journey through its various worlds including an interaction with an exuberant intergalactic pimp (Ethan Hawke) and a shape-shifting pleasure alien (Rihanna).

DeHaan and Delevingne may be Besson's ideal physical incarnations of the characters he idolised in childhood but they don't really have the performance chops or chemistry to carry the film. While a little too much of the story and execution is childish, there's no denying the evident enjoyment that the director had in creating this zany world.

It may not change the haughty critics' view of him but Besson reminds us that sometimes the point of going to the movies is just to have fun, let our imaginations run riot and revel in the pleasures of silliness.

WHAT OTHER CRITICS SAY