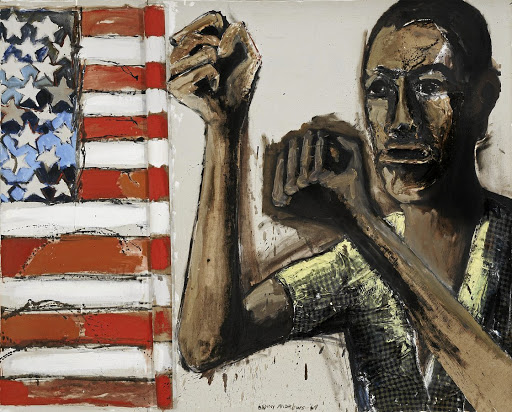 Benny Andrews' 'Did the Bear Sit Under a Tree?'
Image: Supplied

The Sixties was the heroic age of African-American politics, producing movements and concepts whose implications have reverberated through the world ever since: Civil rights, black power, the Black Panthers.

The current Black Lives Matter campaign refers directly back to the triumphs and tragedies of that time. This suggests the Tate's new blockbuster exhibition on Art in the Age of Black Power won't be just another show of quirky Sixties stuff, but a massing of images and ideas that are still powerfully relevant today.

Face yourself: The many faces of Zanele Muholi

Where an earlier generation of African-American artists were marginalised by an art world that was, the show argues, systemically racist, the new generation were determined to fight their way in "by all means necessary", to paraphrase Malcolm X.

The initial impression of the show is of a bewildering array of groups and movements with often wildly divergent ideas about what a "black aesthetic" should be, or if there should even be one; whether art should be "about change", such as the mural projects of the Chicago-based Organisation of Black American Culture, or if it should embody "actual change", as seen in the abstract murals of Harlem's Smokehouse Associates.

While the show includes sections on Black Panther posters and powerful street photography with images of marches and riots, the fact that artists have chosen, by and large, not to focus on politics perhaps reflects a common cause, with artist Barkley Hendricks's assertion: "I wasn't interested in speaking for all black folks (but in trying) to be as good a painter as I could be." - The Daily Telegraph

• The show is on at The Tate, London until October. Visit tate.org.uk