In this article from our archives, Johnny Clegg tells Tymon Smith how he found himself by following his guitar into an African world 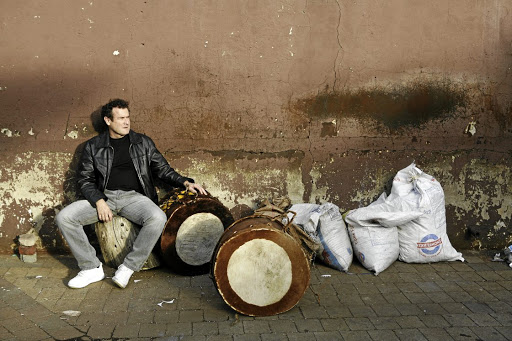 SA icon Johnny Clegg has died at the age of 66. In this article from our archives, the singer-songwriter talks to Tymon Smith about his farewell tour and how, after discovering Zulu music, he realised he "could be an African in a very real way":

As the madeleine was to Proust so is the music of Johnny Clegg to me. One chorus of Scatterlings of Africa and I am seven again, vigorously doing my best impression of the White Zulu's dance moves across our lounge in Broederstroom, where I mistakenly believe we are, as the song says, not far from "Pelindaba, where the world began." It turns out the song actually refers to Phelamanga, a fictional place, loosely translated as "place at the end of lies".

In these moments of abandon and idol imitation I'm living a secret life, far from the oppressive Calvinism and racism of my Broederbond-run primary school. All through primary school there will be no greater musical influence on my life than Clegg, from 1980's Universal Men through to 1993's Heat, Dust and Dreams.

By the time I was the age that Clegg had been when he discovered Zulu music - which, he tells me, enabled him "to discover myself ... and start to define myself and my own identity and give me a sense that I could be an African in a very real way" - I was on my way to teenage rebellion, grunge and trip-hop, my childhood Clegg obsession forgotten.

So it was with trepidation that I found myself standing outside the Teatro at Montecasino as the mostly white audience began to arrive for what could be their last opportunity to see Clegg, now 64, perform live.

• Clegg has sold over 5 million records.

• He's been made a Chevalier des Arts et des Lettres in France and has an OBE.

• He was born in England and raised in Zim before moving to SA at the age of seven.

His health is not what it used to be; he was diagnosed with cancer in 2015, and while it's in remission, his years of high kicking and stick fighting have not been kind to his hips and knees.

'WE LOVE YOU, JOHNNY'

Clegg's mother was a jazz cabaret singer, who would answer the knocks of her musician friends in Yeoville at 3am, make them eggs and listen to their noisy complaints, much to her son's annoyance.

His farewell show is a kind of cabaret; a personal journey through the events of his life, surrounded by his band, dancers, the Soweto Gospel Choir, his old Juluka partner Sipho Mchunu and his son Jessie.

There are stories and jokes that have the audience shouting "We love you, Johnny," when they're not saying stupid things like "Stop talking and dance."

By the time it all ends with a rollicking set of hits like Spirit of the Great Heart, Impi, Scatterlings, Asimbonga and December African Rain, it's hard not to acknowledge that whatever your thoughts about Clegg's music in the age of Rhodes Must Fall and twars about cultural appropriation, he certainly knows how to entertain.

A few days later I'm sitting across from Clegg in the offices of his manager Roddy Quinn, a pile of Juluka records on the table.

"I hacked my own way and my own road," Clegg says, when I ask whether it bothered him that in the '80s, the counterculture crew who listened to James Phillips and hung out at Jamesons regarded him as uncool.

"I was called a crypto-tribalist by the Left. I was promoting tribal values in a time that we should be promoting universal, counterculture values ... But I was inside a migrant culture and I was living it and I was dressing it and I was eating it. I was a complete devotee. There was something that they knew about life that my people didn't know."

WATCH | The music video for 'Scatterlings of Africa'

There was a secret flow of people and movement and ideas and music, and it was under the surface of apartheid South Africa, and we slipped into that slipstream

Because Juluka was racially mixed, Clegg and Mchunu could initially only play private venues during the apartheid years. For most of their time together, the duo worked their day jobs - Clegg as a lecturer in the department of social anthropology at the University of the Witwatersrand and Mchunu as a gardener - playing townships at night and later touring university campuses.

"We were pretty street smart and sussed and we understood the world we lived in," Clegg says. "We were idealists but we were not trapped by the idea that the society was fixed. We found that there was a secret flow of people and movement and ideas and music, and it was under the surface of apartheid South Africa, and we slipped into that slipstream."

In 1982 Juluka released Scatterlings of Africa , which made the top 50 charts in the UK. If it wasn't for this, "I would still be making music on the side and lecturing - it's as simple as that dude," Clegg says.

By the time Mchunu left and Clegg went on to form the more political and pop-influenced Savuka, he was outselling Madonna and Michael Jackson in France.

In spite of this success he was not invited to play the first Wembley concert in honour of Nelson Mandela in 1988 (although he did perform at the second one in 1990). The cadres in charge of the cultural boycott told him "that Juluka was confusing, because how can a black and white band come from South Africa?"

Soon Clegg will head off to tell his stories and pull out the few kicks he still can for his fans overseas. These shows are a way to "help make sense of my life", he says.

"As I perform I'm making connections again with the life-changing moments that shaped me and my music."

I wanted to become like an African blues guitarist because this was my culture and I wanted to belong to it and it was a selfish thing, it wasn't political

He's working on a new album and an autobiography.

"I've just done what I've done but when I look back there was a wake behind me which was a cultural shift," Clegg says.

"People say, 'Gee you guys were clever,' but to be honest we were just buddies; I loved guitar music, I thought it was so great, and I wanted to become like an African blues guitarist because this was my culture and I wanted to belong to it and it was a selfish thing, it wasn't political.

"It was to define who I was - I wanted to be African, I wanted to be Zulu. I didn't think that I was going to do this and in 20 years' time be celebrated as some sort of cultural missionary."