Artist Jan Tshikhuthula is driven by his generation's collective energy

"It's my peers who push me," says this young artist, whose landscapes capture the details of where he’s come from and where he’s going to 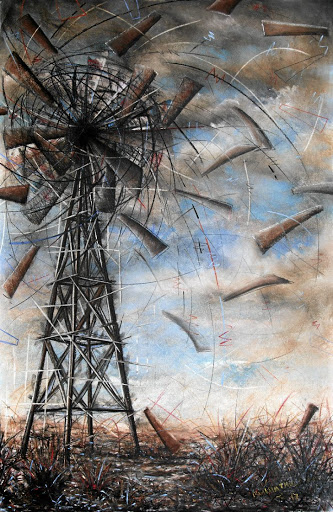 The journey to the city is an archetypal South African story. Rooted in forced migrant labour, the move to urban life is for many millions a story of the challenging landscape of the heart.

It radiates through South Africa's fine arts scene. Jan Tshikhuthula is one example.

Born and raised in Tzaneen, Limpopo, he received his original fine art education in Venda.

He then travelled to Jozi. A graduate of Newtown's Artist Proof Studio, he started with print-making, but in recent years has included charcoal and soft pastel landscapes that capture where he's come from and where he's going to.

"Most artists in Jozi have a similar story: one of struggling to get to the city, and then the struggle of surviving," he says.

"We reflect this in different ways. If I see a landscape during the day I copy it down at night. That landscape can be something I see with my eyes, or with my heart. I never work from photos. I copy straight from my mind."

Tshikhuthula was given his primary creative platform by prominent Venda artist Avhashoni Mainganye, who not only gave him technical skills and a career launch, but provided insights into the lives of today's generation of fine art elders such as David Koloane, Pat Mautloa and Sam Nhlengethwa.

Tshikhuthula is part of a new generation, driven by its collective energy. "When I wake up I think of what my people are doing, and creating, because we are on the same buzz. It's my peers who push me. If I don't wake up and paint or draw then I fear the buzz our generation has established will leave me behind."

Central to Tshikhuthula's internal creative experience are rural landscapes - but with the significant twist of industrial water installations.

Ed Young's art will definitely get you thinking, even if it your thoughts aren't complimentary, writes Paula Andropoulos
Lifestyle
4 years ago

His grandfather Jan worked on industrial water systems, so his landscapes invariably feature windmills, along with unusually gritty water machinery and equipment, which contrast strikingly with the sweeping colours and moods of the Venda region.

In Let it Go, the windmill is in fragments and losing its essential form, while in Tshikhuwan his traditional industrial water system forms the foundation of a city sprawl.

"The landscape of my heart is changing," he says. "The longer I spend in the city the more new metaphors and images come up. I'm still working on gathering history, using windmills and water pumps as a metaphor. Windmills are old things, but they pump up a lot of value. I am still on this idea, but it's growing. Life is moving into new forms and shapes. So am I."