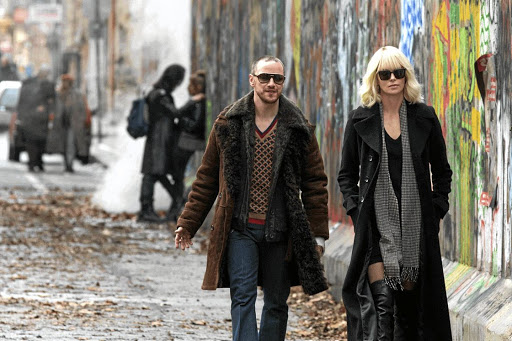 Based on a graphic novel and directed by stuntman David Leitch (who shot some scenes for John Wick), Atomic Blonde provides a chance for "our Charlize" to hone the action chops she displayed to good effect in Mad Max: Fury Road.

Here she plays Lorraine Broughton, who must travel to Berlin shortly before the fall of the Wall to find out what happened to a murdered fellow agent and retrieve a list of double agents for her masters.

She's aided by the off-the-wall and unpredictable "man in Berlin", David Percival (James McAvoy). The film cuts between Broughton's mission and her debriefing in London by two MI6 agents, played by Toby Jones and John Goodman.

All of which is an overcomplicated explanation of a plot that's thinner than a piece of Glad Wrap and serves as a poor excuse to watch Theron beat the crap out of a whole lot of bad guys while rocking some serious stilettos.

Charlize Theron is bold and dangerous in 'Atomic Blonde'

Get past the '80s music video feel and it's very watchable, says Matthew Vice
Lifestyle
4 years ago

It's essentially John Wick with better legs and Leitch's history as a stuntman becomes painfully obvious and tiresome as we quickly get the idea that "our Charlize" has developed her action skills in leaps and bounds since her ill-fated outing as Aeon Flux in 2005.

Dialogue is just something you have to put in to remind people that this is not a music video and some of the quips would put even the Italian Stallion to shame. Style is everything, substance is unnecessary and while that may be fine for a fashion magazine shoot, it's not enough to power a feature film.

It's very basic "skop, skiet en donder" stuff, which Theron's Benoni homeboys will no doubt cheer. While John Wick cinematographer Jonathan Sela gives the film his distinctive pink and blue-lit signature to complement Theron's icy charms, it's one of the most boring films in recent memory.

WATCH the trailer for Atomic Blonde