Spinning, the homegrown motorsport that has it's roots in gangster culture, will soon elect it's first-ever national team, writes Bonginkosi Ntiwane 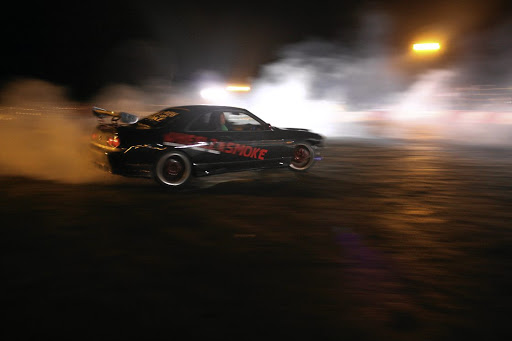 Shows at the Wheelz n Smoke Arena in the south of Johannesburg can attract anywhere between 600 and 1,500 people.
Image: Guy Mab

As I inhaled clouds of exhaust smoke, the sound of cars revving at the Wheelz n Smoke Arena in the south of Johannesburg took me back to when I first saw a spinning car as a five-year-old. This was after Bafana Bafana's Afcon triumph and Tembisa was in a state of euphoria. For years, spinning has been a huge subculture in black communities.

"Back in the day, whenever a guy from the township stole a car from the suburbs, he'd take it to any township and guys would spin the hell out of that car [the vehicle being destined to be stripped for parts]. They did this to show the community that they've cashed in," says Wheelz n Smoke founder Monde Hashe.

Because of that stigma - that spinning is a pastime for thugs - it still makes some people uncomfortable. Hashe, the Motorsport South Africa commissioner of spinning in the northern region and Southern Africa, is changing that.

Diesel to dust: a brave new world of electric motoring is fast approaching

From what's in the tank to who's in the driving seat, Thomas Falkiner speculates of the future of motor industry trends
Lifestyle
4 years ago

He wants South Africans to own spinning as their own thing. "We have this disease of not realising what we have till it's gone. People come here to get footage of cars spinning, take it abroad and then it's developed to suit their supremacy, and then come back and sell it to you!"

An episode of The Grand Tour (hosted by the Clarkson, Hammond and May trio of British engine geeks) featured Wheelz n Smoke. "We were honoured by their presence because local media doesn't give a shit about us or what we do here," says Hashe.

Spinning is one of the world's fastest-growing sports and Hashe says Mzansi is the trailblazer. "Everyone is learning about spinning through us."

After Hashe bought the arena - originally a motocross site - in 2011, he converted it to the 10ha home of Wheelz n Smoke, investing in buildings, running water, the pitch and the pavilion. Hashe pays all the spinners and provides their tyres.

"I'm not here to make money from spinning," he says. "The belief is that spinning will belong to the people, that one day we will realise the gold mine we have as black people."

The regular shows - on Thursdays - attract anywhere between 600 and 1,500 people. Crowd favourites include Stacey Lee, Eddie Rasta, and Bad Company - a Wheelz n Smoke brainchild. The last Thursday of the month is dedicated to them.

The four-strong spinning team will have you cringing as the Bad Company members jump in and out of a BMW 325i in motion.

The energy and chemistry of the members and the car make for great entertainment, while the smoke gives the show a touch of Houdini as one moment you see a member dance on top of the car and the next they are all outside the car as it spins by itself.

As long as people are screaming, it means we're doing the right thing

"We love what we do and as long as people are screaming, it means we're doing the right thing," says Mckeenan "Troubles" du Plessis of Bad Company.

Wheelz n Smoke launched the Spin Inc Series that will qualify six of the best spinners in the country. They will represent South Africa in the Gymkhana Grid world event at Carnival City in mid November.

The first-ever Protea car-spinning team will be selected on November 4, when the qualification rounds will take place.

Embracing spinning has presented some challenges for Motorsport South Africa, says its sporting service manager Wayne Riddell, because it's different from other forms of motorsport where competitors protect themselves with layers of safety gear. In spinning, "spectator safety must necessarily be treated as the number one priority".

Wheelz n Smoke hasn't had a fatal accident, says Ndu Ngwenya, who oversees things when Hashe is away for work. "Cars do crash from time to time but that's expected, hence we put in place those mitigation measures such as the concrete barricades and have medics on site."

A quick spinning lesson may not change the image of the sport, but perhaps 20 years from now a five-year-old might get to see the Spinning World Championships hosted somewhere in Alexandra.