How the Joburg Art Fair found its feet

What started out as a jumbled art supermarket has evolved into a prominent platform for contemporary artists, writes Mary Corrigall 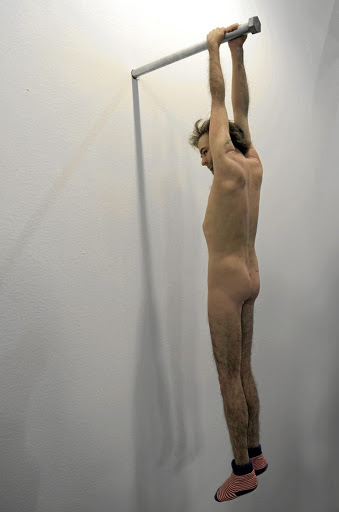 Ed Young's 'My Gallerist Made Me Do It' was an Instagram hit in 2012.
Image: Supplied

I was one of its most voracious critics. Back then it was a jumbled art supermarket with galleries flogging old works that had been knocking about in their store-rooms.

The then organiser and director, Ross Douglas of Artlogic, who has since sought out greener pastures in France, where he's pursuing other expos, was like the first gold digger to arrive before the Gold Rush of 1886.

He was blustering his way through unknown territory, knowing sponsorship deals could be lucrative, African art was a veritable goldmine and floor space of the Sandton Convention Centre could be prime art property.

Back in 2008, it was a very South African affair, so the African tag used to generate international attention was a bit of a misnomer.

Douglas suggested the fair was a viable replacement for the Joburg Biennale, which had ended after two iterations in the late 1990s due to a lack of funding - and other issues.

The Joburg Art Fair never proved to be a replacement for a Biennale-type event, which through tight and considered curation was a statement on art and how it figures in and comments on the ''now" - contemporary life.

However, it has become a prominent platform. It has also in recent years slowly shed its parochial outlook. The appointment of a British-based curator, Zoe Whitley, and the Nigerian winner of FNB art prize, Peju Alatise, for this year continues the internationalising of the fair.

If you wanted to make a bold art statement the Joburg Art Fair became the place to do it. But few artists challenged the art fair context itself. Those that did stood out.

The Avant Car Guard collective parodied the commercialised turn with the work Invoice (2008), a large-scale canvas showing an itemised bill made out to "The South African Art World" to the sum of R32,749,995.

It made it recently onto the secondary market and, it having only fetched R47,745.60, the art world owes the trio some money.

Auction house art star Ed Young quickly emerged as the must-see artist at the fair with his amusing, real-life works and scriptovisual statements such as I see Black People.

It was the work My Gallerist Made Me Do It, a small-scale nude of Young appearing to hang from a nail, which became an Instagram hit with schoolgirls in 2012.

That was the same year that Brett Murray's Dissent had everyone talking. It was a scripto-visual work depicting the word "silence" and literally broke his ''silence" after the whole Spear debacle.

A year later censorship gripped the fair when Douglas decided to pull Ayanda Mabulu's Yakhali'inkomo - Black Man's Cry from Commune 1's stand, in fear that the government funders would be irked by an artwork featuring President Jacob Zuma trampling on miners' heads.

The late Barend de Wet infiltrated the fairs with his usual wit. Aside from selling make-your-own sculpture kits in 2010, he once exhibited a toilet seat covered in a green crotchet design titled I Knit You Not.

Mary Sibande exploited the fairs too, releasing her latest sculptures - The Reign - after becoming an instant hit after her first solo exhibition at Gallery Momo.

Fortunately, over the decade the quantity of art at the fair has decreased, as tastes, knowledge and marketing approaches have matured.

Ultimately, it is not about being noticed at the fair that counts, but making the all-important sale, no matter what the critics say.

• The FNB Joburg Art Fair is on at the Sandton Convention Centre in Joburg from September 8 to 10.