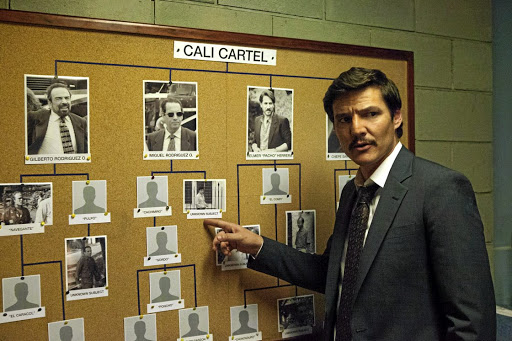 The third season of 'Narcos' deals with the Cali Cartel.
Image: Supplied

The red flags went up with the arrival of a third season of the true-life crime series, Narcos, now streaming on Netflix. Here was a period drama based on the life of Colombian cocaine trafficker and Medellin cartel boss Pablo Escobar. Given that our main character was shot dead at the end of season two, what would now drive the plot?

We forget, though, that nature abhors a vacuum. With Escobar out of the picture, it wasn't long before another bunch stepped up to the plate: the Cali cartel. One monster has been replaced by a family of monsters.

The third season is thus more of an ensemble work and opens some years after Escobar's death. It is now the early 1990s, and US drug enforcement policy is being shaped by the Clinton administration.

What to watch now 'Game of Thrones' is over

Got Daenerys withdrawal symptoms? There are plenty of shows on the way to ease the craving
Lifestyle
4 years ago

The Cali cartel - brothers Gilberto and Miguel Rodriguez (Damian Alcazar and Francisco Denis), Pacho Herrera (Alberto Ammann) and Chepe Santacruz-Londono (Pepe Rapazote) - control the production and trafficking of 80% of the world's cocaine, an operation that employs 700,000 people. In addition, these were the guys who wrote the book on money-laundering.

Unlike Escobar, the "Gentlemen of Cali", as they were known, preferred a low profile. As DEA agent Javier Peña (Pedro Pascal), this season's narrator, informs us in the first episode, not for them the flashy "Robin Hood" antics of Escobar, or his "signature"-style executions that left no one in doubt as to who was boss. With the Cali cartel, the bodies simply vanished. End of story.

But now things are changing. Gilberto Rodriguez has devised an "exit strategy": he proposes that, in six months, the cartel shut down their cocaine operation and hand themselves over to the authorities.

In exchange, the Colombian government, corrupt and in the cartel's pocket, lets them keep the considerable spoils of their trade, which, after serving brief nominal sentences in minimum-security, country club-type jails, they can happily enjoy as free men. And the spoils are considerable, billions of dollars.

Is binge-watching series bad for your mental health?

Until then, Rodriguez suggests, they intensify business and rake in as much cash as possible.

Not all cartel members think this an attractive proposition. One man, in particular, is profoundly uneasy; Jorge Salcedo (Matias Varela), the mild-mannered head of Cali security, fears (correctly, as it turns out) that matters are about to get extremely messy in the coming months, and wants out immediately. He is, however, persuaded to stick around, and it's here that the third season comes into its own regarding edge-of-seat tension.

Creators Chris Brancato, Carlo Barnard and Doug Miro may have laid on the artistic licence a little too thickly with Salcedo, and it's doubtful the cartel's security boss would have been such a likable character in real life, an everyman with an aversion to violence, who eschewed firearms for a walkie-talkie.

WATCH the trailer for Season 3 for Narcos

It also strains credibility that, as a security honcho, Salcedo may now be unaware he's getting in over his head.

This is a minor concern, one that's swept aside once the bloodbath starts. The bodies are no longer disappearing, and the continued skilful use of archival news footage, blurring the line between documentary and entertainment, serves as a startling reminder that these events actually took place.

The series is beautifully shot. Colombia's inner city seediness is contrasted with the vulgar luxury of the cocaine barons' palatial country homes, which in turn is juxtaposed with the wilderness of the countryside. The real jungles, however, are the chambers of bureaucracy in Bogota. Here it is all greased palms, treachery and betrayal as the levels of corruption are peeled back like layers of an onion.